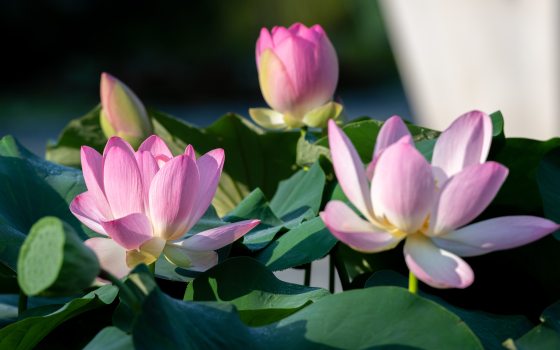 When put to the task of naming one’s favorite plants, most people run through a mental list of photosynthetic friends they consider to be beautiful, interesting, useful, or symbolic. While many flowers are worthy of captivating our attention, few have inspired hearts and minds throughout the ages quite like the lotus … a beautiful, interesting plant that is not only extremely useful but also incredibly symbolic.

What is a Lotus?

Only two species of true lotus exist: Nelumbo lutea is native to eastern and central North America, while Nelumbo nucifera is native to most of Asia and northern Australia.

Though this seems impossibly small, there are nearly 1,000 cultivars (cultivated varieties), which give us the various sizes, the array of flower colors, and the strikingly unique morphologies that make up the diverse complement of lotus forms that we have all grown to love. This makes Nelumbo an absolute must to accompany and complete any aquatic or semi-aquatic garden design.

Historically, the “Blue Lotus of the Nile” and the “Blue Lotus of India” are often thought of when you hear references to “lotus”.  However, they are not lotus at all, but instead Nymphaea caerulea and Nymphaea stellata respectively. Nymphaea is the botanical name for the waterlily genus, and throughout the ages, in many different cultures, the words “lotus” and “waterlily” were used by the general populous interchangeably. This illustrates the importance of adhering to proper botanical nomenclature when describing a plant … this universal binomial language makes sure we are all talking about the same thing. So, when you ask a gardener what a plant is, don’t be upset when they respond in Latin. They are just giving you the most accurate answer that they can!

Longwood has an array of different hybrid lotus cultivars. Each season, we select cultivars from our collection to include in our Waterlily Display and complement its overall design. This summer’s display design includes the cultivars ‘Perry’s Giant Sunburst’, ‘Mrs. Perry D. Slocum’, and the straight species Nelumbo nucifera in the center of the round pool.

The lotus requires at least three months of daily high temperatures in excess of 75°F before the most profuse bloom. Here at Longwood, we start our lotus growth in a heated greenhouse, and the best time to view these lovely blooms is mid- to late July and on into August.

“The lotus flower holds a special place for us, because it symbolizes our struggle in this world. It is born in the still waters of the pond, underneath the mud, and when the time comes, it emerges. It grows out of the water and straight toward the sky, opening its petals in the rays of warm sunlight, revealing its beauty and sharing its fragrance with the world, leaving the mud far behind. Even its leaves are water resistant, as the flower reaches toward the sky; somehow existing as part of its environment, and separate from it at the same time.”  - The Buu Mon Buddhist Temple

Emerging from the murky waters into the bright clear day is how the sacred lotus (Nelumbo nucifera) first became a symbol of enlightenment. The fact that the sacred lotus is able to emerge without any trace of the muddy depths from which it was born is how it became associated with purity; its ability to do so defies logic. Further elevating its sacred status, it’s reputed that Buddha rose up from the heart of a lotus bud more than 2,500 years ago.

Hindi spiritual writings include descriptions of the lotus and connections to the deity Lakshmi, also known as the goddess Padma … Padma meaning “lotus”. Lakshmi holds many names and titles, just as the sacred flower does: she is the goddess of wealth, auspiciousness, fortune, and luck. The lotus was also described in Ancient Egyptian mythology as being closely related to the sun, as it blooms by day and closes at night.

There are many ways in which the lotus has influenced science and culture throughout history, and it continues to do so today. The “water resistant” foliage of the lotus has inspired a branch of study known as The Lotus Effect, referring to a scientific characterization known as superhydrophobicity. Water spilled on a superhydrophobic surface does not wet the surface, but simply rolls off, picking up and carrying away any foreign material, such as dust or dirt, along its way.

Inspired by nature, several self-cleaning superhydrophobic products are being engineered today, and seem to be destined to become crucially important in our everyday lives. These superhydrophobic products include coatings that reduce the water drag on boats and protect surfaces and equipment exposed to fresh or saltwater; building materials that remain clean with little maintenance; and textiles that are resistant to staining and/or remain dry when submerged in water. All of these products serve as examples of “biomimicry” … buy understanding how lotus leaves create superhydrophobic surfaces, engineers have been able to develop artificial surfaces that “mimic” the properties of their natural counterparts. Perhaps they can finally find a way to get ketchup out of the bottle without so much struggle!

In addition to their superhydrophobic nature, there are other ways in which the lotus has been useful to humans (from before a time of nanotechnologists). Chief among these uses is as a food source. That’s right … people eat them! Lotus seeds may be eaten raw, candied, pickled, or cooked. They can also be roasted and puffed like popcorn or even used to make a flour. The tubers of lotus (underground swollen stem used for storage) are as important as a food source in Asia as the potato is here in the United States!

All parts of the lotus can supposedly be used for medicinal purposes. Scientific research continues today to rate its efficacy for treatment of ailments, and to investigate the viability of lotus as a sustainable medicinal resource.

Enthralling and inspiring poets, artists, spiritualists, gardeners, scientists, and historians for thousands of years, the lotus is a unique (and beautiful) gift that we should all take the time to stop and appreciate.