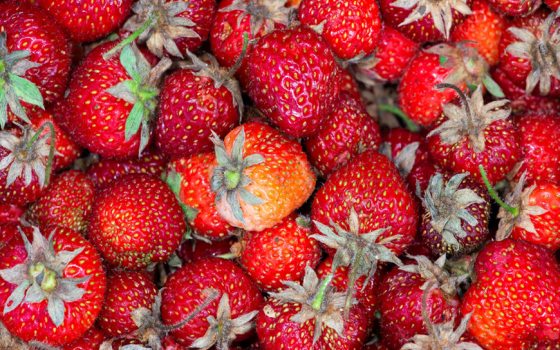 Get to Know Our Strawberry Brew

As consumers we often prioritize simplicity in our food selections, as a short ingredient list essentially confirms the purity and integrity of a product. It was the Germans who first moved to codify this notion when writing the rules for their most precious food item … beer.

The Reinheitsgebot, meaning “purity order,” was adopted across all of Bavaria in 1516. It prescribed that all beer must only contain water, malted barley, and hops. Yeast—a key ingredient, as the catalyst of fermentation—was not included as it had yet to be identified at the time of Reinheitsgebot’s adoption. Having trained in Germany, Ron Barchet and I, the founders of Victory, take the purity of our beers very seriously and adhere to the Reinheitsgebot for most of our offerings. But occasionally an ingredient is so compelling that it makes its way into a recipe for a great new innovation at Victory, taking us beyond the Reinheitsgebot approach.

With Longwood Gardens as a local producer and partner, we are proud to have regularly incorporated the fresh ingredients grown at Longwood in our beers since 2015, with nectarines, peaches, grapefruit, honey, and strawberries making their way from Longwood to our nearby brewing kettles at Victory.

One of the creations to come of our collaboration with Longwood—and the beer that’s currently being featured in Longwood’s Beer Garden—is Longwood Seasons: Summer Strawberry. With flavor components that register in our brains as tasting both sweet and tart, strawberries are a complex ingredient that require careful consideration when becoming a component of a delicious beer.

For the brew, we’ve added a full 10% of the strawberry puree to have a sizable impact on both flavor and aroma, as compared to 3% or less puree we’ve added to prior beers with fruit additions. The turbidity of this beer is due to a number of factors, primarily wheat malt and oats in the grist, and the strawberry puree addition. All of this was planned and expected, except for the final hazy, almost opaque look of the product, which is perhaps due to the higher than anticipated addition of strawberry puree. Fortunately, our local consumers who seem very accepting of the attributes of fresh, natural ingredients have voiced no concerns about the appearance of Longwood Seasons: Summer Strawberry. Most likely, they simply appreciate the lush mouthfeel, an attribute of the increased viscosity, and full flavor that this beer delivers to them.

When it comes to the more traditional beer ingredients of this unique recipe, a high percentage of pilsner malt in the mix contributes sensations of crisp cereal grains and a bread-like sweetness that balances tart sensations of the natural strawberry. Additionally, American-grown Simcoe hops that offer a range of pleasant aromas and flavor sensations that you might describe as piney, citrusy, and even minty are added in the boil kettle. We use the most natural form of hops here at Victory, whole flowers, over processed pellets and oils to assure that all the natural flavors that Mother Nature produces make it from field to glass in order to deliver flavor.

Perhaps the “less is more” attitude of the Germans when it came to beer brewing was also driven by the understanding that with each additional ingredient the flavor outcome becomes less predictable, as this story illustrates. Fortunately for all of us enjoying Longwood Seasons: Summer Strawberry right now, the quality of ingredients produced locally at Longwood Gardens is of consistent high quality. With partners like the horticulturists and chefs at Longwood Gardens, we at Victory are more than happy to take calculated risks in formulating innovative beers for the enjoyment of our local audience. So, raise a glass to innovation, local partnership, and production and an enduring notion about purity that is over 500 years old.

Take a closer look (and taste) at our brews during Longwood’s Meet the Experts event during Festive Friday: Brews & Bands on Friday, August 16 at 6 pm, when I join Victory’s Director of Brewery Operations James Gentile, Longwood Beer Garden Chef Adam Kapa, and Longwood Horticulturist Tim Erdmann for an entertaining discussion on Longwood and Victory’s fruitful partnership, which includes a detailed look at our Longwood Seasons: Summer Strawberry brewing process.