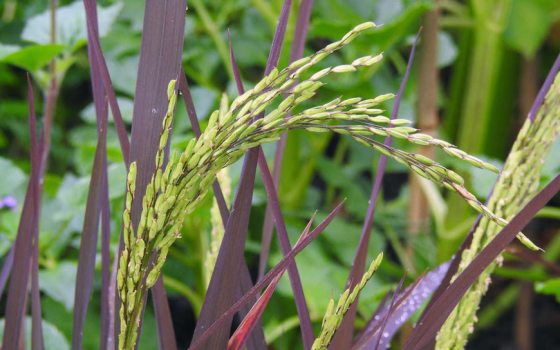 The Beauty and Bounty of Grasses

The grass family, or Poaceae, is one of the largest families of flowering plants, with more than 10,000 species. Common members of this family include species of turf grass and meadow grass. Even bamboo and sugarcane (Saccharum officinarum) are grasses. Plants in this family have flowers that are typically wind-pollinated and have leaves that are long and narrow with parallel veins. It may come as a surprise that the grass family is also the plant family most responsible for feeding humankind. Cereals such as wheat, rice, barley, oats, rye, corn, millet, and sorghum are all in this family, and feed not only humans, but also livestock raised for food. Right now, beautiful examples of corn, rice, and sorghum in our Vegetable Garden (nestled in our Idea Garden) and even our Waterlily Display demonstrate the breadth and bounty of the amazing grass family.

Rice, Oryza sativa, has been cultivated in Asia for over 8,000 years. At Longwood we use rice ornamentally in our Waterlily Display each year. The dark foliage of ‘Black Madras’ add contrast to the developing rice grains and beautifully complement our surrounding aquatic plants.  Rice grows well in wet or flooded areas and over half of the world’s rice supply is grown in wetland paddies.

One of the most well-known members of the grass family, corn or maize (Zea mays) is one of the top three cereals of the world, along with wheat and rice. Indigenous to Central America, corn has been cultivated for at least 7,500 years and nearly half the corn grown worldwide comes from the United States.

Besides being delicious eaten fresh this time of year, this grass is used as a flour, a thickening agent, a sugar, an oil, and most often food for livestock. This year in our Vegetable Garden we are growing Zea mays ‘Silver Queen’ and an ornamental variety called ‘Japonica’ … two members of the same species with strikingly different appearances.

Corn is an interesting grass because it has male and female flowers at different locations on the stem.  The “tassel” at the top of the plant is the male flower, while the female flowers are lower on the stem with a silky plume, which form the ears. The “ear” of corn is a seed head, the largest in the grass family.  The individual grains are in rows on a “cob”. There can be 1,200 grains on a single cob and each corn plant can develop one or two ears.

Sorghum or broom-corn (Sorghum bicolor) is another important cereal crop in the world, following wheat, rice, and maize. It is indigenous to Africa and was domesticated about 5,000 years ago. With long, flat leaves and feathery seed heads, these plants have the typical look of plants in the grass family. This year we are growing Sorghum bicolor ‘Sand Mountain’ in our Vegetable Garden, which can get to 10 feet tall.  The grain is used to make flour and the stem can be made into a sweet syrup. Broom-corn can also be used in dried flower arrangements and was traditionally used to make brooms.

Members of the grass family can also be found throughout the approximately 150 acres of contracted farmland situated on Longwood’s property. Corn and wheat, both representative of the grass family, are two of the primary crops grown and harvested on this land, in addition to soybean and hay. The sustainable farming of such crops speaks to Longwood’s dedication to furthering the connections between people and their food … and the breadth and bounty of the Poaceae is one driving factor in those efforts.