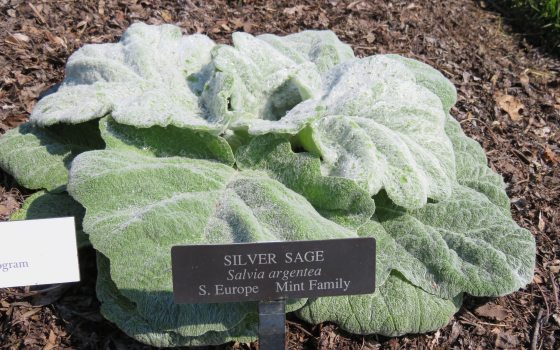 Getting to Know Plants by Name

Editor’s Note: Get to know many plants by name—and so much more—with our free online course, The World of Plants: Exploring Horticulture. Now open for registration, this self-paced, fun, and informative course follows the evolution and diversity of plants, covers the basics of plant nomenclature and plant identification, takes you behind-the-scenes at Longwood, and more.

When you meet a person for the first time you typically learn their name. The closer you are with a person, the more parts of their name you get to know. Names, in general, allow us to make an association with an object, living or not, and are a basic facet of our everyday life. In the world of biology, living things have scientific names … and plants are no exception. Botanical nomenclature is assigning these names to plants and then putting them to use. While you may feel overwhelmed by the idea of scientific names, as they are sometimes long and difficult to pronounce or spell, scientific names can reveal a lot about the plant in question. Taking the time to learn a plant’s scientific name can bring about a deeper connection to that plant, as well as a better appreciation for nature and the natural order of things.

Why bother with scientific names when most plants have some kind of common name? Many common names originate with lay people who have passed them down through the generations, developed in the person’s native language and usually descriptive of the plant’s appearance or usage. In modern day, we might not even understand the meanings of some of these common names (for example, mugwort, the common name for Artemisia) used in the past, yet they still linger today. Some common names were developed before taxonomists determined the relationships between different species. Therefore, a plant could have a common name in several languages (but not your language) and plants that look similar (but are not related) could have the same common name.

There is order to scientific names, thanks to a set of rules called the International Code of Nomenclature for algae, fungi, and plants. But you don’t have to be Carl Linnaeus to understand and use them. Scientific names, which are Latin-derived “official names” allow people from around the world to communicate about plants and help us all speak the same language when identifying plants.

Botanical taxonomy, or the study of systematics and classification of plants, is based on a hierarchy.  In the world of horticulture and home gardening, the species name and named selections of that species or hybrids between the different species will be the most important name to know when communicating about a plant, so these are the names that will be discussed.

There are parts to a scientific name.  The first part is called the generic name and it is capitalized and in italics. This is the name of the genus, which in the taxonomic hierarchy is below family. Plants that are closely related are placed in the same genus. There are many generic names that you already know, such as Magnolia, Impatiens, Rhododendron, Hibiscus, Hydrangea. You know these because they also serve as common names, so you are already ahead of the game getting to know scientific plant names!

Generic names could be the classical Latin name of the plant, like Acer, the ancient Latin for maple. Or they may have been created to commemorate a historical person, like Jeffersonia, named for Thomas Jefferson, or a mythical god, such as Adonis. Generic names also can be combinations of Latin or Greek words to describe the plant, as in Chlorophytum, which in Greek means green plant.

Just like generic names, specific epithets also have meaning. The name Magnolia grandiflora describes this magnolia species as having large flowers. Specific epithets can be geographic place names such as countries, states, rivers, mountains, or regions in which the plant grows (for example, Acer pensylvanicum or Rhododendron atlanticum). They can tell you something about the plant, such as the size or shape of the leaf or color of the flower; for example, Pellaea rotundifolia, with rounded leaves or Trillium luteum, with yellow flowers.  These names can also describe the plant’s habit, Amelanchier arborea (tree-like) or growth characteristics, Ajuga reptans (prostrate and creeping).

Finally, many plants in the horticulture trade are hybrids or cultivated varieties (cultivars) of species and have a third word or set of words called the cultivar epithet. These names appear after the specific epithet or in the case of some hybrids, after the generic name and are in plain text and appear in single quotes. Cultivar epithets are typically easier to learn for home gardeners since they were developed in a modern language (not necessarily English, though). Since these names indicate a specific clone of the species that offers particular characteristics, when shopping for a plant you will need to know the cultivar epithet of the plant you desire.

Happily, there are numerous resources available to help you dive into the world of botanical nomenclature, including our free online course, The World of Plants: Exploring Horticulture. Now open for registration, this free learning experience allows you to journey the breadth of the plant kingdom, follow the evolutionary pathway to plant diversity, and learn the basics of plant nomenclature and plant identification. With interest and practice, using scientific names when thinking about or discussing plants will become easier. Before you know it, when you see your favorite plant you’ll find yourself addressing it by its proper name … just like an old friend.