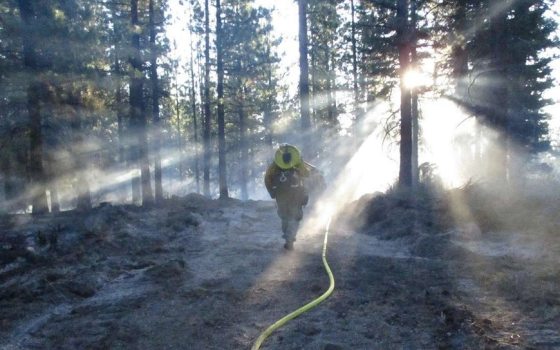 Fighting Fire in the Face of a Pandemic

As Longwood’s Land Stewardship Operations Manager, a Chester County forest fire warden and first responder, and a wildland firefighter, it’s my absolute honor to protect the landscape … both near and far. In mid-August, I returned home after a three-week deployment to help fight the Northern California wildfires, which served as my fourth western US deployment, in addition to about a dozen in-state deployments over the last five years. As every fire assignment proves to be, it was an uphill battle, especially given this assignment’s COVID-19 considerations and related precautions we had to take while fighting the wildfire. But it was also a time of hope, a time of togetherness, and a time of accomplishment, even in the face of so many challenges.

Here at Longwood, I focus on stewarding our natural lands using strategies based on an understanding of ecosystems and adaptive land management strategies ranging from invasive plant management via mowing and prescribed burning to maintain our meadow’s health. As a first responder and wildland firefighter, I’m trained to understand fire behavior and fire effects, and how to effectively protect national lands from wildfire damage. There is always more to learn and more training to do, and my latest deployment proved to be an experience I won’t soon forget.

For this summer’s deployment, I set out from just outside State College, PA as part of a 20-person crew of trained state and local volunteer wildland firefighters under the leadership of a crew boss and three squad bosses. Each crew lives and works together throughout the assignment, which typically lasts 14 to 16 days, accomplishing work on the fire line as a cohesive unit. This year, in the face of COVID-19, the term “cohesive unit” took on a whole new form. Typically, we fly to a deployment, following strict weight requirements for the flight when packing our allotted 45 pounds of gear, including our flame resistant clothing, leather boots, hardhat, leather gloves, eye protection, and a fire shelter, as well as our own tent and sleeping bag.

Instead of flying, this year we drove across the country in a caravan of seven pick-up trucks to minimize potential exposure to COVID via flight. Unlike past fire assignments, this time I knew just a few members of the crew, which turned out to be a great aspect of the trip, as I was able to build new friendships and professional connections. Prior to leaving, we all completed health questionnaires and screening in response to COVID and immediately had to adopt a mentality of a “module of one” to keep the entire crew safe from COVID. We were together in this venture and had to keep each and every one of us safe and healthy. I found myself having to retrain my brain in the first couple days we were together, knowing I would be living and working in close quarters with the crew for the three-week deployment. Because of COVID, being in such close proximity to others was something I had not been accustomed to over the last several months prior to deployment.

We were given a plentiful supply of personal protective equipment to keep ourselves safe throughout the duration of the trip, and we practiced COVID-related best practices at all times. Once at the fire site, we stayed within our 20-person crew module and practiced social distancing when near other crews. We wore masks when in proximity with other crews and even participated in some fire briefings via Skype. We picked up box meals from catering trailers and ate only with those in our crew; there was no shared café area, no shared tables, no shared condiments. Our restrooms were cleaned constantly, amid many other hygiene practices. While COVID was constantly on my mind, I felt safe. Simply put, COVID did not get in the way of us doing the job we were there to do.

While there, our crew worked 16-hour days. I clocked 328 hours over 21 days, some days hiking 2,000- to 3,000-foot elevations while carrying my 45-pound gear bag in daytime temperatures of up to 95 degrees. That kind of work requires year-round physical and mental training, and it’s what I love to do.

Throughout our time there, we fought two fires ranging from benign to extreme. Our conditions were intense, as the energy release component was at a record low, meaning the amount of energy needed to ignite was low. As a result, the fire was prone to high rates of spread and prone to burning live, healthy trees. This summer’s hot temperatures and periods of drought also served as complicating factors.

During our first week, we worked night shift at the July Complex fire in the Lava Beds National Monument Area among the 200 to 300 people working that fire, with our crew monitoring the fire overnight. We were stationed in a very rocky area, so we were limited on where we could go in order to protect ourselves from slips and falls.

Our second assignment was the Stump Fire in Lassen National Forest. We worked the day shift for that fire, which had its strenuous to its unexpected moments. We completed such physically demanding tasks as installing water lines and sprinkler systems to bolster fire breaks and protect surrounding homes and buildings, as well as using hand tools to construct firebreaks, or gaps in vegetation that act as barriers to slow or stop a wildfire’s progress.

One of our daytime assignments was to monitor for ember wind spread in a nearby pasture that had been cleared of its cattle prior to our arrival … or so we thought. While monitoring for embers, we had a 1,000-pound bull, inadvertently left behind and hiding outside of the pasture, become annoyed at our presence and charged one of the crewmembers. While it was a potentially dangerous situation, nobody was hurt and the story eventually added some levity to a challenging day.

While aerial work is a typical response to wildfires, we saw a far increased aerial response because of COVID, to help reduce the number of responders on the ground and help keep on-ground crews socially distanced. We watched as many helicopters and planes worked to help get the fire out as quickly as possible, in hopes of dispatching on-ground crews away from the fire and reducing the need for on-ground responders.

It was a grueling fire assignment made more complicated by COVID, but the deployment represented what I love to do as a first responder: protect the land and protect and serve the people. The crew worked together in new ways, fighting not only fire, but also the threat of COVID this time, and it was nothing short of a personally and professionally fulfilling trip. While there I was manifested as a squad boss trainee. Initially I worked under my squad boss actual for the first six days and then was given the reins as acting squad boss for the remainder of the trip, marking my first time training as a squad boss on an out-of-state deployment. Already qualified in-state, this experience gets me closer to obtaining my national squad boss qualification, which I continue to work towards.

I was also able to successfully complete my fire line tree Faller 2 qualification during the deployment. Fallers follow established procedures in securing the fire line by cutting down both living and already burned trees to deprive a fire of additional fuel. While there, I cut down three 60-to 100-foot trees of varying difficulties via primarily lean and desired lay of the tree, as well as rotten and fire damaged trees to pass my Faller 2 certification exam.

I returned home exhausted, yet motivated. I brought home my new qualification, new knowledge, and new experiences to apply here at Longwood with our prescribed burns and to apply to my next wildfire deployment when that time comes. Stewarding the land during such deployments out west in turn stewards the land back home at Longwood. These experiences help us learn, help us grow the field of fire ecology, and help us use science to protect our natural lands … no matter the challenges we face along the way.