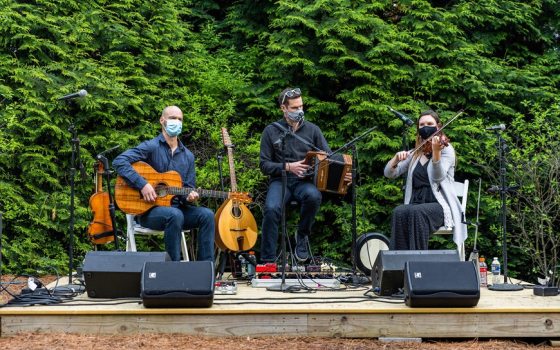 Last spring, we found ourselves suddenly facing many difficult decisions—decisions that had to be made in order to keep our guests and staff safe during the onset of a very challenging time. One such decision was having to suspend the 2020 live music in our Beer Garden season. Not only is live music in the Beer Garden a favorite offering for our guests, but a way in which we proudly showcase and share the talent of local performers ... and we have missed these performers, and their unique sounds in our starlit Beer Garden setting, tremendously. With that, we are beyond thrilled to once again offer live music in the Beer Garden, welcoming back these talented local performers to once again treat us to their vibrant sounds of bluegrass, traditional Cuban and Latin jazz, Caribbean steel pan, and much, much more in the unforgettable setting of our Beer Garden.

As in years past, live music in the Beer Garden will take place Thursday, Friday, and Saturday evenings from May through October (6–9 pm May 26 through August 28, and 5–8 pm September 2 through October 30). This year, however, you’ll notice a few changes. To start the season, all of our Beer Garden performers will be playing only instrumental music and will be performing as no more than trios, to allow for plenty of space for our performers on the stage. While we look forward to the return of vocal performances, and welcoming back more members of each group, we will continue to assess our offerings as we remain dedicated to creating a safe, enjoyable, and fun Beer Garden experience for all. Look for each month’s Beer Garden lineup, which we’ll release as we go throughout the summer.

Speaking of an enjoyable and fun Beer Garden experience … here’s what you can expect to see (and hear!) in the coming months. We’re excited to bring back Beer Garden performer mainstays, from the traditional Celtic trio Poor Man’s Gambit to the lively traditional Cuban and Latin jazz group Conjunto Philadelphia to Ensemble Novo, playing samba and the music of Brazil … as well as some new performers, including Drew Nugent & The Midnight Society (playing Jazz Age blues, jazz, and pop) and Flexible Flyer Bluegrass. Some of our Beer Garden performers will need to shift their traditional delivery in order to share purely instrumental performances, often with less members of their group than they’re accustomed … but are looking forward to being on the Beer Garden stage, as they reflect on the trials and tribulations of the last year.

Jeff Torchon of Conjunto Philadelphia—an ensemble who has performed at Longwood since 2017, sharing the music of pre-revolutionary Cuba—shares that “The band has been pretty dormant for the past year. The only performance we played was actually at Longwood when we recorded a video by the Italian Water Garden. It was an amazing opportunity for the band to perform together … Otherwise, I haven’t been performing, especially while having a toddler at home during the pandemic and being in school (I’m a PHD student at Temple University in music education).” Upon their Beer Garden return, Conjunto Philadelphia will be sharing with us instrumental Cuban music and Latin jazz, as opposed to their normal Cuban music with vocals. “Cuban music does have a tradition of instrumental music, so this is an opportunity for us to showcase a different aspect of Cuban music,” shares Torchon.

Conjunto Philadelphia shared their authentic, vibrant take on traditional Cuban music, filmed amid a lovely Longwood backdrop this past fall.

Performer and teacher of Caribbean steel drums, as well as a member of Plenty Pepper Steel Band—a local band specializing in the spectacular sounds of Caribbean steel pan—Kristian Paradis reflects on the last year, calling it a trial: “We had nearly all of our scheduled performances for the last year canceled, and even figuring out how to rehearse in a responsible and safe manner has been a challenge … it’s been a blow to my psyche to not be able to share music with my audience and my fellow musicians. I have been able to use the extra time I found myself with to learn and arrange a lot of new music, so we’ll have plenty of new material to perform.” The band will be performing as a trio instead of a five- to 10-piece band as they’ve performed in the past, but will still treat us to classic and current calypso songs from Trinidad and Tobago mixed with tunes that will be familiar to a non-Caribbean audience, drawn from popular, jazz, and even classical traditions. “The smaller group can be a lot more flexible in terms of allowing for improvisation and responding to audience requests,” shares Paradis. “The reduced instrumentation gives us the opportunity to explore the softer, more relaxing side of steel band music as well … I think everybody needs a little music therapy right now.”

To help celebrate the return of live music in the Beer Garden, Plenty Pepper Steel Band recently treated us to fantastic Caribbean steel pan tunes in the beauty of our Conservatory.

Frequent Beer Garden performer, solo artist, and member of Marc Silver & The Stonethrowers—a Philadelphia-based bluegrass/Americana group—Marc Silver is looking forward to their Longwood return, sharing “There’s nothing like an evening under the stars and lights at Longwood Gardens, a jubilant audience, and the companionship of The Stonethrowers.” The trio will be featuring a variety of original songs, traditional fiddle tunes, swing, and jazz, courtesy of their multi-instrumental approach with dobro, mandolin, banjo, fiddle, and guitar. “The atmosphere, the personnel, the patrons, the lights, the three hours of playing music together … Longwood has become the glue that has kept The Stonethrowers together,” shares Silver. “Playing three hours of instrumental music is no small task, “he continues. “We’ll be digging deep into the repertoire to mix up the sound, challenge ourselves, and shake off all the rust. It will be joyous!”

While traditional Celtic group Poor Man’s Gambit normally operates as a trio, the challenge of performing only instrumental music presents a new opportunity for the group. Corey Purcell of Poor Man’s Gambit—who has performed in the Beer Garden since 2018—shares their excitement for their Beer Garden return: “It’s a performance experience that we look forward to every time,” he shares. “The Longwood guests are always a pleasure to play for, and the staff have become good friends over the years. Under normal circumstances we incorporate vocals on about half of our numbers, but in preparation for these upcoming Beer Garden performances, we’ve worked up some additional instrumental sets that we’re very excited about.”

This past March, we recorded Poor Man’s Gambit as they took us on a musical tour of traditional and original Irish music in the lush green surroundings of our Conservatory.

For Tom Moon of Ensemble Novo, who plays samba and the music of Brazil “just meant for the warm weather outside,” the sudden evaporation of performance opportunities brought on by the onset of the pandemic was “very strange … because with Ensemble Novo, there’s a cumulative thing that happens because we play together regularly,” he shares. “Our intuition becomes sharp and that’s when music feels like what psychologists call pure flow. It’s an energy state and I think musicians miss it on a visceral cellular level when there are no chances to make music.” While Moon shares that Ensemble Novo has always been primarily instrumental, “we will mix things up this year, inviting different musicians and exploring a bit further away from samba and bossa nova.”

Guests can enjoy the diverse sounds of these fantastic groups while once again enjoying the unique collection of botanically inspired beers produced with ingredients grown right here in our Gardens in partnership with Victory Brewing Company. The grapefruit-infused Longwood Seasons: Oro Blanco brew will kick off the season, followed by Longwood Seasons: Summer Strawberry later in summer. We’re delighted to welcome you back to the sights, sounds, and fun of live music in the Beer Garden, and we’re honored to once again share the spectacular music and camaraderie of our talented, passionate Beer Garden performers … see you there!