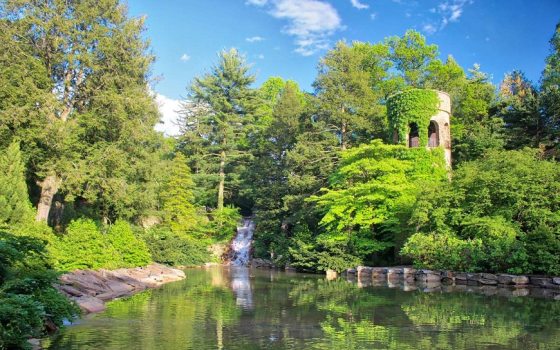 The happy sounds of our carillon concerts are ringing once again throughout our Gardens and we couldn’t be more pleased to hear them.

Our live carillon concerts—held on select Sunday afternoons through September—allow our 62-bell, five-octave Longwood Carillon to truly shine … especially at the hands of the talented carillonneurs who expertly showcase the spectacular musical range of this massive instrument. During these concerts, the carillonneurs perform—while perched at the top of our Chimes Tower’s 82-step spiral staircase, nestled in a small cabin that houses the Longwood Carillon’s computer (for the automatic play) and playing console (for manual playing)—and from there make our whimsical, fairytale-like tower come to life. It’s here, amid the lovely setting of our Chimes Tower, that these carillonneurs play traditional to totally unexpected selections that not only honor the long legacy of carillon music here at Longwood, but also pique the interest (and ears!) of those who may not be familiar with all this mighty instrument can do.

Longwood founder Pierre S. du Pont built our iconic Chimes Tower in 1929–30, where it overlooks a rushing waterfall that cascades from spring through fall. Since that time, the Chimes Tower has been home to a series of impressive bell-like instruments , the first a set of 25 tubular chimes purchased by Mr. du Pont that first started ringing in April 1930, marking the quarter hours during the day and playing on Sundays. In 1956, electronic bell devices were installed before the carillon was disconnected in 1981. Longwood was without audible chimes until 2001. In 2000, Longwood decided to install authentic bells and commissioned the Dutch firm Royal Eijsbouts to create the 62-bell carillon that remains today. The Longwood Carillon features centuries-old casting techniques with modern technology, as Royal Eijsbouts used computer aided design software to design the instrument but cast the bells in the traditional, time-honored way.

Carillonneur Lisa Lonie kicked off our summer 2021 live carillon series with her May 23 performance from the Chimes Tower.

After the bells arrived at Longwood from the Netherlands in March 2001, the instrument’s steel frame was built in the drained Pear-Shaped Basin next to the Chimes Tower, and the 62 bells were then bolted to the frame. After removing the roof of the Chimes Tower, a crane lifted the 38,148-pound bells and the 17,000-pound frame to the top of the tower, with only inches to spare. A new roof was then installed and the instrument inaugurated on Memorial Day, 2001. The Longwood Carillon is one of about only 630 carillons worldwide, measuring the tenth largest per number of bells and 30th by weight in North America. Its smallest bell is only 6 inches in diameter and weighs 20 pounds, while its largest is almost 6 feet in diameter and weighs a staggering 6,908 pounds.

The Longwood Carillon can be played in several ways, both automatically and manually, and can even be controlled from afar … including from the Netherlands, where Royal Eijsbourts can diagnose problems and make tweaks from their office.

During our live carillon concerts, the Longwood Carillon is played the traditional way, with a live performer at its 6-foot-wide baton keyboard that features 62 large wooden batons for the hands and 26 pedals for the feet. The keys are laid out sequentially, much like a piano or organ, but are much larger. In fact, playing a fast piece that uses lots of bells required the carillonneur to reach for far-away keys in both directions. Each large wooden baton key pulls a wire that runs vertically through the ceiling to a rocker arm, which in turn pulls a horizonal wire connected to the clapper. The clapper moves only an inch or so yet can make a soft or loud sound, depending on how forcefully the carillonneur strikes the key.

We’re thrilled to welcome four expert carillonneurs as they perform on the Longwood Carillon during this summer’s carillon concerts. On June 27, carillonneur Janet Tebbel will present a program including “some arrangements of well-known classical music, several compositions by women composers, and a few arrangements that will catch the ear … like Bohemian Rhapsody!” Carillonneur of the First United Methodist Church of Germantown, where she has played the 50-bell Taylor carillon since 1979, as well as carillonneur of the Miraculous Medal Shrine in the historic Germantown section of Philadelphia, Tebbel marks her return to Longwood as “thrilling.” When asked how she was able to keep up with playing the carillon over the last year, Tebbel shares that she was “fortunate to be able to play one of my two instruments throughout quarantine. In fact, I played 36 half-hour ‘quarantine recitals’ for the neighborhood in March through June of 2020. I kept it light, playing popular, hymns, and well-known classical transcriptions. The response from the neighborhood was very positive and I frequently found people sitting on the church steps or in their cars when I came out afterwards.”

Over the last year, Roy Kroezen—carillonneur of the Centralia Carillon in Illinois, as well as organist at St. Mary Catholic Church in Centralia and the Fox Theater in St. Louis—has played weekend carillon concerts in Centralia to an audience sitting in their cars in the church parking lot. “Since I’m usually alone while performing my job, I could continue, which made me grateful,” shares Kroezen. On July 25, Kroezen will treat Longwood guests to Ravel’s Mother Goose Suite and Gershwin’s Rhapsody in Blue, inspired in part by the Longwood setting. “Longwood is like a fairy tale,” says Kroezen. “It inspired me to play Mother Goose Suite, as the last part of it is called The Fairy Garden.”

Carillonneur of the Washington Memorial National Carillon and the previous bellmaster at historic Old Christ Church in Philadelphia, where he played for 21 years, Doug Gefvert returns to play the Longwood Carillon on August 22. During his performance, Gefvert will “start off with a showy, traditional piece, followed by Bach, Puccini, folk, and a fun American spiritual piece.” Gefvert marks his return to Longwood as an opportunity to be back in a unique, beautiful setting. “Being at Longwood where the people are there to enjoy beauty, the carillon fits right in,” he shares. “A lot of times, the carillon can be just background music. Longwood visitors, however, are in search of beauty and that’s what we can give them on the carillon.”

Lisa Lonie kicked off the summer carillon series with her May 23 performance “combined the familiar with the unfamiliar,” including Super Bowl halftime show songs by The Weeknd and Sting, music featured in TV commercials, the music of Billy Joel, and carillon compositions written by women. Known for her musical wit and creativity, Lonie is carillonneur at Princeton University; St. Thomas Church, Whitemarsh; and The Church of the Holy Trinity in Philadelphia (home to the oldest carillon in North America), and performs throughout the US, Canada, and Europe. Lonie shares that her goal is to “showcase and push the envelope on what can be played well and professionally on the carillon.”

Lonie returns to Longwood on September 12 for the final carillon concert of the summer. “When I’m playing,” shares Lonie, “guests can expect to hear music that will get their attention and give them a reason to pause and listen … my job is to musically reach down from the tower and metaphorically tap them on the shoulder, as if to say ‘hey, what do you think about what I’m saying?’ I feel it’s important for the carillonneur to reach down via the repertoire to encourage the listener to really listen.”

Join us for our summer carillon concerts, held on select Sunday afternoons from 2 to 2:30 pm. Guests are welcome to bring their own blankets and chairs and place them in the turf area across from the Chimes Tower to enjoy the concert.