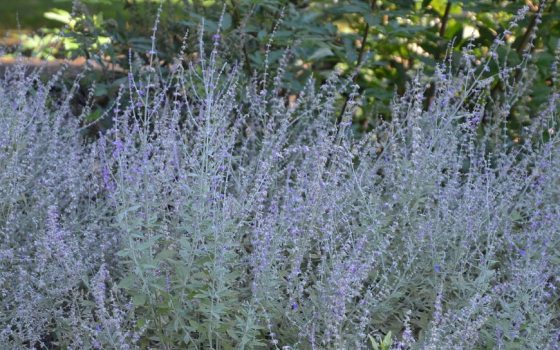 Name of the Botanical Game

If you happen to be in the garden and see the plant that you have always known as Russian sage (Perovskia atriplicifolia) labelled as Salvia yangii, then no, you are not seeing double … you have just encountered one of the latest botanical name changes at Longwood Gardens. This change, which has also been made at other gardens including Royal Botanic Gardens, Kew, reflects a recent revision of the whole genus of sages (Salvia), including rosemary (formerly known as Rosmarinus), Perovskia, and a few other less widely grown genera. While I’ve often heard gardeners jokingly remark that botanists like to change such names just to keep them guessing, botanical name changes such as these happen often and represent advances in science and our understanding of the relationships in the plant world. The goal with these changes is to balance the correct nomenclature with a need to communicate current information to our guests … so we don’t keep you guessing!

Here at Longwood, plant name changes are part of a dialogue that happens behind the scenes among the plant records, research, and horticulture staff. These types of revisions reflect the dynamic nature of plant taxonomy, recognizing that molecular research has greatly altered how we understand and interpret plant relationships. Eventually this research filters down and impacts how we name and label our large living collection, and eventually how these plants are sold and purchased commercially.

Along with Russian sage, we have changed the name for rosemary from Rosmarinus officinalis to Salvia rosmarinus. Normally in this situation the name would have been changed to Salvia officinalis. But because that Latin binomial already exists for the common garden sage, a new combination was needed, leading to Salvia rosmarinus. Similarly, Salvia atriplicifolia refers to another existing species, so the authors of an original study basing the name changes on molecular work chose Salvia yangii to commemorate Chang Y. Yang, a Chinese botanist who worked on this group of plants. Russian sage and rosemary have similar flower types to Salvia, which helped contribute to placing all of them in Salvia.

In the case of Salvia, given the new genetic information, botanists had three choices, as detailed by the Royal Horticultural Society:

Do nothing, which would not help with further study and use.

Continue to recognize rosemary as a genus, which would mean changing the names of more than 700 species of Salvia (many of which are popular garden plants).

Absorb rosemary Russian sage into Salvia. This third choice results in only 15 name changes—rosemary and Russian sage being the most well-known.

In other words, the original authors of the study explained that the approach of absorbing the 15 species into the genus Salvia was the “most stable, practical approach” when compared to the alternative of splitting Salvia into many new genera.

At Longwood, we constantly review how we name plants, with revisions happening on a regular basis. Changes to scientific plant names changes generally fall into a few broad categories that include:

Taxonomic: This is where molecular, anatomical, or other research shows new relationships among various plants. The Salvia changes described above are a good example of this category, but there are numerous other examples. With the current and rapid advances that are being made using molecular techniques to understand plant evolution and plant relationships, revisions to plant families, genera, and species are continually happening. A relatively recent change that we have accepted involves merging previously separate plant families. In this instance the horse-chestnut (Hippocastanaceae) and maple (Aceraceae) families have been subsumed by the soapberry family (Sapindaceae). And while these changes may not have any horticultural impact, they point to the latest approach to understanding systematics, or the organization of plant groups.

Nomenclatural: These are the situations where the identity and taxonomic standing of a plant has not changed, but its name has been altered for various historic reasons. For example, an unusual Chinese maple, Acer pectinatum ssp. maximowiczii, was previously called Acer maximowiczii but this new (and longer!) name more properly describes its position within all maples. To make life confusing the previously named Nikko maple (Acer nikoense), native to Japan and eastern China, is now called Acer maximowiczianum!

Re-identification: In these cases a plant was mis-identified when it arrived and one of the horticulture or research staff notices the difference. Sometimes this happens in plain sight in the Gardens but just as often occurs behind the scenes. Recently a plant in one of our back-of-house floriculture greenhouses had its name changed from Peperomia polybotrya to Pilea peperomioides. Both of these are relatively common houseplants, and look extremely similar in leaf, making them hard to distinguish. But they are in separate plant families, so their flowers are quite different. Thanks to Longwood Grower Kerry Zwack, who had seen this plant in flower, we could verify its identity. Most of the plants in these greenhouses eventually make their way to public display and we strive to make sure that everything is accurately identified and labeled for our guests. After all, our plant labels are among the most widespread and highly visible parts of our interpretation and education programs, and we want to ensure that we are providing the most accurate information possible.

In many situations we defer making certain name changes, based not only on an abundance of caution but also because we want to see if these changes are accepted by the wider botanical community before making the switch ourselves.

A recent example of such caution can be seen in the significant changes in how dogwoods (Cornus) are named, where the recent research points to splitting Cornus into separate genera, in contrast to the situation with Salvia. These changes include North American, European, and Asian species such as our beloved native flowering dogwood (Cornus florida), Japanese flowering dogwood (Cornus kousa), the pagoda and giant dogwoods (Cornus alternifolia and C. controversa), the cornelian-cherries (Cornus mas and C. officinalis), the shrubby dogwoods (for example, Cornus sericea and C. alba), and our native bunchberry (Cornus canadensis). If you really want to make your head spin, take a look at these taxonomic revisions:

Hopefully the next time that you read a plant label and see a familiar plant with an unfamiliar name, we’ve been able to shed some light on how and why this change might have happened … not to make life difficult, but rather to stay current, be accurate, and recognize the ever-evolving nature of plant taxonomy … and all the technicality and beauty that come with it.