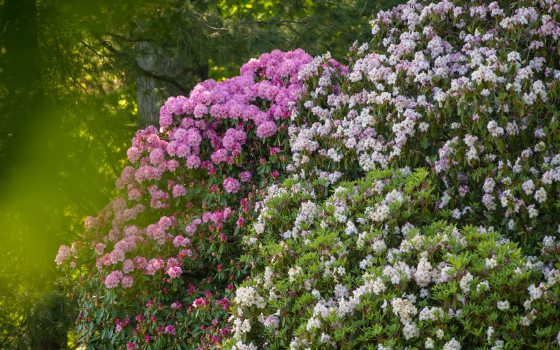 A New Take on an Old Favorite: Rhododendrons

Throughout temperate regions of the world, rhododendrons are among the most popular of hardy flowering shrubs—and have a strong presence here at Longwood. This vast genus of more than 1,000 species and thousands of hybrids is unmatched in the intensity, zeal, and diversity of its floral displays. Depending on the selection, a rhododendron’s floral parade can last from March until June and provide a texturally diverse foliar backdrop for the remainder of the year. When rhododendrons were gaining popularity in the early 20th century, many early rhododendron enthusiasts extolled the virtues of the mid-Atlantic United states, particularly that of greater Philadelphia and northern Delaware, as prime regions for growing rhododendrons, and the early history of rhododendron cultivation in the US is partially rooted in southeastern Pennsylvania, including Longwood Gardens itself. Throughout the last century, Longwood has made continual efforts to strategically build a beautiful and diverse collection of rhododendrons—and the dozens of newly donated plants soon making their way to Longwood represents a new milestone in our rhododendron collection. 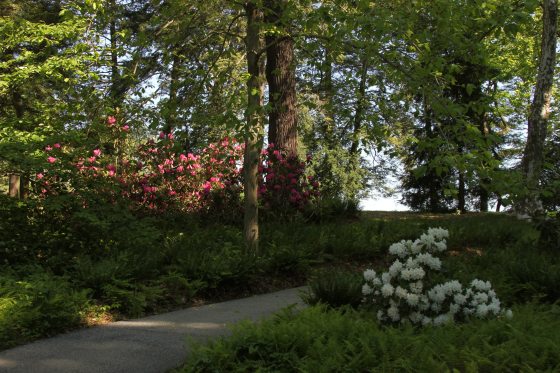 The history of rhododendrons at Longwood is an interesting one. Notably, Longwood founder Pierre S. du Pont chose a variety of rhododendrons, azaleas, and camellias as the core plantings of the East Conservatory when it opened in 1928. Our archives indicate that du Pont imported rhododendrons with great frequency. He focused on tender plants for conservatory use, many new and potentially hardy species, hybrids imported from the great rhododendron nurseries of the time on the Bagshot sands of Surrey, and even several dozen selections sourced from vaunted rhododendron expert and enthusiast Lionel de Rothschild. Records show that du Pont had a continued passion for rhododendrons, and his list of contacts for sourcing plants was a who’s who of early 20th century horticulture. In 1962, his passion for the genus was commemorated when a Southern Indian Hybrid azalea was named in his honor by the Longwood staff. 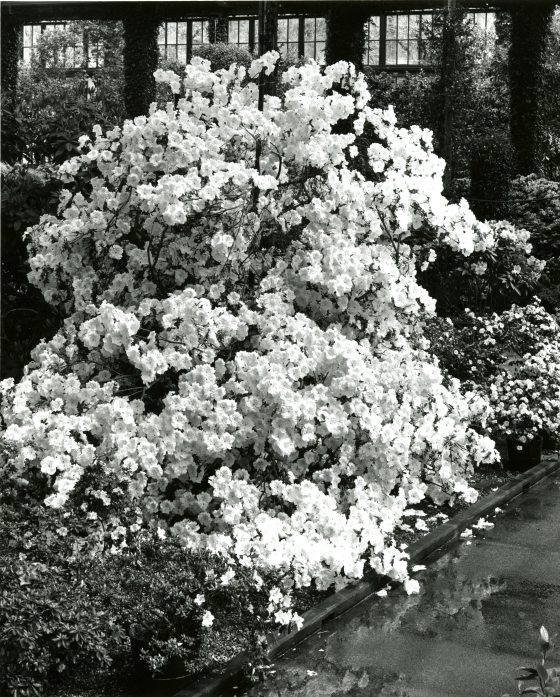 This black and white image from April 1959 shows Rhododendron ‘Pierre du Pont’, named for the founder in 1962. The flower color is described as “white with yellowish green spotting, fading greenish.” Photo by Gottlieb Hampfler. 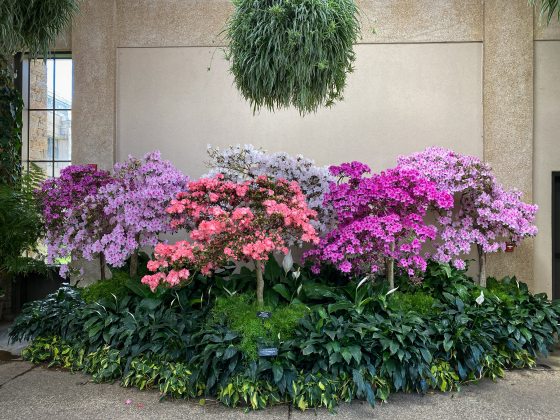 Belgian Indian azaleas were extremely popular during du Pont’s time and were one of the focal plant groups of the East Conservatory when it opened in 1928.  Since that time, the scope of plantings in the East Conservatory has changed, but a generous donation of these decades-old Belgian Indian azalea standards—pictured here in April 2021—rekindle that legacy. Photo by Carol Gross.

The early history of rhododendron cultivation in the US also has many other local connections, including Joe Gable, a farmer from Stewartstown, Pennsylvania who became a pioneering rhododendron breeder, famous for popularizing the genus and for his unusual cultivar names, which were often combinations of the names of the parents used to make the hybrid.

Beginning in the 1930s, Gable used seedlings grown from the famous plant explorer Joseph Rock, plants from other famous early breeder Charles O. Dexter, and pollen from the collector Edward J.P. Magor—a gardener and rhododendron collector from Cornwall—to create some of the best adapted rhododendrons for our region. By the time Dr. Russell Seibert became director of Longwood in 1955, some of Gable’s most noteworthy hybrids and cultivars were available for purchase and were selected and planted here at Longwood. Many of these, including ‘Caroline’, ‘County of York’, and ‘Atroflo’ can still be seen in our Gardens and they are still among the best rhododendrons for growing in our region, but now seldom encountered in nurseries.  The best place to see these rhododendrons at Longwood is in the Hillside Garden, around the Italian Water Garden, and the south side of Peirce’s Allée. 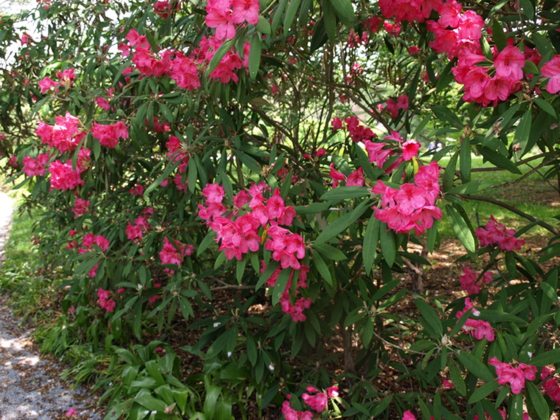 Recent interest in rhododendrons was spurred when members of Longwood’s horticulture team revisited the idea to develop “rhododendron rooms” in the garden spaces at the interface of Peirce’s Park and Peirce’s Woods. To build upon the legacy of rhododendron collections at Longwood, in late 2021 our horticulturists worked with local rhododendron expert Jim Gears to obtain and plant 66 new types of rhododendrons comprising 123 total new plants, encompassing a wide range of taxonomic and ornamental diversity to instantly enrich the garden spaces at the interface of Peirce’s Allee and Peirce’s Park.

The breadth of diversity in the developing collection will provide a wider range of flowering times outside the traditional mid-May period for more commonly grown rhododendrons, and a huge diversity of flower colors and foliage textures that showcase the staggering range of diversity for this genus hardy in our region. Featuring prominently among these plantings are many selections from Dexter, widely credited as the first American rhododendron breeder that created exceptionally durable plants for the mid-Atlantic climate and little-known species such as the ruggedly hardy, mid-April flowering Rhododendron adenopodum.

Efforts to expand this collection have continued through a generous donation of an incredible collection of cutting-edge rhododendron hybrids from Erchless, a Phipps estate in Old Westbury, New York, where rhododendrons have been an emphasis of the expansive gardens since the 1920s. Their legacy of rhododendron collection is matched by an extensive hybridization program that has resulted in several named cultivars and other selections under evaluation. To enrich the collections in the gardens, 75 plants were donated to Longwood that represent an array of flower and foliage types with particular emphasis on foliar diversity; hardy, yellow flowered rhododendrons; and difficult-to- obtain cultivars such as ‘Halfdan Lem’, a striking, red-flowered selection commemorating the Alaskan rhododendron breeding of the same name. Some of these new selections will be showcased as new plantings at the west end of Peirce’s Allee. 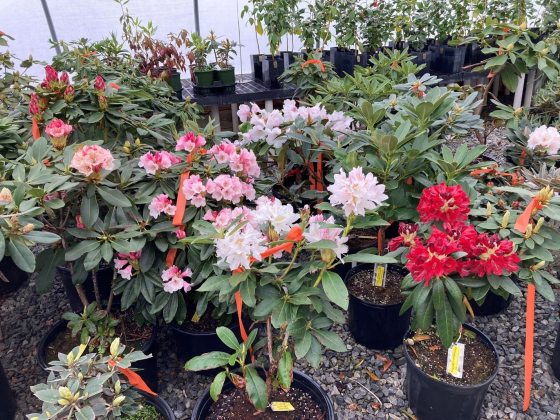 While some of the new plantings are ready to be viewed now, others will be installed gradually in the coming months. Rhododendrons are at their floral peak in late April through May, with a peak during the second and third weeks of May. These new rhododendron plantings represent a new milestone in the century-long development of rhododendron collections at Longwood. As these collections continue to grow in the coming years, we hope to foster continued interest in rhododendrons while continually elevating and refining the beauty of our Gardens for our guests.