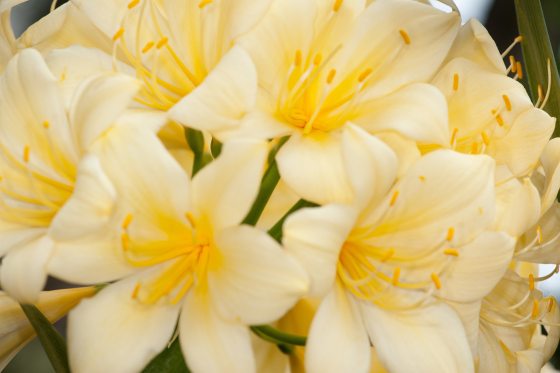 Longwood Gardens is releasing its second named clivia on March 17 when the North American Clivia Society holds its International Symposium and Show at Longwood Gardens.

‘Longwood Fireworks’ boasts a burst of yellow flowers above the foliage. The petals of the florets are reflexed and curve backward and form a round, full 9-inch umbel, creating an impressive floral display.  Clivia 'Longwood Fireworks' won multiple awards at Clivia shows in 2010 and 2011 as an unnamed seedling.

Longwood began its breeding program in 1976, when clivias were commonly orange. The yellow clivia existing at the time were rare but not impressive, so Longwood decided to initiate a breeding program to produce a superior yellow clivia.  One factor that slowed the program was the extended period of time that it takes for a clivia seedling to mature. Seedlings can take up to eight years to bloom from the time the seed is planted.

This is the second in a series of Longwood clivia cultivars expected to be released in the next five years. The first, ‘Longwood Debutante’ debuted in March 2011.

About Longwood Gardens
In 1906, industrialist Pierre du Pont (1870-1954) purchased a small farm near Kennett Square, PA, to save a collection of historic trees from being sold for lumber. Today, Longwood Gardens is one of the world’s great horticultural displays, encompassing 1,100 acres of dazzling gardens, woodlands, meadows, fountains, 10,010-pipe Aeolian organ and grand conservatory. Longwood continues the mission set forth by Mr. du Pont to inspire people through excellence in garden design, horticulture, education and the performing arts, through programming that includes exhibitions, musical performances by leading artists, renowned horticulture education programs, horticulture research, environmental stewardship and community engagement. Open daily, Longwood is one of more than 30 gardens in the Philadelphia region known as America’s Garden Capital. For more information, visit longwoodgardens.org.