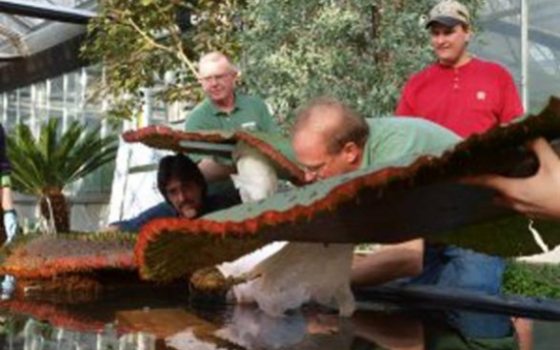 This year the Philadelphia International Flower Show produced by The Pennsylvania Horticultural Society (PHS), America's first horticultural institution, will showcase plants from around the world in the 2010 show “Passport to the World.” A special exhibit called the "Explorer's Garden" will greet guests, and will capture the spirit and adventure of early plant exploration. For the "Explorer’s Garden," Longwood is forcing its signature Victoria ‘Longwood Hybrid’ water-platters. Longwood developed Victoria ‘Longwood Hybrid’ in 1961 by crossing Victoria cruziana and Victoria amazonica from seeds collected from plant exploration trips to South America. Over the years Longwood has embarked on more than 50 exploration trips to every continent except Antarctica.

This is the first time that Longwood Gardens will be growing plants for the Flower Show, and the Victoria platters are a favorite of Longwood's guests! We are excited to share this amazing plant with the Flower Show's 250,000 visitors. If you have visited Longwood during the summer months, you know that these plants are one of the biggest attractions in our water garden display.

Once the excitement of being invited to participate in this year’s flower show subsided, the real fun began. We sowed the seeds for the plants in late November to give us as much growing time as possible before the opening of the show at the end of February.

Within two weeks the seed germinated and the race was on! When we began, we were hoping to have 3-foot wide leaves for the show. We added lights to supplement the short days of winter, and heated the water to 80 degrees Fahrenheit using submersible aquarium heaters combined with small pumps to help circulate the water. Unsure exactly how the seedling would respond, we started with 18-20 hours of supplemental light. Within 10 days the tiny seedlings had grown to nearly 12 inches in diameter. We quickly realized that is was not only possible to have 3-foot leaves for the show, but is was likely that these impressive plants would reach 4-feet+ in diameter. We had to make plans for a temporary tank to be built in our Production Greenhouse. What a luxury to have a staff of craftsman on the property that could help us along the way! Once the tank was built we added a liner, supplemental lights and heat. The new tank measured 10 feet x 10 feet, giving us room to grow two plants.

Since the leaves were growing so quickly, we turned our attention to the next challenge at hand: how to move plants with 4-foot leaves into their new tank. We had to stabilize the leaves so that the thorns on the underside did not damage themselves or other leaves. Once again our carpenters came to rescue. After several discussions we decided on a structure what could best be described as "sedan chair," similar to a chair that would be used to carry nobility. How fitting since the plant is named in honor of Queen Victoria! The leaves were sandwiched in a bed of wet sphagnum to help keep the plant hydrated, and finally wrapped in a layer of plastic before being sealed for the move.

Once the plants reached their new location, we removed the sphagnum from the leaves and lifted the pot from its "bed." Each leaf was supported by a gardener, who carefully watched that the thorns and petioles didn't inflict injury. Now in their new home, the Victoria Water-platters are growing happily and waiting for their chance at stardom at this year’s Philly Flower show.

Guests to the "Explorer’s Garden" will also see New Guinea impatiens, now a staple in home gardens around the country, but first brought back to the US after a Longwood-sponsored trip to New Guinea in 1970. Other notable plants include the Meconopsis or blue-poppy.  This startling blue beauty requires the cool climate of the Himalayas, Scotland or Alaska to flower, but Longwood growers have successfully forced Meconopsis for display in the Conservatory each March since 2002. Longwood is also contributing Echium candicans ‘Select Blue’, a perennial with a bright blue spike and Echium wildpretii that can produce flower spikes up to five feet tall. Finally, Longwood is also growing a selection of large specimen poinsettias, paying homage to the popular holiday flower that was on display at the very first Philadelphia Flower Show. See you at the show!