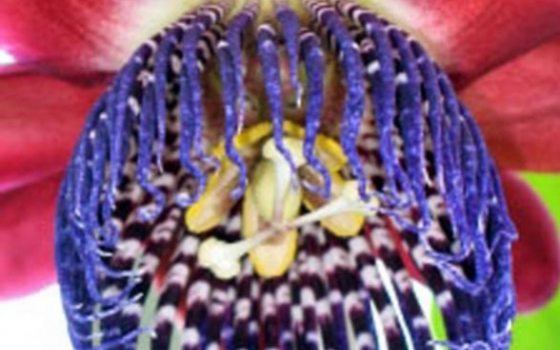 The past year has been an olfactory adventure in Longwood's research greenhouses. In preparation for Making Scents: the Art and Passion of Fragrance, we brought in a variety of fragrant plants for trial. Some plants, such as roses, are common and easy to obtain. Fragrant varieties such as Rosa ‘Secret’s out’, R. ‘Gros Choux d’Hollande, R. ‘De Resht’, R x centifolia, R. ‘Compte Chambord’, and ‘Jaques Cartier’ will be making an appearance in the Conservatory during the exhibition.

Other fragrant plant requests are more exotic and elusive. Everyone has heard of frankincense and myrrh, but very few people grow them. I know how rare they are, because I was given the task of locating and purchasing these plants. Alas, I did not have the aid of three wise men to guide me, so I was left to my own devices. Fortunately, I had the help of fragrance expert Art Tucker, many horticulture interns, and the Internet. Surprisingly, frankincense can be found at a nursery in New Jersey. Myrrh came from a nursery in the the Southwestern United States. Both plants exude a sap when the bark is wounded that hardens into a gum. The gum is used to produce the fragrances of frankincense and myrrh.

One of the most surprising and delightful fragrant plants was already in Longwood's plant collection. Senna didymobotrya or “Popcorn Senna” emits the pleasant aroma of hot buttered popcorn when the leaves are gently brushed. I always enjoy watching the faces of people who are not familiar with the plant when they get the first whiff of hot buttered popcorn. This plant should be planted near movie theaters! Golden yellow flowers grace this plant, which increase its ornamental value.

Another quirky, fragrant plant has been kicking around Longwood's greenhouses since 1957. Paramongaia weberbaueri was collected on the slopes of the Andes in Peru. It looks like a giant daffodil, blooms in the fall and has an amazing fragrance. In fact, my first indication that Paramongaia was in bloom was the sweet fragrance that filled the greenhouse. I looked around to see where the scent was coming from and was amazed to see a daffodil-like flower blooming in the fall!

Aloysia virgata, or sweet almond bush, has been a workhorse in our greenhouses. It produces spikes of fragrant white flowers all year long that resemble Buddleja flowers. The sweet, nutty aroma fills the research greenhouses, and sometimes even permeates into the hallways of the head house. While visiting the Harry P. Leu Gardens in Orlando, I caught the sweet scent of almonds on the wind nearly 200 feet from the tree-like Aloysia virgata that was growing in one of the beds.

Speaking of Buddleja, there are two pleasantly fragrant varieties slated for display in the Gardens this year. Buddleja asiatica is a species that blooms in January, with white flowers and a pleasant fragrance. We trialed this plant in our Research Department a few years ago in hopes of finding another winter-blooming Buddleja to supplement the other Buddleja species that we use from Mr. du Pont’s time. ‘Winter Waterfall’ is a newcomer that will be making its Conservatory debut this year. It resulted from a cross with Buddleja asiatica. It has a slightly different fragrance than B. asiatica and white pendulous flowers, and it blooms in November and December, which makes it a perfect addition to the Christmas display.

The award for the most exotic fragrant flower goes to Passiflora 'Ruby Glow'. Not only did this plant have the best fragrance out of all the Passiflora trialed, it also had the best foliage. The fragrance is tangy and floral. The flower is a sight to behold. It resembles some strange sea creature with tentacles.

I have to say that not all of the plants cooperated. Cestrum nocturnum produces an amazing vanilla fragrance that smells heavenly. Unfortunately, it is only fragrant in the early hours of the morning when the garden is empty, and most folks are sleeping. On cool mornings when the greenhouse vents are locked down, the sweet vanilla scent is trapped in the greenhouse, and I can’t help but smiling when that sweet smell surrounds me.

Some smells are downright unpleasant. Caryopteris divaricata 'Maxim' smells like bad onion soup when the leaves are brushed. Plectranthus neochilus is also known as the skunk plant, and you can smell why. The scent of it lingered in the headhouse for an entire day after I transported the plant through the area, causing several people to comment. While pruning a lemon-scented Eucalyptus, I became nauseous. For a few minutes I was convinced that I was coming down with stomach flu, and needed to go home. Thankfully, the feeling passed, and I realized that my discomfort was coming from the smell of the Eucalyptus. Yuck! I try not to get too close to that plant.

Trialing fragrant plants was extremely interesting. The first question I got whenever someone new entered the greenhouse was "What is that smell?" Since we were surrounded by so many fragrant plants, it was an adventure to find exactly where the scent was coming from. I hope you also have a great adventure when you come to see these plants in the Conservatory for Making Scents: the Art and Passion of Fragrance, which opens April 10.