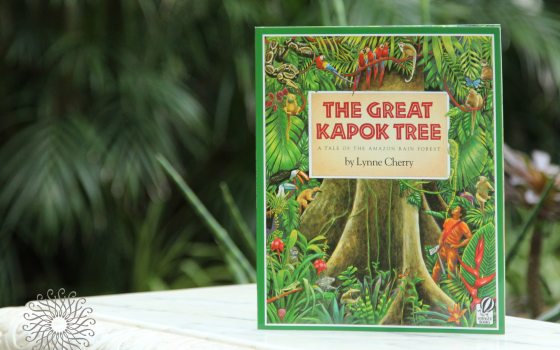 During our second annual Community Read, Longwood invites young readers and their families to share the secrets of The Great Kapok Tree with author-illustrator Lynne Cherry. First published twenty-five years ago, the book has been translated into many languages and has sold over a million copies. Lynne feels this particular story touches something deep, because each of us—no matter our age—can relate to a place we love that could be destroyed.

Through her work, Lynne combines her love of art and her reverence for nature to answer the question she long ago put to herself: "What needs to be done in the world where I can have the most effect?"

To Lynne, nothing is more important than saving the environment—addressing climate change, reducing use of fossil fuels, and promoting renewable energy. And so her books and illustrations not only inspire us with awe, they inspire us to take action. The Great Kapok Tree stirs our curiosity about the community of creatures in our own backyards, how we're connected, and why it's important.

During author visits, Lynne often shows slides of drawings she did as a child and then later redrew as an adult, to show kids that what they do matters. Her belief in self-efficacy—the ability to make a difference in one's own life—is the taproot that grounds her work, a force that refuses to be felled.

The power of this belief is made visible through Lynne’s latest creative endeavor. As director of Young Voices on Climate Change (YVCC), she teaches kids that their voices can change the world as surely as the whispers of the animals that saved the kapok tree. To this effect, Lynne has produced a series of short films called Young Voices for the Planet (YVFP), which share youthful success stories of actions taken on behalf of Planet Earth. In each of these films, the voices of children breathe new life into the story and spirit of The Great Kapok Tree.

Lynne admits that the transition from books to film wasn’t easy. She had never directed before, but got lots of help and pointers along the way. Production began in 2008-2009, and at first she was told the movies weren't very good. But her belief in the project—in the power of young role models to inspire peers to action—kept her going. Now she reports that "the films pack an emotional punch: they often bring adults to tears, but they empower youth."

Far from the gloom and doom messaging that often stops us in our tracks, the images of kids acting with meaning and passion will make you want to plant a tree, carry reusable bags, and save energy. In 2014, YVFP released its tenth film, We Sing Out!, which features folk legend Pete Seeger and the Rivertown Kids "singing out about . . . a vision of a renewable-energy-powered world."

Currently Lynne is fund-raising to prepare the films for national broadcast, in order “to reach the millions of viewers necessary to accomplish the kind of social and political change that they have the power to inspire.” When it comes to caring for the Earth, we all need to sing along!

Just as the rain forest animals whisper to the woodcutter in the story of The Great Kapok Tree, our own relationship with the places we love starts by listening. Listen to the plants and animals around you. Listen to the bee who buzzes in the sleeping man’s ear. Its voice is the spirit of the kapok tree, and it is also the spirit of our Community Read: “All living things depend on one another.”

So please join us when Lynne Cherry visits Longwood Gardens on March 7, to celebrate our Family Community Read Day and the 25th anniversary of The Great Kapok Tree. Also discover our whole range of programs for children, including Summer Camps, Scout Programs, Home School Days, K–8, Family Story Time, and more. And wake to the wonders of our world!