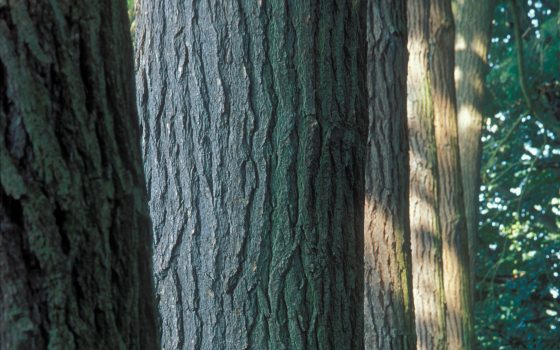 The Lore of Our Trees

For all of humankind’s existence we have relied on trees for food, medicine, and shelter. Trees are some of the largest and longest lived organisms on earth. So it is no surprise that ancient civilizations attributed great meaning to trees. Longwood Gardens’ own foundation is centered on Peirce’s Arboretum, a historic collection of trees started in the 1800s on the land that was to become the Gardens. Our founder, Pierre S. du Pont, understood the great value of trees and purchased the property to save the arboretum from destruction. Watching trees grow that I’ve planted fills me with joy; knowing the lore of these trees adds a new layer of meaning that connects me with distant times and diverse cultures. I’d like to share some of my favorite stories of tree lore and invite you to take another look at the relationships we all share with the living world around us.

According to the creation stories of the Algonquin Nation, the first humans emerged from the bark of an ash tree shot by the arrows of the mythical hero Glooskap. Similarly in Norse mythology, man and woman were created by the gods from an ash tree and an elm tree. Ash wood is both strong and resilient, making it ideal for tool handles and baseball bats. In classic mythology Cupid’s arrows were made of ash wood, which may explain why ash is used as a love charm in some folklore. One such charm is that if a girl places an ash leaf in her left shoe and recites the following rhyme, she will learn the name of her future husband:

Even, even, ash
I pluck thee off the tree.
The first young man that I do meet,
My lover he shall be.

I cannot think of the ash tree without some sadness. In anticipation of the devastating effects of the emerald ash borer approaching our area from the west, I haven’t planted a new ash tree in the last 10 years. It is not possible, nor is it ecologically responsible, to protect all our ash trees from the emerald ash borer; however, Longwood has selected 18 significant ashes to preventively treat. To me, these are our sacred ash trees.

The mighty oak—for its size, strength, and longevity—is a symbol of the strength and power associated with Zeus, the head of the Greek pantheon. Priests of Zeus would listen to the rustling leaves of the sacred oak trees and interpret their meanings as the words of the god. Sacred groves of trees in the Greco-Roman and Celtic cultures were strongly associated with druidic practice. The word “Druid” is thought to be derived from a proto-Celtic word meaning "oak-knower." The oak was also associated with Thor, the Norse god of thunder and lightning. For this reason, placing an acorn on a window sill was believed to protect a home from lightning. In fact, oak trees are more likely to be struck by lightning than other trees, not only because of their height, but because their wood has low resistance to electricity.

To me the oak signifies an investment in the future. Oaks grow slow and strong. If you plant an oak tree today, you will not live to see it reach full maturity—however, you are providing a valuable food source for many generations of wildlife, and pleasant shade for generations to come.

Even in the depths of winter, the holly’s evergreen leaves shine. In Celtic tradition, the Oak King and Holly King are forever struggling for power. When the oak loses its leaves, the evergreen Holly King rules the waning year, till the winter solstice when the Oak King wrests control. Holly was the sacred plant of the Roman god of agriculture, Saturn. During his yearly celebration of Saturnalia at the winter solstice, holly greens were made into wreaths to decorate images of the god. To avoid persecution, early Christians also decorated with holly and the plant came to be a symbol of Christmas. The prickly leaves symbolize the crown of thorns; its red fruit, the blood of Christ. Its very name “holly” is thought to be a derivation of the word “holy.”

Holly was seen to be strongly protective, and to cut down a holly tree was very bad luck. Throughout Europe, English holly trees (Ilex aquifolium) were planted near homes to repel poison and protect from lightning and witchcraft. The lightning association probably comes from the jagged lines of the leaves, which resemble a bolt of lightning. Witches were believed to travel on their broomsticks along the top of hedgerows, and the holly’s prickly leaves would deter them. In Japanese folk tradition, hanging a Japanese holly (Ilex crenata) sprig on the door of your house will keep away devils. Native Americans associated the holly with courage and defense, often placing sprigs of the American holly (Ilex opaca) on their war shields. The wood of the holly was believed to be especially good for controlling horses and was often used in the handles of whips. Supposedly, a garland of holly placed around a horse’s neck prevents the horse from having nightmares. I didn’t even know that horses could have nightmares!

The sweet smelling linden tree with its heart-shaped leaves is associated with Freya, the Germanic Goddess of truth and love. It was believed that you could not tell a lie under the linden tree. Large linden trees were places of social gathering and weddings, as well as places to assemble to create laws and render judicial verdicts. In a Greek myth, the gods Zeus and Hermes disguise themselves as peasants and go door-to-door seeking food and shelter, but are turned away by all save an elderly couple, Baucis and Philemon. As a reward for the couple’s hospitality, the gods transformed them upon their deaths into an intertwining oak and linden tree.

The wood of the linden tree has fine acoustic properties and is used in many instruments, from the electric guitar to recorders and percussion instruments. I think of the linden as a musical tree, not only for the uses of its wood, but also because when it blooms in the summer it's abuzz with the music of bees. The linden is an excellent tree for supporting bee populations, and linden honey is considered exceptionally flavorful. As a lover of plants and science, when I see a linden tree, I am reminded of Carl Linnaeus, the famous Swedish botanist and father of modern taxonomy (the standardized method by which we name all living organisms). Carl Linnaeus must have greatly admired the linden tree, because he adopted the Latin derivation of linden as his surname.