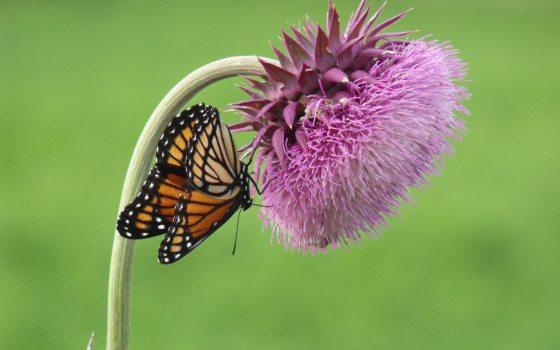 Like many gardens throughout our region, Longwood has been doing its part to help the monarch butterfly. A wonderful byproduct of these efforts is that many other native butterflies also benefit. In fact, Longwood's Meadow Garden is home to dozens of different butterfly species, with more being identified each year as the landscape matures. While many of these butterflies are important pollinators like the monarch, others will ignore flowers almost entirely, and are drawn to the Meadow Garden for other reasons. Indeed, in order to enjoy these beautiful insects, we need to manage their habitat in ways that benefit all of their different life stages—larva (caterpillars), pupa (chrysalises), and adults (butterflies).

Flowers alone are not enough to make Longwood a butterfly paradise, as many caterpillars will only feed on the leaves of certain plants. The monarch butterfly's dependence on milkweed is perhaps the best example of this phenomenon. With this in mind, we plant many caterpillar food plants in the Meadow specifically to benefit both the species that we do have (such as the hackberry emperor, which is dependent on hackberry trees) and species that we are hoping to attract (such as the Baltimore checkerspot, which is dependent on white turtle-head).

So, as you explore the Meadow Garden this summer, be on the lookout for the many different species of butterflies that call that garden home. Here are some of my personal favorites to watch for.

On the first warm days in March, you may spy what looks like fallen leaves moving gently against the breeze. However, appearances can be deceiving! These well-camouflaged butterflies are one of the first harbingers of spring, but can also be found during the summer months in the Forest Walk and around the Meadow's Forest Edge. Mourning cloaks have one of the longest lifespans of any butterfly at nearly a year, and will actually overwinter as adults by hiding inside hollow trees and loose bark. Whenever the weather warms up, they venture outside of their refuges to feed on sap, animal droppings, and whatever else they can find. In areas where maple syrup harvesting takes place, these butterflies will even congregate around leaking taps to lap up any spilled maple sap.

Mourning cloak butterflies can be found nearly everywhere south of the Canadian tundra in North America, and are also native to parts of Europe. In the United Kingdom, they are known as the Camberwell beauty. In Pennsylvania, their caterpillars will feed voraciously on a wide variety of native and introduced plants, and can become occasional pests of ornamental trees and orchards.

While this butterfly is a common sight throughout much of eastern North America, most gardeners are probably more familiar with its infamous green-and-black striped caterpillars, which are voracious eaters of dill, fennel, parsley, and other plants of the carrot family. When threatened, black swallowtail caterpillars have an ingenious defense: they will stick out a forked, foul-smelling inflatable "tongue" (or osmeterium) that makes them look more like a snake. Young caterpillars that are too small to manage this convincing display rely on camouflage instead, resembling bird droppings.

Interestingly, this butterfly was once an uncommon sight in our area, and is one of the few native insects to have dramatically benefited from the spread of introduced plant species. Before European settlement of the Americas, black swallowtails in Pennsylvania fed predominantly on golden Alexanders (Zizea aurea)—a relatively uncommon native wildflower. However, due to the introduction and spread of Queen Anne's lace (Daucus carota), the black swallowtail butterfly now enjoys a much more varied diet.

Black swallowtail butterflies can be found throughout the Meadow Garden during the summer, thanks in part to the large numbers of golden Alexanders that we have planted exclusively for their benefit around Hourglass Lake Pavilion and the Meadow Garden entrance. However, as male black swallowtails are extremely territorial and prefer to defend areas of high elevation in order to increase their visibility to interested females (a behavior called "hilltopping"), they are especially common around the Webb Farmhouse and Hawk Point.

A note to fellow gardeners and vegetable growers: if these caterpillars are devouring your dill, parsley, or fennel, there is no need to panic! Simply relocate the caterpillars to some nearby Queen Anne's lace, which they will happily devour instead.

If you thought this was a monarch butterfly, you're not alone! The viceroy butterfly is a master of mimicry, and for good reason. While the milkweed-eating monarch is highly poisonous and foul tasting, the willow-eating viceroy is merely unpalatable. In fact, in regions where the monarch butterfly is not locally abundant, the adult viceroy will actually mimic other milkweed eating butterflies like the soldier and the queen. And as if this wasn't enough, viceroy caterpillars and chrysalises will even mimic bird droppings to avoid being eaten!

If you think that you have what it takes to see through this butterfly's disguise, they can be found in the Meadow Garden throughout the summer feeding on wildflowers in the company of monarchs—and can best be distinguished by their smaller size and an extra black stripe on their hind wings.

Our most widely-recognized skipper (a distinctive branch of the butterfly family), these charismatic insects are often seen zipping around the Meadow Garden at high speed as they forage for nectar from a wide variety of flowers. Oddly enough, the adults are almost never seen feeding on yellow colored flowers, and are particularly fond of pink and purple flowers such as wild bergamot (Monarda fistulosa), blazing-star (Liatris spicata), and various thistles (Cirsium species). Like other skippers, they keep their wings folded backward when at rest, and possess backward-curving "crochet hook" antennae. While many species of skippers look almost exactly alike even when they are standing still (which they rarely are), the silver-spotted skipper can always be identified by its prominent silver and orange eyespots, which serve to distract would-be predators.

The monarch gets all the credit for its long distance travels, but other butterflies migrate as well. Like the monarch, common buckeyes come to us from the south in the late spring, as adults of the first generation fly north to colonize the northeastern United States and southern Canada. While common buckeyes can be found in the Meadow all summer, they become extremely abundant during the fall as the northern populations once again pass through Pennsylvania on their journey south. Common buckeyes will feed on a wide variety of native and introduced plant species, and can also be seen drawing water and nutrients from mud (a behavior known as "puddling"). They are perhaps best recognized by their striking display of eyespots, which serve to startle birds and other predators.

A brush-footed butterfly, the great spangled fritillary feeds on a wide variety of nectar-rich flowers, including butterfly-weed (Asclepias tuberosa), wild bergamot (Monarda fistulosa), and various native thistles (Cirsium species). Its caterpillars subsist entirely on violets (Viola species), which proliferate following periods of disturbance—such as prescribed fire—that maintain their meadow habitat. Like other brush-footed butterflies, the front two legs of the great spangled fritillary are highly modified, and may allow them to "taste" things that they land on.

This butterfly is also unusual in that it overwinters as a caterpillar rather than a chrysalis. After hatching, these tiny caterpillars will often find refuge in stands of native "clump-forming" grasses such as little bluestem (Schizachyrium scoparium) and switch grass (Panicum virgatum). These dense grasses—which stay upright all winter long—serve as a perfect spot for overwintering fritillary caterpillars to ride out the cold weather before venturing out to feed on the first sprouting violets of spring.

While there are several other species of fritillaries in the Meadow Garden (including the meadow fritillary, the aphrodite fritillary, and the variegated fritillary) that employ this strategy, the great spangled fritillary is the largest by far, and can best be distinguished by its size and the striking, metallic-silver spots on the underside of its wings.

One of our largest and most conspicuous butterflies, tiger swallowtails can be found gliding gracefully throughout the Meadow Garden in search of nectar during the spring, summer, and fall. The conspicuous "tails" on the ends of their wings serve as an ingenious defense against birds, who are thought to mistake them for antennae and will subsequently attack the rear of the butterfly instead of the head. While many tiger swallowtails in the Meadow Garden bear the scars of these bird attacks, the damage is purely superficial, and does not appear to hinder the flight of the butterfly.

Tiger swallowtails are generalists, and their caterpillars will feed happily on a wide variety of native and introduced plant species in the Meadow. The adults, in turn, will eat nearly anything sugary, be it wildflower nectar, rotten fruit, or spilled soft drinks. Indeed, the remarkable ability of the tiger swallowtail to adapt to nearly any habitat has allowed them to thrive in natural areas, farms, and cities across our region.

In fact, tiger swallowtails are even more common than most people realize due to the fact that not all of them are yellow! Some—but not all—female tiger swallowtails can come in a black form, as seen in the picture below. However, closer inspection will reveal that its distinctive "tiger stripes" are still visible!

We  invite you to visit the Meadow Garden to witness the beautiful diversity of butterflies. This year—2016—seems to be a boom year and I am so excited to see our efforts in stewarding this ecological landscape pay off.

To learn about migrating monarchs and the native plants that support them, join us for Meet Us in the Meadow on September 24, 2016 from 1:00–5:00 pm.