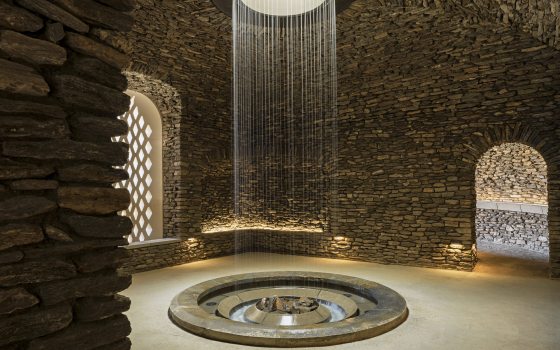 Grottos are natural or artificial caves used since antiquity as spaces of devotion or retreat in the landscape. From the caves of Homer’s Odyssey and Ovid’s Metamorphoses, to the rock-cut grottos of Hellenistic Rhodes and spring-fed crypts of Apollo’s oracle at Delphi, the tradition of grottos is founded at the intersection of history and myth.

When a young man fell through a cleft in the Esquiline hillside in Rome at the end of the fifteenth century, he found himself in a grotto-like cave filled with classical paintings. This chance discovery of Emperor Nero’s Domus Aurea—a vast palace buried for over a thousand years—electrified the emerging Renaissance and profoundly influenced Western art. The re-emergence of classical architecture in Italy and France during the sixteenth century stimulated an appreciation of order in landscape and the creation of magnificent gardens. The construction of garden grottos became popular, not only as places to escape the Mediterranean sun, but also as bath houses, theatres, and chapels.

Many of the historic gardens Longwood’s founder Pierre S. du Pont visited during his European travels contain grottos. In the gardens of Villa Lante, Vaux le Vicomte, Villa d’Este, and Versailles, grottos echo ancient Greek and Roman culture, combining imaginative design with innovative hydraulics to create sublime spaces of strange, numinous beauty. The great water gardens of Europe provided inspiration for Pierre’s designs at Longwood, the most ambitious of which is the Main Fountain Garden.

As part of the recent restoration of Longwood’s Main Fountain Garden, excavations for the new Pump Room behind the historic Loggia provided an intriguing opportunity to introduce a new garden element. The Loggia is the axial focus of the garden, providing a point of orientation and drawing visitors through the garden. The discovery of a grotto concealed behind the Loggia adds a layer of surprise and delight, transporting visitors out of the garden for a few moments to enjoy an ethereal world of peaceful contemplation.

The design of the Longwood Grotto draws on the historic grottos that Mr. du Pont visited in Europe. The square, tripartite plan and shallow dome are classical motifs that reflect the Italianate style of the Loggia and wider garden. However, the classical language is disrupted by the rugged, rubble stone of the walls and dome inside the Grotto. The stone was sourced from the D’Amico quarry just a few miles from Longwood and selected because of its rough texture and mica inclusions. The south wall of the Grotto appears to have collapsed, apparently revealing the natural rock face of a cave. Creating the illusion of the natural through playful artifice, it is as if the Grotto has always been there.

The Longwood Grotto is a masterclass of skill in stone craft. Constructed by Gary Odle at Stonescapes Inc. in nearby Hockessin, DE, the rubble stone vaults and dome were built on top of a complex wooden formwork fabricated by hand to precise geometry. Before the formwork was removed, a reinforced concrete shell was cast on top of the stones to lock them into position. At the tunnel and oculus openings, the stones are beautifully fanned to achieve the curved geometries. The massive stones of the natural rock wall were carefully winched into place and meticulously fitted together. The traditional masonry techniques employed to build the Grotto are as ancient as grottos themselves.

Drawn by the sound of water, visitors discover the new archways flanking the Loggia and descend through an increasingly rustic tunnel into the Grotto chamber. Cool, quiet and softly lit, the Grotto provides a moment of pause and reflection, animated by falling water and the sparkle of mica in the rough stone walls. Light glances the natural rock face along the south wall, which is colonized by ferns and mosses. An artesian swell of water rises in the central pool, into which a cylindrical curtain of droplets perpetually falls.