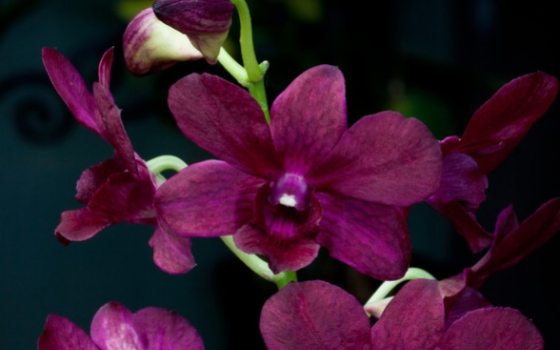 Orchids are an incredibly unique and fascinating group of plants. Many people can identify a Phalaenopsis (moth orchid) or Cattleya (the old corsage orchids), but the question often is asked, “What makes an orchid an orchid?” Orchids have some morphological (physical) traits that make them stand out from other plant families. In orchids, many of their floral parts come in groups of three. There are three sepals, which are the outer petals; these are what you see when you look at an unopened bud. There are also three petals, but in orchids one of the petals has been specialized into a labellum, or lip. This is usually the bottommost petal, and it helps to attract the pollinator to the reproductive organ. In orchids the reproductive organ, known as the column, combines both the male and female parts in one structure.

The orchid plant is also unique in its morphology (form or structure). We can begin with the leaves and work our way down to the roots. The leaves of many orchids in cultivation are unique in that they are specifically designed for water conservation (as is true for almost every orchid structure). They have a heavy waxy leaf coating and specialized stomata (openings through which the leaf “breathes”) that help to prevent water loss during transpiration (the act of the plant “breathing”). Many orchids utilize CAM photosynthesis as well, which in essence means that the plants collect materials during the day and then process them at night.

Orchid stems are also specialized into what are called pseudobulbs. These are basically expanded stems that allow the plant to store excess water and food. The roots of epiphytic (tree-dwelling) orchids have a special outer layer of dead cells called velamen. Because orchids metabolize slowly in order to not outpace their resources, the roots also absorb slowly, meaning that they need help catching water as it passes by. The velamen cells catch and fill with water as it passes by so that the true root (the core of the root structure) has ample time to access as much water as it can. Velamen is silver-white in color, but becomes transparent when wet, so that when the root is wet it turns green as you are able to see through to the inner structures of the root that contain chlorophyll.

The most common orchid genera are Phalaenopsis, Cattleya, Oncidium, Dendrobium, Vanda, and Cymbidium. Although these plants are all in the orchid family, they vary greatly in their physical and floral morphology.

Phalaenopsis are the most common orchids in the marketplace and are commonly known as “moth orchids.” They usually have wide, flat, dark leaves that are arranged opposite each other. They carry long tall stems of wide flat flowers that can last up to three or more months. Their lip is smaller than the petals and held horizontally under the column.

Cattleya was once the king of the orchid world, and was known in the past for its use in corsages. Cattleya are generally large (up to 8 inches across), have ruffled edges, and are fragrant. They have thin pseudobulbs and hard, waxy leaves. They usually have large lips with a contrasting color in the center under the column.

Oncidium, perhaps more accurately the oncidium alliance, are a group of plants from South America that span a wide range of habitats. Inside the oncidium alliance there are a number of genera that hybridize freely to create what we call intergeneric oncidium hybrids. These can come in all sorts of shapes and sizes but are generally characterized by large quantities of small to medium flowers borne on a branched stem that generally forms a Christmas-tree shape. The most commonly identified Oncidium are the yellow “dancing lady” type.

The den-phal type are warm growing year round and do, just by happenstance, bear flowers similar in appearance to the genus Phalaenopsis. They can be distinguished by plant habit (most Dendrobium have pseudobulbs that resemble tall canes) and flower shape. Den-phals have a spur at the back of the lip; some are more pronounced, others less. They are also borne on very strong upright to barely arching stems. Interesting to note, den-phals can rebloom on old canes.

The second type, the nobile Dendrobium, grow warm in the summer but require a cool winter period to induce flowering. They need to experience temperatures in the 40s to low 50s (preferably) in order to flower well. They are distinguished by bearing fuzzy, flat, round, colorful flowers close to stem, which cover most of the stem on a well-flowered plant.

Vanda are a genus of hot growing orchids mainly from Southeast Asia. They have strap leaves which are thick and leathery, and are generally grown in hanging baskets without any media. The flowers are large, circular, and very full in shape. They come in a variety of colors, from red to blue, and are vibrant and showy.

Cymbidium carry tall stems with many flowers that have a more typical orchid shape. They are easily identified by their grassy leaves, and they readily form large clumps. Most common are the cool-flowering types, which need to experience a cooler winter (nights in the 40s for some time in the fall) in order to initiate flowering. Once the flowers open, they can last for up to two months or more, especially in a cool environment. These are very showy and rewarding plants, and a plant in a six-inch pot can carry three stems with 15 or more flowers each, depending on the type.

The orchid family is an incredibly large and diverse plant family, with more than 25,000 different species and more than 150,000 registered hybrids. The variation within a single species can be significant, let alone across the entire family. But with a little practice, knowledge, and observation, almost anyone can identify the most common types of orchids. Identifying one orchid from the next will be helpful in understanding what conditions they prefer and how to grow and flower them well. Happy growing!