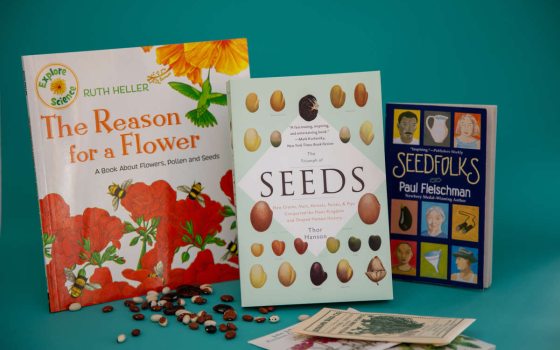 Experience the Strange World of Seeds

Dig into this year’s Community Read books, and you’ll unearth things you never knew about seeds. In Thor Hanson’s The Triumph of Seeds: How Grains, Nuts, Kernels, Pulses, & Pips Conquered the Plant Kingdom and Shaped Human History, you’ll learn about a date seed that sprouted after lying dormant for nearly 2,000 years; cotton seeds that traveled more than 500 miles by wind and wave to gain new ground in the Galapagos Islands; and wild primates who “shop the apothecary of the rainforest” for the healing powers of plants … and seeds.

You can delve even deeper into The Strange World of Seeds on Thursday, April 4, at the Mütter Museum of The College of Physicians of Philadelphia, when Director of Education and Co-director of Living Exhibits Jacqui Bowman welcomes Longwood Gardens and award-winning author Thor Hanson to share even more stories about these tiny marvels of nature.

“Even entering into the space here at 22nd and Market is a treat,” Bowman says. “The College was founded in 1787, and has been based in this building since 1908, over 100 years. Downstairs is our Mütter Museum, which many people are familiar with, but the less-visited upstairs was built to host both the Historical Medical Library and scientific gatherings. The talk will be held in Mitchell Hall, a beautiful, oak-paneled, high-ceilinged room with portraits of former College presidents looking down upon the proceedings.”

On April 4, the spirits of those presidents will listen in on Hanson’s seed stories, as well as Bowman’s tales of plant and seed exchange in Philadelphia. “Philadelphia and botany have been closely connected for a long time!” says Bowman, citing an 1899 volume, The Botanists of Philadelphia and their Work, in which the earliest entry is for James Logan, born in 1674. “Probably the most famous plant and seed ‘exchangers’ are the Bartram Family, whose beautiful house and garden can be found in West Philadelphia.”

Bowman will also share the story of a lesser known seed saver, William Hamilton of the Woodlands (1745-1813). “He built a magnificent hot house on his property that was reported to contain 10,000 plants,” she says. In the 1990s, architectural historian Tim Long discovered 200-year-old seed packets in the attic.

After the talks, guests can browse a display of 13 “herbals”—visually rich texts that explore the role of plants in medicine. These books from the College’s Historical Medical Library represent many “firsts,” such as Le Grant Herbier (1498), the first herbal published in French; and The American Herbal, or materia medica (1801), the first herbal printed in the United States. The display also highlights the forms of illustration used between the 15th and 19th centuries as printing methods shifted from woodcuts to early lithography.

Outside the library walls, the Benjamin Rush Medicinal Plant Garden is a living collection with interesting ties to the herbals and history within. Although the garden is named for a colonial Philadelphia doctor who helped found The College and who believed physicians should have access to plants, it wasn’t actually created until The College’s 150th anniversary in 1937. Last year, Bowman acquired the task of helping to “re-curate” the collection.

“We’re still identifying all the plants that we have in the garden, and deciding on those that we’ll add this spring,” she says. “The central four ‘historic’ beds will continue to have plants used in colonial medicine.” The garden will also profile a series of plants such as Solomon’s-seal (Polygonatum biflorum) that are still used in medicine today. And students from the Girls One Diaspora Club will curate a mini-exhibit of medicinal plants used worldwide, including plants used by their families in Africa.

“There will also be a few ‘Mütter-y’ plants on display,” adds Bowman. “Some carnivorous plants, including some beloved by Charles Darwin, as part of a new bog garden. Some huge black sunflowers. And, of course, we cannot forget our baby corpse flower (Amorphophallus titanum), ‘Sir Stinkerton Esquire’.”

Bowman indulges her own love of plants in her basement terrariums, where she keeps ferns, carnivorous plants, and orchids—plants forgiving of her tendency to overwater. It’s the oddities of the plant world that thrill her, befitting her “Mütter-y” background.

Oddities abound in The Triumph of Seeds, as Hanson describes the fantastic strategies seeds have evolved to endure, defend, and renew themselves. But there is something else that fills these pages—open awe at the artistry of nature. There is Gregor Mendel, for example, in the solitude of his garden, discovering the mathematical beauty of the inheritance pattern of peas.

… And there are yet others, in the company of millions, who delight in the precise patterns of peas and beans (among other seeds) that grace Rose Parade floats each New Year’s Day. And so on Friday, April 5, Hanson will join float designer Jim Hynd at Longwood for A Community Conversation, to look at seeds from yet another angle—their sheer beauty.

Hynd’s floral artistry has appeared on more prize-winning floats than any other designer in the history of the Rose Parade. As vice president and floral director of Fiesta Parade Floats, Hynd selects the seeds, pods, petals, and other organic materials that cover each float, interpreting design details with just the right nuance of color and texture.

Longwood’s Associate Director of Display Design Jim Sutton, who will team up with Hynd for a Longwood Lecture on Tuesday, April 2, experienced the once-in-a-lifetime opportunity of judging the Rose Parade in 2018. He was wowed by “the sheer size of the entries, their level of detail, and precise execution.” As an example, he points to the perfect use of bean seeds to create a sea turtle’s tortoiseshell pattern, “at a level of detail a camera could never capture.”

Perhaps even more than the stunning artistry of the floats, Sutton was struck by the thousands of hours of effort and the human stories involved, including the significance of the floats both to those entering them and to those riding them. The artistic use of seeds and dried materials to bring the power of story to life was palpable in the 2018 “Gift of Time” float, which carried the portraits of 44 deceased organ and tissue donors, exquisitely rendered in natural “floragraphs”—while living donors and organ recipients rode or walked alongside.

This year, Community Readers will want to congratulate Jim Hynd on his many “seeds-to-floats” success stories. In the 2019 Rose Parade, Fiesta Parade Floats won awards for 9 of the 13 entries they designed, including the top prize—the Sweepstakes Award—presented for the most beautiful entry, which they created for The UPS Store. The winning float’s message? “Books Keep Us On Our Toes.”