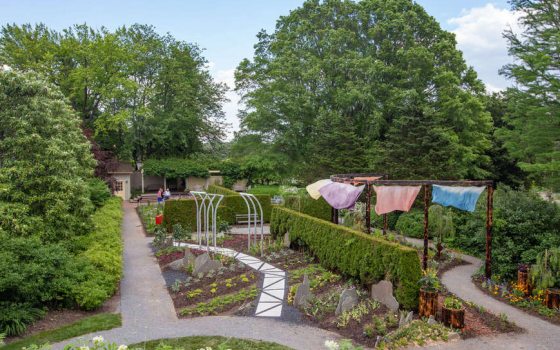 Gardens inspire us. But what inspires those who design a garden? For the second-year Professional Horticulture students who have designed this year’s Student Exhibition Garden, inspiration comes in the form of seeds—their resiliency, their resulting dyes and textiles, their importance in food crops, and the symbolism of seeding and growing an interest in biological science. The four spaces on display now through mid-October in our Student Exhibition Garden exemplify the process of garden design, with depictions of landscapes ranging from an arctic tundra to an open meadow.

Students Alyssa Stevens and Raymond Carter created Storing Hope: The Doomsday Seed Vault, a thought-provoking display meant to highlight the crucial role of horticulture in global survival and to feed the imaginations of future horticulturists. The garden is inspired by the Svalbard Global Seed Vault in the arctic tundra of Svalbard, Norway. Operating with a mission to protect humanity against the loss of critical food crops from manmade or natural disasters, the vault stores the seeds of genetically distinct agronomic crops from around the world.

The garden’s plantings represent such crops, consisting of species that hold agricultural value, planted in rows reminiscent of an agronomic field, while its design elements depict a snowy landscape and mimic the feel of walking through Svalbard’s subterranean tunnel preceding the inner vault.

Throughout the season, guests can experience successional changes in the garden. Direct-sown grain crops—the dominant plantings by mid-summer—will emerge amongst early season ornamental crops from the Brassicaceae family. As fall approaches, cooler season crops such as ornamental millet will be incorporated.

Inspired by a view of the Philadelphia skyline, once the world’s leading exporter of textiles, students Christine Varga and Nate Townsend created Woven, a display garden that focuses on natural sources of fibers and dyes. Townsend, with his passion for growing, helped to source about 35 representative but hard-to-find plants and seeds, from tropicals to natives to annuals.

Stroll the path that weaves through the garden and you’ll find Gossypium herbaceum ‘Nigra’, a deep purple-leaf cultivar of cotton; Nelumbo nucifera (lotus), whose stem fibers are used for cloth; and Xanthorhiza simplicissima (yellow-root), whose root makes a bright yellow dye … among other delights.

Artfully “woven” into the design of this garden are the symbolic fruits of their labors. Six colorful silk panels, hand-dyed by Winona Quigley of Green Matters Natural Dye Company in Lancaster County, drape a semicircle of 12-foot-tall arches, inspired by Christo and Jeanne-Claude’s 2005 exhibit in Central Park called “The Gates.”

Line Transect by Cody Caporaso and Meredith Mitchell resembles an open meadow and serves as an ode to the scientific inquiry of botany, conservation, and ecology. Caporaso and Mitchell designed the space to immerse guests in vegetation, observe familiar species, and seek out the new, all in hopes to seed and grow an adventurous interest in biological science.

The garden implements a linear transect—traditionally used to divide a surveying area—in order to elevate this utilitarian tool and display how the plants in the landscape enrich our lives.

In Seeds the City Chose, students Alexandra Correia, Lana Guardo, and Emrys Stromberg were inspired by the marvel of a plant growing up from a crack in the sidewalk, persisting despite overwhelming environmental challenges.

Their garden celebrates the resiliency of urban plants and seeds, bursting forth from an abandoned landscape.

This representation of an urban wildscape is centered on a constructed concrete ruin featuring a colorful street art mural by local artist and teacher Torrey Kist. Though some may think of the surrounding matrix of plants as “weeds,” these native and exotic species are examples of urban-adapted genera.

This summer, discover the art of garden design in our Student Exhibition Garden, and hear the students talk about their seeds of inspiration.