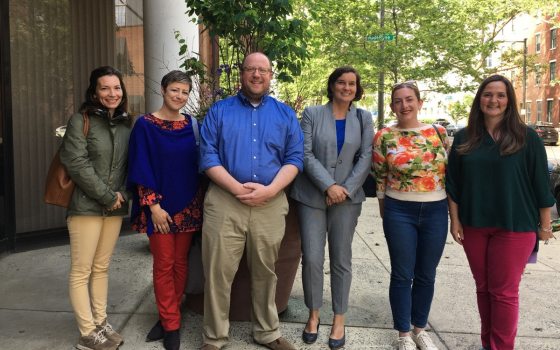 Entering an Organization as a New Leader: Fellows Leadership Salon

Gorgeous planters filled to the brim met us at the Pennsylvania Horticultural Society’s North Street offices as the 2019–20 Fellows attended our final salon as a cohort at this 189-year-old institution. PHS President Matt Rader, who has been in his role for three years now, led an inspiring salon focused on entering an organization as a new leader and discussed the importance of new leaders knowing their sector, assessing and understanding their organization, empowering their staff, and delivering outstanding quality to both the community and an organization’s supporters.

With a background in architectural history, finance, and management consultancy, Rader leads PHS with a renewed sense of direction and places great emphasis on building trust between PHS supporters, staff, and the community. Naturally gregarious, Rader builds from his love of gardening and growing in his desire to see plants—both as a source of food and beauty—at the center of Philadelphia community life.

Rader shared with us his considered approach to being new at an organization and detailed his first initiative in his current role: meeting individually with the many stakeholders of PHS and its programs—totaling 275 people! Meeting with each stakeholder took Rader almost 18 months but set the tone for an open dialogue with PHS and its community, supporters, and collaborators.

Once he gained an impression of the organization’s overall direction, Rader explained the implementation of PHSVision2027, a developmental process aimed at engaging thousands through community outreach, research, and listening. Staff were involved in the planning and implementation of this vision and helped develop the new focus together. During the planning and implementation process, Rader challenged his staff with the question “how will next year be different?” and placed emphasis on developing values, through team input, that supported a common goal.

During the salon, Rader spoke passionately about the importance of building capacity in others and how PHS has implemented several staff development programs, including cross-departmental staff pairing up to learn from one other and the provision of travel assistance for research trips. PHS’s focused investment on training others multiplies the impact to the community at large.

Rader also discussed the concept of Porter’s Five Forces Analysis, which the Fellows had studied together during our time at Darden Business School. In Five Forces Analysis, competing pressures within an industry, such as existing competitors, new competitors, substitute products, and the power of both customers and suppliers, are analyzed to identify a corporate advantage or potential new strategies. Rader explained how the concept of Five Forces Analysis helped him understand the local nonprofit, community, and arts sector and see the opportunity for PHS to increase its support of and impact on community garden programs.

One such effort is PHS’s LandCare Program; this nationally recognized land revitalization model that has led to the cleaning, greening, and stabilizing of more than 12,000 parcels of land in transitional areas. The initiative is carried out by a group of 18 local organizations who clean and plant these areas for the benefit of the community; the areas are then maintained by the community. PHS’s emphasis on offering local community support at a broad scale across the Philadelphia region speaks to the four main tenets of the organization’s programming: healthy food, livable environment, social connection, and economic opportunity. Together, these tenets guide PHS to make the greatest impact and garden for the greater good.