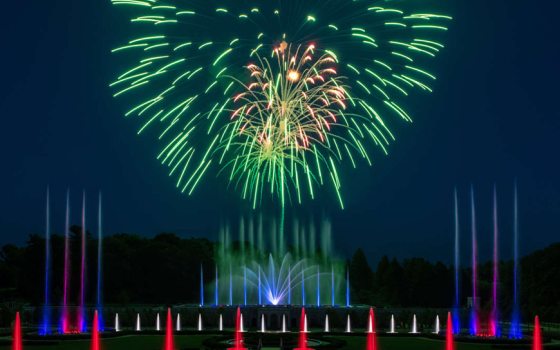 Flowers in the Sky

Fireworks at Longwood span a colorful history, from their debut during founder Pierre S. du Pont’s early garden parties and July Fourth celebrations to the spectacular Fireworks & Fountains Shows of today, set in the magnificent setting of our Main Fountain Garden. How appropriate that many fireworks effects—such as peony, chrysanthemum, and willow—are named after flowers and plants. You’ll see many of those aptly-named and truly breathtaking effects during our Swan Lake Fireworks & Fountains Show on August 10.

The du Ponts have had a two-century tradition of celebrating with fireworks, which is not surprising considering the family business. Even before Pierre purchased the Peirce farm, he was acquiring or contracting for commercial fireworks, especially for a large display to commemorate the DuPont Company’s centennial in 1902. He ordered simple do-it-yourself devices to celebrate his first July 4th at Longwood in 1907, with larger professional displays for the 1909, 1911, 1912, and 1922 Garden Parties, and for 1924 and 1930 July Fourth celebrations. Although the 1922 hour-long display was set off from the site of the future 1931 Main Fountain Garden, it was not until 1980 that fireworks were first used with the fountains.

Four decades, 160+ shows, seven commercial suppliers, and 10 pyrotechnic designers later, Longwood’s fireworks are now engineered by Art and John Rozzi of Arthur Rozzi Pyrotechnics of Ohio, in conjunction with the Gardens’ fountain designers. The process is simple in theory but complicated in practice. Longwood sends the finished music track to the Rozzis, along with an outline of places in the various songs where fireworks seem appropriate. The pyrotechnicians then get to work, building on Longwood’s suggestions but adding their own design expertise and hundreds of split-second cues that fit perfectly with the prominent beats of the music.

Art Rozzi estimates that it takes him 100 hours to design one show from start to finish. The more he hears the music, the more his ideas crystallize, with 17 different firing locations to choose from and 12 different angles available to aim the mortars. He uses the latest fireworks visualizer software which shows him what it should look like. It also generates information that helps him with timings entered into a separate Pyro Seeking Digital Firing System that links with Longwood’s fountain computers via a timecode. The fountain computer has its own water visualizer, so with enough lead time, Rozzi can study a computerized video of the proposed fountain display as the starting point for his fireworks design.

Rozzi has designed a spectacular display for our upcoming Swan Lake Fireworks & Fountains Show, complete with effects that pay homage to the flowers and plants for which they are named. Look for several peony effects of red, blue, green, yellow, and violet, characterized by a spherical break of colored stars that burn without generating a trail of sparks.

The show is rich in chrysanthemum effects, or a spherical break of colored stars whose stars leave behind a trail of sparks. The Swan Lake show will boast a variety of chrysanthemum colors, as well as color-changing chrysanthemum effects shifting from violet to lemon, and red to green to silver, with pistils of silver and gold.

The willow resembles a chrysanthemum, but with long burning silver or gold stars that produce a soft canopy-shaped weeping willow-like effect and will be seen in golden form during the show’s Coda in Act II.

A palm shell contains a few large comet stars, which in bursting create large tendrils that give it the appearance of a palm tree. Look for several palm effects from crackling green to vibrant yellow palms during the show’s Spanish Dance in Act III. Swan Lake will also feature such dazzling effects as the Japanese poinsettia, popping brocade flower, and a bouquet of 1000 flowers, throughout this delightfully elegant, entertaining show.

Over the years, almost every known type of shell has burst above Longwood. Typically, there are more than 700 large shells in a show, with more than 1,000 front effects (mines, comets, candles) in the last 10 minutes and 1,300 to 1,500 shells in the finale, which usually spans the last two to three minutes.

But we won’t give away the ending … come experience it for yourself.