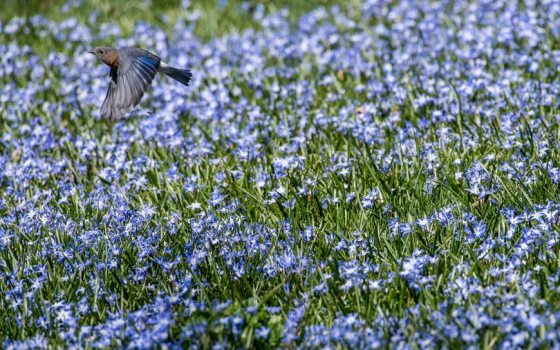 As you’ve wandered in our Meadow Garden you may have wondered about the wooden boxes perched up on poles along the paths. These 200 small, sturdy houses spread throughout our natural areas are homes for Eastern bluebirds (Sialia sialis), a native songbird found from Canada to Nicaragua that lives in our region year-round. The houses you see are built, maintained, and monitored by dedicated volunteers with the help of Longwood’s Land Stewardship and Ecology staff, who together work to preserve and restore habitats for species like the Eastern bluebird. During Longwood’s temporary closure, staff who live on and near the property have risen to the occasion, learning how to monitor the nest boxes while we eagerly await our volunteers’ return. If you live in a place where Eastern bluebirds might thrive, you can support this species at home with your own bluebird house.

What makes a good home for a bluebird? Eastern bluebirds require open habitats like meadows, clearings, and farm fields to find the food and nesting places they need. They’re secondary cavity nesters—meaning they build their nests in holes in trees that have been excavated by animals or other birds. Today, a large proportion of Eastern bluebirds make their homes in boxes provided by people. Human-built nest boxes are designed to provide them with both shelter and safety from predators. You can also provide plants that feed bluebirds, like red chokeberry (Aronia arbutifolia) and flowering dogwood (Cornus florida). Eastern bluebirds don’t often visit bird feeders offering seed, but they can be frequent diners at a buffet of mealworms. The best place for a bluebird box is in or on the edge of an open meadow or field, with nearby places to perch while looking for insects to eat. The opening of the nest box faces out of the prevailing wind and, if possible, toward shrubs or trees so fledglings have a target for their first flight. A predator guard on the pole helps to keep snakes, squirrels, and other hungry creatures out of the nest.

At Longwood, our nest boxes are built according to plans that have been honed over time to give the best shelter, temperature regulation, and protection from predators. Our design was created by one of Longwood’s first leaders of the bluebird project, Warren Lauder. Under his wing, the number of bluebird houses on Longwood’s property grew from just a few in 1972 to 100 boxes by 2003. Lauder redesigned the Audubon nest box most frequently used at the time—making it larger, deeper, and adding ventilation to encourage a higher fledging rate by keeping summer temperatures down and predators out. This design, with its sloped roof, can be seen across Longwood today. If you’d like to make a Lauder-design box for yourself, you can find instructions on the Audubon Society website. Bluebird houses can be also found at stores selling bird food and hardware, and you can find nest box and nest structure plans for a variety of species on the NestWatch website, part of the Cornell Lab of Ornithology.

In early spring, a female bluebird begins to build a nest, a loosely built cup of dry grasses, herbs, or pine needles, with a lining of finer grasses and sometimes soft animal hair or feathers. Once the nest is complete, she lays three to five sky blue eggs (called a clutch).

The nestlings that hatch from a single clutch of eggs are called a brood (the act of sitting on the eggs and then the nestlings to keep them warm is called brooding). Eggs take about two weeks to hatch, and then both parents begin hunting non-stop to bring the nestlings soft insects, grubs, small beetles, and occasionally ripe berries. Nestlings must eat every 20 minutes, 15 to 18 hours each day! In spring, summer, and autumn, Eastern bluebirds feast on a variety of insects found in meadows–including grasshoppers, crickets, ground beetles, caterpillars, and spiders. Like many birds, they feed their young entirely on insects in the springtime.

As the nestlings grow flight feathers and fledging time approaches, parents feed the chicks even larger quantities of insects from dawn to darkness.  Young birds leave the nest a little more than two weeks after hatching. The male bluebird tends to these recently fledged young while the female builds a new nest; a bluebird pair may produce two or even three broods between mid-March and mid-August. Throughout the breeding season, which lasts through August, we check in on the welfare of bluebirds nesting in every one of these boxes about once a week. Following protocols for nest watching with great care, we count eggs and nestlings, remove pests, and even clean the nest box once all the nestlings have flown off so that it can be used again right away. Bluebirds can tolerate cold weather, and over winter they eat the fleshy fruits of shrubs and small trees like flowering dogwood and chokeberry.  They seek out berries less than half an inch wide that they swallow whole—no chewing or crushing. These berries, like blackberries and other fruits that attract birds, contain seeds that survive the digestive journey to be deposited in a small pile of fertilizer. Many bird-dispersed plants can be found growing in neat rows beneath fences and power lines where birds perch after eating.

Before Europeans arrived in eastern North America, forests covered much of the land. As European land uses transformed American landscapes, forests were converted to fields and pastures—expanding habitat for grassland birds like the Eastern bluebird, bobolink, and Eastern meadowlark. With economic changes, forests expanded again as farms re-forested, and bluebirds declined. More recently, both fields and forests have been transformed into buildings and roads as cities have expanded. Fortunately for bluebirds, people now value, preserve, and restore meadow habitats like the Longwood Meadow Garden, and thousands of bluebird houses have been built by volunteers and conservation groups across the bluebird’s range.

Since the 1970s, when Longwood staff first began to establish “bluebird trails” of nest boxes in the meadows and fields of our natural areas, our conservation efforts have contributed to reversing the regional decline of this iconic species. Bluebird populations at Longwood have steadily grown, and every year our nest boxes hatch hundreds of young bluebirds, as well as some other cavity-nesting species like tree swallows, house wrens, and chickadees. This incredible effort has been sustained by the dedication of staff and volunteers who care for and monitor the nest boxes, collecting data and ensuring the nests are safe from predators and nest parasites, to give the Eastern bluebird a long-term home here at Longwood.