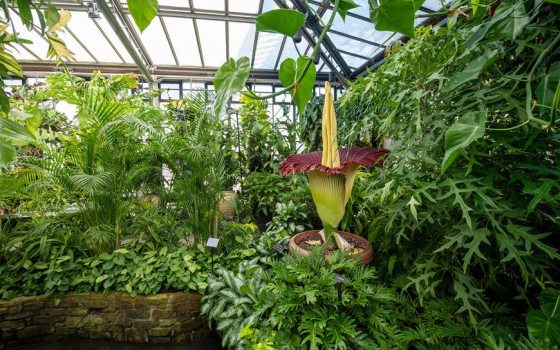 The Scent-sational Story of Sprout

Our Conservatory’s Tropical Terrace is home to one of the rare wonders of the botanical world … and this rock star plant has just completed the performance of a lifetime. The massive titan arum (Amorphophallus titanum)—more descriptively known as “corpse flower” because of its tear-inducing stench—is an exceptionally fast-growing rainforest native that boasts one of the largest inflorescences—defined as a cluster or spike of individual flowers—in the plant kingdom. Affectionately named Sprout, our very own titan arum has thrived in our Pennsylvania summertime heat and humidity, which helped it put on an amazing show for our guests last week. Measuring in at an astounding 80 inches tall, Sprout began unfurling and blooming during the early evening of July 13, captivating us—and those experiencing it in person and via livestream—with its beauty, its rarity, its signature stench, and its fascinating story of a true horticultural feat, our commitment to conservation, and a spectacle excitedly enjoyed and shared by so many, both near and far. Sprout’s caretaker, Senior Horticulturist Joyce Rondinella, says it best: “The timing of this spectacular bloom allowed us to take pause from the current situation and, for a fleeting moment, feel that all is right with our world.”

What makes a titan arum just so remarkable? The titan arum is an aroid, or a member of the Araceae family. Aroids in general have an inflorescence consisting of a spathe (specialized bract) and spadix (flower-bearing protuberance); with more than 3,000 species, they encompass a huge variety of shapes and sizes. The titan arum is native to Sumatra, an Indonesian island in the Indian Ocean bisected by the equator. Sumatra is characterized by active volcanos and ancient tropical rainforests, and titan arum generally grow in colonies on steep, forested hillsides. The plants grow from the largest tubers (or modified underground storage stem) in the world, weighing, on average, 110 pounds.

A titan arum consists of both male and female flowers. These tiny flowers are enclosed by the spathe, which first appears like a pleated accordion and plays a big role in letting spectators know when the plant is about to bloom—a rare thing to behold in the wild or in cultivation. The spathe turns maroon in color and begins to unfurl, a process that typically begins in mid-afternoon and lasts several hours. At the conclusion of the unfurling process, the spadix and hundreds of small female flowers at the base of the spadix are more exposed.

When the female flowers attached to the central spadix are ready to receive pollen, the plant gives off an odor reminiscent of decaying flesh ... an extremely pungent odor that can travel for up to half a mile. While not a pleasant smell for most, it’s highly attractive to its native pollinators—flies and carrion beetles, which are active at night looking to feed and lay eggs on decaying animals, or a smell emulated by the titan arum. The smell dissipates soon after, the spathe closes, and the flower withers away.

Amorphophallus titanum was first discovered in Sumatra in 1878 by Italian botanist and plant explorer Odoardo Beccari. He collected seeds to send to a friend in Italy, who attempted to grow them in the Mediterranean climate. One of the resulting seedlings was given to the Royal Botanic Gardens, Kew, where it flowered for the first time in 1889 with an inflorescence towering almost 7 feet tall and causing quite a sensation.

Since that time, botanical gardens worldwide have continued attempts to grow titan arum successfully outside of their native habitat. Prior to last week’s bloom, Longwood last had a successful bloom in April 1961 from a tuber received from Sumatra in 1957. An April 15, 1961 article in the Wilmington, Delaware Morning News reported that a night watchman had, not realizing what it was, “found its stench so overwhelming he reported a gas leak.”

Fast forward to our friend Sprout, who was started from seed in 2008 at the University of California, Berkeley before traveling to Chicago Botanic Garden as part a worldwide conservation effort to preserve the species. Sprout bloomed at Chicago Botanic Garden on April 26, 2016 and was delivered to Longwood Senior Horticulturist Joyce Rondinella on August 21, 2018.

Under Joyce’s excellent care, Sprout had a large leaf growth on display for about a year before it died back and went dormant in November 2019. Dormancy is extremely important for titan arum tubers. They must be kept at the right temperature (65 to 70 degrees Fahrenheit), and kept barely moist since they are prone to rot. Joyce repotted the tuber in early March 2020 and was rewarded when the growing tip of the inflorescence emerged in mid-May!

Since mid-May, Sprout’s inflorescence grew quickly, progressing from a mere 4.5 inches tall on June 5 to more than 6 feet tall by bloom time. As the days became hotter and more humid, the growth accelerated, much to our delight, to as much as 6 inches in a 24-hour period. Longwood staff eagerly watched the growth and counted the days until its eventual bloom … and our Members, guests, and new-found fans watched along with us, thanks to our 24-hour livestream, constant social media updates, and all the attention Sprout garnered from media.

We delighted in the reactions to Sprout via social media, with followers thanking our “fascinating” and “stinky yet beautiful” Sprout for its “incredible show”, among thousands and thousands of other #SproutStinks shares, comments, and reflections. Sprout even helped gardens across the globe connect with one another and share in the collective excitement of an imminent bloom, by engaging in  conversations on Twitter with fellow titan arums New Reekie at The Royal Botanic Garden Edinburgh and Bob Smellanor at Franklin Park Conservatory. What’s more, Sprout served as the backdrop for a marriage proposal the night of July 13! We certainly felt the love, as did Joyce. “I didn’t know how deeply moved I would be to see the joy exuding from everyone who came to see Sprout,” she shares. “It warmed my heart to see the excitement and wonder in the kids’ eyes as they stared up at this amazing plant.”

Embodying a true horticultural feat and our steadfast commitment to conservation, experiencing Sprout was amazing for those able to see the spectacle from both near and far. But Sprout’s story doesn’t end there. Sprout will return to our growing houses to get ready for its next period of dormancy, which typically lasts 3 to 6 months. When it re-emerges it’s likely that it will produce another leaf … and there’s always the chance it will flower again, as once a titan arum gets to a size capable of flowers (usually after 10 years), it can reflower every 3 to 4 years under the proper culture and environmental conditions. Stay tuned!