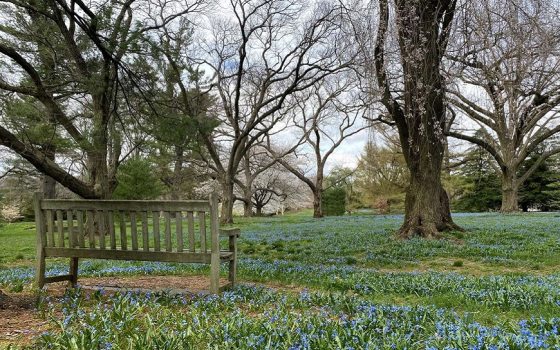 What better place is there on a hot summer day than a shady, sun-dappled, green oasis? Due south of Longwood’s Conservatory, just behind the grand spectacle of the Main Fountain Garden, is a lush and peaceful garden destination that is ripe for exploring. Towering, century-old trees, winding pathways, and hidden benches await guests any time of year in Oak and Conifer Knoll. It is an all-season destination with a rich history and serene beauty.

Prior to 1929, when construction on the Main Fountain Garden started, the knoll behind the future fountains was covered in cornfields—which certainly would not make a dramatic backdrop. When Longwood founder Pierre S. du Pont was planning his engineering marvel in the Main Fountain Garden, he knew that the fountains would be much more visible if they had a dark backdrop behind them for contrast.

Mr. du Pont asked Ardmore, PA landscape engineers Lewis and Valentine Company (who had done other work in the Gardens) to transplant hundreds of mature trees and shrubs to the knoll over the next several years to create that green backdrop. A 1928 Lewis and Valentine advertisement featuring Longwood was headlined “The magic of modern Landscape Engineering” and their horticultural conjuring later transformed that agricultural hillside into what we know today as Oak and Conifer Knoll.

Oak and Conifer Knoll is, of course, not merely a backdrop but a truly lovely arboretum with a wide variety of beautiful trees. Mr. du Pont indeed referred to it as the “new arboretum” to distinguish it from Peirce’s Park, the “old arboretum.” Those mature trees that were relocated by Lewis & Valentine from 14 states in the late 1920s and early 1930s have now had almost a century to settle into their new Pennsylvania hillside home.

Conifer Knoll was planted in groves (small groupings of trees), with open glades interspersed between. These are really the trees that provide the dark, green backdrop for the fountains, as well as provide a windbreak from south winds that could affect the fountain display. In addition to wanting trees that were already mature, Mr. du Pont requested “the best specimens” that Lewis and Valentine could find for the knoll. Trees do not live forever of course, but, happily, many of those lovely specimens remain in Conifer Knoll today. Some are even Pennsylvania Champion trees, or the largest recorded specimens of a particular species or variety.

While in Conifer Knoll, we encourage you to venture off the pathways and get up close to the trees. Wander the groves and glades and take a look at the brass label on each tree (found on the north side, about head height). Each label includes the plant family, botanical and common names, nativity of the tree, and our Longwood accession number for tracking and recording purposes.

The staff who care for Conifer Knoll have shared some of their favorite trees there:

A favorite of Director of Grounds Shawn Kister, dawn redwood (Metasequoia glyptostroboides) is an ancient, deciduous conifer planted during Mr. du Pont’s lifetime, but not by Lewis and Valentine. Long thought to be extinct, a Chinese official found one in remote central China in 1944. Plant collectors from Harvard’s Arnold Arboretum were dispatched to bring back seed, which was then shared with other botanical gardens, including Longwood. Two towering specimens are in Conifer Knoll and are not to be missed for their soft needles and unique structure and bark texture.

Director of Outdoor Landscapes Andrea Brunsendorf cites momi fir (Abies firma) as a favorite. Planted in a large cluster, these Japanese-native giants came from a California nursery in 1930. The tallest, at almost 100 feet, is on the list of Pennsylvania state Champion trees. She thinks they look especially impressive and dramatic poking through the mist in the early morning.

Records show that a ribbon of blue-toned trees was originally woven into the fabric of Conifer Knoll—some of which can still be seen today. The blue China-fir (Cunninghamia lanceolata ‘Glauca’) is a more recent addition to Conifer Knoll, as well as a favorite for Senior Horticulturist Amy Bloom. The species Cunninghamia lanceolata can reach 150 feet in the wild. The wood, which is well-suited for and often used in construction, shipbuilding, and for furniture in China, is strongly resistant to rot and termites.

As with Conifer Knoll, many oaks from the original 1930s plantings remain, but time, environment, and disease have also taken a toll. Longwood’s Tree Management Plan guides staff in the care of all trees on the property. Trees are systematically checked in December and in the spring, and any that are seen to be in declining health are put into a review process. Three to five young replacement oaks of various ages and sizes are planted as needed, instead of one to one as they are lost.  Oaks have many inherent health problems, and staff thoughtfully choose new plantings that are best suited to the environment and the changing climate.

While in Oak Knoll, look for the Pennsylvania Champion Shumard oak (Quercus shumardii) near the Eye of Water. Shumard oak is considered an endangered species in Pennsylvania due to declining populations. Longwood's Champion is more than 70 feet tall, and a grand beauty!