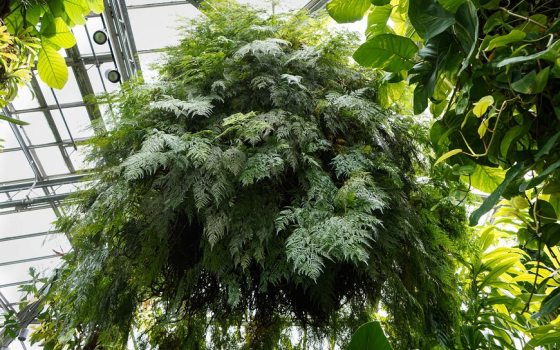 It might be said that the rabbit’s-foot fern in Longwood’s largest hanging basket has lived a charmed life. Housed for many years in the Tropical Terrace, the Davallia fejeensis 'Major' has been provided just the right conditions to thrive and grow in view of generations of Longwood guests. The basket was originally planted with several small plants in sphagnum moss in 1952 … meaning this plant has been with us for nearly 70 years. For some historical perspective, in 1952 Elizabeth II was crowned Queen, Harry Truman was ending his second term as president, and the iconic musical film Singin’ in the Rain debuted at Radio City Music Hall. This hard-to-miss green giant hangs in the center of the Tropical Terrace and now measures a sprawling 9.5 feet in diameter.

Ferns, in the taxonomic division Pteridophyta and also commonly known as pteridophytes, are non-flowering vascular plants with leaves called fronds, that reproduce by releasing tiny spores. They are thought to have first appeared around 360 million years ago. The genus Davallia, named for 18th century English botanist Edmond Davall, is in the largest fern family, the Polypodiaceae—which occur worldwide in a variety of habitats. Davallia fejeensis is a tropical fern native to the Fiji Islands in the South Pacific, as its species name implies. The conditions in Longwood’s Tropical Terrace are similar to Fiji’s tropical climate and help all of the plants in this greenhouse flourish.

Senior Horticulturist Joyce Rondinella has been the caretaker of the Tropical Terrace since 2005. She describes guests being in awe of the massive size of the Davallia and hears many people commenting on its longevity. She feels that many see it as an old Longwood friend. Joyce likens standing under the basket to standing under a large tree, and she can easily be hidden by its dangling fronds when working on the plant. The common name of rabbit’s-foot fern comes from the fuzzy brown rhizomes, visible in the tangle of roots under the basket. In its native environment, this fern must depend upon these rhizomes to obtain nutrients by trapping decaying organic matter. The rhizomes also extract moisture from the air.

You may recognize many of the plants in the Tropical Terrace as those similar to familiar houseplants. Because of the vigilant care Longwood staff can provide they grow to become extraordinary specimens. The Davallia fejeensis is the only plant in the Tropical Terrace with permanent drip irrigation, or tubing that can provide the large daily quantity of water it requires. We also provide this plant with fertilizer from spring until fall. It sheds in mid- to late winter, during which we remove brown fronds so it will re-flush. Pennsylvania summertime sun can be too strong for the rainforest plants in the Tropical Terrace, so our painters whitewash the glass roof throughout the summer to help shade the plants.

Ferns have historically gone in and out of fashion with home gardeners. The height of their popularity was arguably the British Victorian fern craze that became known as “pteridomania.” From the mid-19th through early 20th century some became obsessed with collecting exotic ferns that could now be transported from the tropics in glass boxes known as Wardian cases.

Ferns became a very popular plant in America during this period as well, and many beautifully illustrated books were written about them. Longwood’s founder Pierre S. du Pont owned several books about ferns, including American Ferns; How to Know, Grow and Use Them (1935), and Ferns and How to Grow Them (1909).

When Mr. du Pont opened the Conservatory in 1921, it included the Fern Passage, a beautiful space devoted to the display of both familiar and exotic fern specimens. It serves the same purpose today, delighting guests with a wide variety of ferns including Boston, staghorn, hare’s-foot and bird’s-nest ferns. Australian tree ferns have long held a place on display in our Exhibition Hall, and ferns can be found throughout our lovely outdoor gardens.

Longwood’s stalwart Davallia fejeensis ‘Major’ is a worthy descendent of ancient ferns, thriving and withstanding the test of time. And our old friend is still here, waiting for you to marvel in person once again.