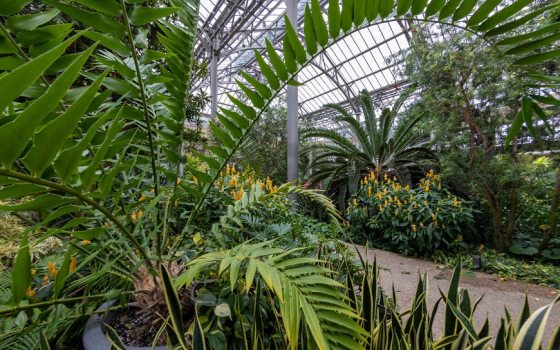 Longwood Reimagined: A New Garden Experience is equal parts expansion and preservation—but it’s also an endeavor rooted in our love for our plants, place, and people. Not only is this project the largest expansion, reimagination, and preservation of our Conservatory and surrounding landscape in Longwood’s modern history … it’s also a physical representation of our commitment to our past, present, and future. We don’t take it lightly that we are the steward of one of the world’s most important collections of gardens and glasshouses, and one perfect example of that commitment to our collection lies in the 55 plants we’ve moved from their previous West Conservatory locations to new permanent homes in our Main and East Conservatory display spaces … moves that have required massive equipment and far-reaching imagination, especially when it comes to transplanting everything from a 1,380-pound rabbit’s foot fern, to towering palms, to rare cycads, and many more beloved Longwood plants. Aside from those 55 plants now in the Main and East Conservatory spaces, we moved approximately 6,000 individual plants from the previous West Conservatory to nursery and greenhouse spaces, where we’re holding them for future display here at Longwood.

To help us decide which West Conservatory plants would make their way to new homes at Longwood and at partner gardens, we evaluated all plants for their importance to our collections, their legacy to Longwood, and their rarity in the plant world. We have distributed the remaining plants to other regional public gardens to add to their collections, while some specimens that were not rare and are readily available were added to our compost stream; we also distributed the propagations of significant plants to other gardens.

One of the plants to make its way to its new Longwood East Conservatory home is our beloved rabbit’s-foot fern (Davallia fejeensis ‘Major’), which has been part of our collection for nearly 70 years. This hard-to-miss green giant in a hanging basket measures a sprawling 9.5 feet in diameter and weighs nearly 1,400 pounds—which meant it required a very carefully planned and implemented move from its previous Tropical Terrace location to its new Camellia House home in late March.

Transplanting the fern was a two-day, highly collaborative process among our Horticulture and Facilities teams, as well as Bancroft Construction Company. The move required us to create an opening in the roof of the Tropical Terrace to then lift the plant via crane, shuttle it around the Conservatory and bring it back inside through the East Conservatory entrance to the Camellia House.

Adjacent to our Camellia House and its new rabbit’s-foot fern, our Indoor Children’s Garden is now home to our collection of staghorn ferns previously found in our Fern Passage, as well as the fruit-bearing banana trees previously found in Palm House and Banana House. The collection of staghorn ferns is now a focal point at the entrance of the Indoor Children’s Garden, perfectly poised together on a redesigned column. Our Facilities team created a false sleeve around each column so that we could attach the staghorn mounts directly to the wall. We then placed chicken wire between the wall and the mounts before attaching the mounts, so we would have additional attachment points for the numerous Tillandsia that surround the staghorn ferns.

We moved a variety of banana plants from the Banana House and the Palm House to their new Indoor Children’s Garden location, which is a somewhat tight space but perfect for the bananas’ narrow growing habit that allows them to fit well within the space. Displaying them in the Indoor Children’s Garden will allow their subtle differences to be more easily noted, and the location provides a great deal of warmth and almost full sun, which should keep these plants very happy.

We also moved our popular cacao (Theobroma cacao) from its prior Tropical Terrace home to a container on the south side of the Oval Basin in our East Conservatory. We have elevated the cacao by placing it in one of our tallest pots in the Conservatory, thereby putting its canopy above eye level and making its outstanding fruit the star of the show! We selected its high-traffic East Conservatory location so the plant can be observed by many and surrounded the plant with small containers to help protect its delicate fruit.

Some of our oldest and largest cycads from the Palm House were transplanted to the East Conservatory, including the Encephalartos woodii pup (an offshoot of the plant), which was planted directly across from its famous clonal parent in the East Conservatory.  Now, guests are able to observe the notable differences in form and foliage between the parent plant and its clone. A close look at their foliage shows many distinct differences.

In early May, we worked with Ambius—a firm that has specialized in moving and rigging large plants for many decades, and have assisted us with the move of several of the large specimens associated with Longwood Reimagined—to move two large cycads (one Cycas circinalis and one Dioon spinulosum) to the East Conservatory. The move required us to remove a portion of the Palm House exterior to accommodate the transplant of these towering plants.

Now, both our male and female Cycas circinalis are planted outside the Ballroom near each other, so they may be viewed together. These two large cycads help create the feeling of being under a canopy, and they really stand out as you walk down the north path of the East Conservatory. Each of the cycads moved to the EC was placed very intentionally, and each serves a beautiful purpose.

We are beyond proud to be able to give these plants new forever homes in our Main and East Conservatory display spaces … and we anxiously await being able to unveil those we have kept for the West Conservatory as soon as that new display space opens in fall 2024. Until then, come see our old friends as they continue to delight and inspire in their new locales, and take in the new color, height, texture, and rich stories they bring to their new surroundings.