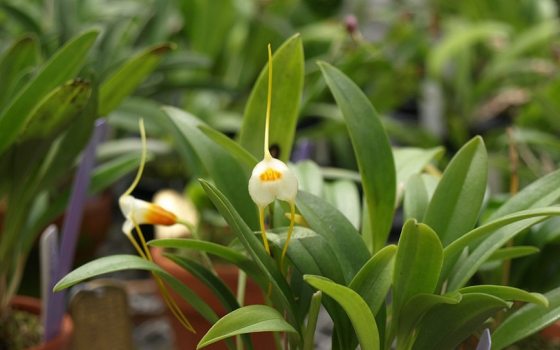 What’s in a Name: Indigenous Orchids of the Andes Mountains

The language of plants is one filled with beauty, wonder, and vast cultural history—and it’s one that I’m further learning and happily sharing as the plant records intern here at Longwood. I began my internship this summer, bringing with me only a few years of experience in public gardens but a lifelong fascination of the intersection of people, plants, and place. This fascination led me to pursue studies in anthropology, linguistics, and indigenous North American and  Latin American studies. In my first few weeks here at Longwood, I found that my linguistics background would definitely come in handy … especially when I made an orchid discovery that would bring my past studies and my current plant records work full circle.

When I began my academic career as an undergraduate student at the University of Massachusetts Amherst, I was fortunate enough to study Quechua, a family of indigenous languages from the Andes Mountains in Peru, Ecuador, and parts of Bolivia. Quechua was spoken by the Incan Empire and today there are about 24 dialects and 8 to 10 million speakers. After graduating in 2017, I moved to Philadelphia—partly to stay in proximity to the Quechua language program at the University of Pennsylvania. As my interests shifted, I gained my first few years of public horticulture experience at the Morris Arboretum in Philadelphia, where my curiosity was sparked by plant names and botanical naming convention. I was surrounded at all times by brilliant horticulturists who spoke fluent botanical Latin, and this inspired me to learn the language of plants.

Upon my start as the plant records intern at Longwood, when recording the names of some recently donated orchids to our database, the species name of one orchid from Bolivia—currently housed in our research greenhouse—stood out to me. I realized the name didn’t look like any Latin I was familiar with, so I inspected the tag further. To my surprise, the species name was in Quechua!

That orchid is Masdevallia chuspipatae. This species grows at high altitudes in the forests of the Yungas Mountains in Bolivia. In Quechua, the word ‘chuspipata’ means ‘the top of a fly’. Perhaps this orchid received its name from its color and shape, as it looks like a Bolivian flying pollinator! Our specimen in the research greenhouse sprouted a flower stalk on July 9 and the flower finally opened on July 16. I was thrilled to see it in person!

My discovery of this Quechua species name in Longwood’s collection inspired me to dig deeper. Many of the orchids in the genus Telipogon grow in the Andes and have names in indigenous dialects. Telipogon orchids are difficult to grow in cultivation because they require shade and cool temperatures to grow, and I was surprised to find so many Quechua names within the genus. These names include Telipogon antisuyuensis and Telipogon phuyupatamarcensis. In Quechua, ‘antisuyu’ means 'region of the sunrise' and 'phuyupatamarca' means 'town above the clouds'.

Another interesting Quechua orchid name is Telipogon kosñipatensis. This Latinized name might be translated to 'qusñipash', which may be derived from a dialect of Central Quechua. Qusñipash translates to a term akin to 'smoky' or 'through the smoke'. In these examples, each plant name refers to landscape features of the areas where these orchids grow.

I spoke with Longwood Senior Horticulturist Greg Griffis, our orchid grower, about the Masdevallia chuspipatae orchid that took me by surprise and he offered some insight. In the last 10 years or so, South American taxonomists have been taking advantage of improving resources at universities, which has led to a resurgence of interest in naming and describing plants. New species, or new descriptions of existing species, are being discovered and documented by local taxonomists.

With these newfound discoveries comes a change in the way orchids get their names. Some orchids become reclassified as other species, while some species are so distinct—genetically and structurally—that they’ve been designated their own genus … such as Quechua glabrescens, which is named to honor the indigenous language. Preserving indigenous languages in the field of plant nomenclature (the study of naming plants) is key to understanding how people and plants coexist and grow together in a living landscape. By including indigenous words in the scientific name of the plant, taxonomists can honor the original names, places, and uses of the plant by the people who have always lived there. Accurately reassigning names and descriptions allows South American taxonomists to reclaim ownership of plant names in a way that pays respect to indigenous people and places.

Longwood’s Masdevallia chuspipatae was recently donated as part of a collection of Dracula and Masdevallia orchids by Mrs. Vera Lee Rao … which serves as a big step forward for Longwood’s Dracula collection, as, according to Griffis, they are “very well grown plants.” While Masdevallia chuspipatae is tiny at the moment and not yet ready for public display, guests can expect this orchid to go on display in future years once the plant and the flowers mature. In the meantime, you can see other Masdevallia and Dracula species currently on display at the Orchid Display near the Green Wall … where you may not only enjoy their beauty but ponder what’s behind their names.