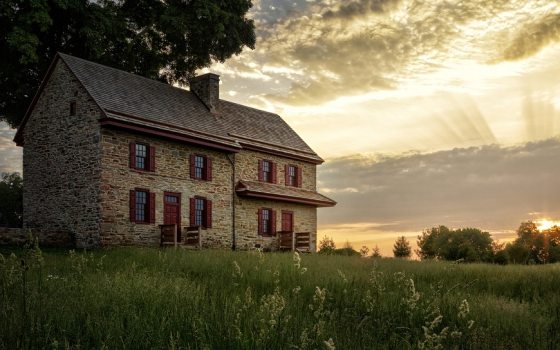 A Farmhouse, A Story

Among the drifts of native flowers and grasses within our 86-acre Meadow Garden you’ll discover the historic Webb Farmhouse & Galleries with its architectural beauty … and a story to tell. The Colonial house, which has stood on the Longwood property since the early 1700s, was selectively restored in 2014 to serve as a gallery space, showcasing the evolving seasonal beauty of the Meadow and the story of the people who have inhabited and influenced the land. Throughout all seasons—including the current time of year in which our Meadow Garden particularly shines with its emerging autumn color—and throughout the years, the farmhouse serves as part destination and part object in the landscape, providing reference to those who have lived on the land before.

The Webb Farmhouse’s history spans a long time before Longwood Gardens existed, and the evolution of the land helps tell its story. Guests will find four maps in the east gallery of the farmhouse to help see how the land has evolved over time due to those who have lived on it. The property’s earliest owners were the Lenni Lenape, who were the earliest inhabitants living in this region. They traveled throughout the abundant landscape that was primarily forest land, thriving on hunting and fishing. They cleared small areas in the heavily wooded land to establish encampments and plant corn, bean, and squash. In 1681, James Wallis of England purchased the 1,000 acres of land from William Penn. Over time, the land was divided and deeded to several others including William Webb (1684–1753). Despite Penn’s promise of justice and tolerance, distrust and conflicting interests finally drove the Lenni Lenape from the land, and new settlers discovered the rich soils of the region and growing opportunities to thrive as farmers and merchants.

Eventually, Webb purchased the land that made up part of what is today’s Meadow Garden. He acquired 203 acres from George Harlan in 1713, and later 301 acres from Samuel Pyle in 1725. It is upon the Pyle land that the Webb Farmhouse was built, most likely between 1734 and 1735. Although Webb owned the land, the house was probably built for and inhabited by his son, William Webb II (1710–64), and several generations of the Webb family.

By the late 19th century, local farmers had established the region as a center for agriculture. The early settlers developed a close relationship with the land because their future depended on it to produce the crops and raise the livestock that supported life. Their houses, barns, spring houses, water-powered mills, and other structures were designed and built in the context of, and with the greatest respect for, the land. It is the architecture itself, as well as its context with the land, that is a defining characteristic of Chester County.

As the population grew in the early 1900s, the original landscape of southeastern Pennsylvania opened up to industry, towns, and roads. Agriculture was flourishing, and at the same time an increasing national concern for land conservation was growing. Accelerated under Theodore Roosevelt’s presidency, preservation efforts became local as well. Industrial and philanthropic leaders like Pierre S. du Pont became deeply engaged in such movements as forest management and land preservation.

In 1906, Pierre S. du Pont, Longwood’s founder, purchased Peirce’s Park, an adjacent arboretum to preserve the magnificent trees, which were in danger of being cut for lumber.  Du Pont established an ethic of stewardship and preservation that influenced his farming activities as well, expanding the property by making numerous purchases of adjacent land. Two of his significant purchases, the Merrick farm and the Webb farm, became central to his agricultural activities and to the Meadow Garden today. Du Pont continued to use the land for agricultural purposes for many years, and most of the agricultural fields were gradually transformed into open landscapes. By the mid-1970s, the land became a wildflower garden and meadow under the guidance of mineralogist and botanist Dr. Edgar Wherry (1885-1982). Later design enhancements were added by landscape architect Sir Peter Shepheard (1913-2002).

In 2014, Longwood engaged Jonathan Alderson Landscape Architects of Wayne, PA to join two landscapes, a former farmland and meadow, to expand upon and create today’s 86-acre Meadow Garden, a habitat that serves a variety of native flora and fauna. Accessible paths, hiking trails, and views welcome guests to explore many habitats within the Meadow Garden from wetlands and forests’ edge to open fields of native wildflowers and grasses. As part of the expansion project, Longwood engaged with John Milner Architects of Chadds Ford, PA to lead the selective restoration of the farmhouse that punctuates the western view of the Meadow Garden landscape.  Milner and his team of preservation experts restored the exterior to reflect its appearance at the end of the 18th century after the western addition. The first floor of the interior of the house was adapted to serve as gallery space for interpreting the Meadow Garden.

Today, the story of the house and of the land continues to grow. Longwood’s commitment to conservation and stewardship of our lands, waters, and wildlife will ensure the Meadow Garden will continue to thrive … and enable our guests to connect with the land. The Webb Farmhouse & Galleries is one locale here in our Gardens where guests can engage in the exploration of this land’s history and the people that came before us. We invite you to walk (or hike!) through miles of lush wildflowers and grasses to the Webb Farmhouse & Galleries and come learn with us.