Longwood Gardens Receives Transformative Promised Bequest from The Kennett Collection, the Finest Private Collection of Bonsai Outside of Asia 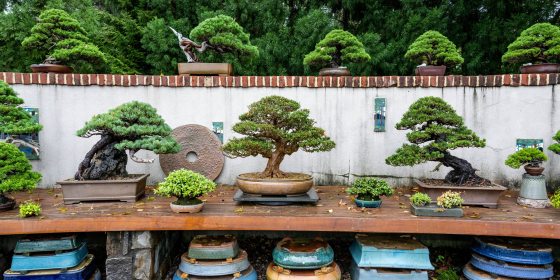 KENNETT SQUARE, PA—Longwood Gardens today announced that Doug Paul, the founder of The Kennett Collection—the finest and largest private collection of bonsai and bonsai-related objects outside of Asia—has made a transformative gift and bequest. Received in two parts, an initial gift will include 50 bonsai given to Longwood over the course of the next two years, as well as a yearly cash gift to support their maintenance. The second part of the gift is a bequest, which will gift 100 additional specimens—including kicho bonsai or Important Bonsai Masterpieces because of their beauty or rarity—and $1M for an endowment for the continued care of the collection, as well as additional acquisitions. The bequest will more than double the size of Longwood’s collection. Most significantly, it will add important examples of rare Japanese tree species, making Longwood the leading collection of bonsai trained in Japan on public view in the United States.

“These important bonsai trees, which have been so lovingly and carefully trained, will elevate Longwood’s collection to one of the most significant in the country,” said Paul B. Redman, President and Chief Executive Officer of Longwood Gardens. “The initial 50 specimens will expand the breadth and depth of our existing collection of 78 bonsai, best known for the diversity of our flowering species and for four notable trees developed by artist Yuri Yoshimura. We are extraordinarily grateful to Doug Paul for this transformative gift and the faith he shows in our bonsai program by entrusting us with these important living works of art.”

The Kennett Collection, which was started in 1999, now comprises 1,200 specimens that span the spectrum of bonsai in terms of sizes, styles, and species. The world’s leading bonsai experts have tended to the collection, which is also notable for the number of trees that have been invited for display in the Kokufu Bonsai Exhibition and the number of trees that are “Registered Masterpiece Bonsai” by the Nippon Bonsai Association.

The initial 50 trees that will enter the Longwood Collection over the next two years are especially notable for their lineage, including examples from many of Japan’s most famous nurseries, including the Chinsho-en nursery run by the Nakanishi family in Takamatsu, as well as from world-renowned bonsai artists, including Kimura Masahiko, who is known as “The Magician;” Suzuki Shinji of Japan; and Suthin Sukosolvisit of Boston. The gift will also include breathtaking Omono or “Very Large” bonsai, measuring three to four feet in height and weighing a few hundred pounds each.

Seven of these bonsai will go on view immediately in Longwood’s Conservatory, where they will be on view until November 13, 2022. Particularly notable specimens include:

“I am delighted to give specimens from The Kennett Collection to Longwood,” said donor Doug Paul. “I have spent many happy years stewarding these bonsai and sharing them with other bonsai connoisseurs at the Kokufu exhibition—the Westminster dog show of the bonsai world. I am now looking forward to a wider public getting to enjoy their beauty and splendor at Longwood.”

“Mr. Paul has been able to do what nobody else has done in the U.S. and that is to import, maintain, and improve specimens from Japan of the highest quality,” said Peter Warren, the U.K.’s leading bonsai professional. “Once The Kennett Collection trees are situated at Longwood, it will be without doubt one of the top three collections in the U.S. All of the trees in the collection have a unique and prestigious place in bonsai history, many spanning generations.”

The gift will also include bonsai-related objects, notably the containers in which the bonsai are trained. In the initial gift of 50 bonsai, there are notable examples by American bonsai ceramists Sara Rayner and Nick Lenz, who was also a celebrated bonsai artist. Together, the bonsai and the containers form a harmonious tableau.

The majority of the 50 bonsai from The Kennett Collection gift will go on long-term view during the grand opening of Longwood Reimagined in late 2024, a sweeping yet deeply sensitive transformation of 17 acres of the Gardens’ central visitor area. As part of this expansion, a new outdoor Bonsai Courtyard will be built alongside the new West Conservatory. Hedges and charred wood walls will create an intimate, gallery-like space, where dozens of bonsai will be displayed on free-standing pedestals against dark backdrops that highlight their forms, foliage, and seasonal bloom.

The gift is one of the most comprehensive and generous Longwood has received as part of the Gardens’ Pierre S. and Alice du Pont Founder’s Circle, which recognizes and honors individuals who make the thoughtful decision to include Longwood Gardens as part of their estate plans.

The Bonsai Collection at Longwood Gardens began in 1959, five years after founder Pierre S. du Pont’s death. Inspired by a Continuing Education program led by renowned bonsai artist Yuji Yoshimura, Longwood leadership decided to begin to build a collection. Over time, this collection evolved into one of the best assemblages of bonsai in the country.

Starting with 13 trees purchased from Yoshimura, the collection has now grown to 78 trees with 50 species represented. Longwood’s collection is notable for the prominence of flora from its local landscape. The oldest trees in the collection have been in training for more than 110 years. Nine styles are represented, including upright, informal upright, cascade, raft, forest, root over rock, broom, slant, and literati.

Longwood also has additional strengths in tropical trees, eight of which were added in 2021 and include notable examples of a Tiger Bark Fig, Ficus retusa, with aerial roots; a Vietnamese Blue Bell Tree, Trifidacanthus unifoliolatus, with fragrant purple flowers; and a Desert Rose, Adenium obesum, an African succulent with pink bi-colored flowers. The Collection also has a small, but significant group of eight Japanese imports.

About The Kennett Collection

The Kennett Collection, located in Kennett Square, Pennsylvania, is the finest single collection of bonsai and bonsai related objects in the Western world. Formed in 1999, the Collection includes more than 1,200 specimen trees with examples of the entire spectrum of bonsai in terms of sizes, styles, and species within U.S. import restrictions. More than 30 of the Collection’s bonsai have been featured in the Kokufu Bonsai Exhibition, held each February in Tokyo, and which is the pinnacle display of the bonsai world. Specimens from The Kennett Collection have been selected for ten consecutive years—no other collection of bonsai outside of Japan has been singled out this way. A number of trees have also been designated “Registered Masterpiece Bonsai” by the Nippon Bonsai Association.

In addition to the impressive number of trees is the even larger number of ceramic containers acquired from around the globe. One of the more interesting features of The Kennett Collection is the unique combination of masterpiece Japanese bonsai with the finest western bonsai ceramics, creating an entirely different aesthetic.

Since the inception of the collection, guidance and advice has always been obtained from the leading professionals. World renowned bonsai professionals visit the collection several times each year to maintain the trees to the highest level. All of the current professionals have undergone a traditional Japanese apprenticeship and are internationally renowned.

Longwood Reimagined: A New Garden Experience will expand the public spaces of the renowned central grounds and connect them from east to west, offering a newly unified but continually varied journey from lush formal gardens to views over the open meadows of Pennsylvania’s Brandywine Valley. The project originates from a master plan developed in 2010 by West 8 Urban Design & Landscape Architecture with WEISS/MANFREDI Architecture/Landscape/Urbanism. Longwood has continued working with WEISS/MANFREDI as lead designer, in collaboration with Reed Hilderbrand, on Longwood Reimagined, which continues the institution’s distinguished history of commissioning and collecting outstanding garden designs and glass houses. The project is managed by Bancroft Construction Company, based in Wilmington, Delaware.

In keeping with Longwood’s tradition of creating beautiful environments that feature fountains and horticultural displays, the centerpiece and largest single element of Longwood Reimagined is the creation of a new 32,000-square-foot glass house, designed by WEISS/MANFREDI, with gardens and pools designed by Reed Hilderbrand. Longwood’s Cascade Garden, the only design in North America by the great Brazilian landscape architect Roberto Burle Marx, is being relocated in its totality to an all-new, 3,800-square-foot glass house of its own, a jewel box where the tropical plantings will be preserved and can thrive at the heart of the conservatory ensemble. A new outdoor Bonsai Courtyard, built alongside the West Conservatory, will exhibit one of the most outstanding collections of bonsai in the country. Other elements of the Longwood Reimagined project include construction of a new education and administration building with a state-of-the-art library and classrooms; renewal of the beloved Waterlily Court designed by Sir Peter Shepheard (1913-2002); and preservation of six historic Lord & Burnham glass houses from the early 20th century, to be relocated at a later date and used for year-round garden displays.

About the Pierre S. and Alice du Pont Founder’s Circle

Founded in 2021, the Pierre S. and Alice du Pont Founder’s Circle recognizes and honors individuals who make the thoughtful decision to include Longwood Gardens as part of their estate plans. As patrons of the arts and education, Pierre S. and Alice du Pont wanted to ensure that institutions that provided immense pleasure and benefit to the community would be carefully preserved for future enjoyment and societal impact. With their exceptional foresight, they made provisions for Longwood Gardens and other charities important to them in their estate plans.

In 1906, industrialist Pierre S. du Pont (1870-1954) purchased a small farm near Kennett Square, PA, to save a collection of historic trees from being sold for lumber. Today, Longwood Gardens is one of the world’s great horticultural displays, encompassing 1,100 acres of dazzling gardens, woodlands, meadows, fountains, a 10,010-pipe Aeolian organ, and grand conservatory. Longwood Gardens is the living legacy of Pierre S. du Pont, bringing joy and inspiration to everyone through the beauty of nature, conservation, and learning. Open daily, Longwood is one of more than 30 gardens in the Philadelphia region known as America’s Garden Capital.