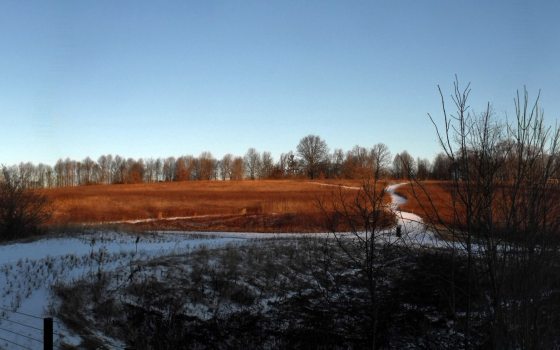 Flurries of Activity in our Meadow Garden

"So, what's going on in the Meadow these days?" I've heard this question a lot recently, and it's easy to see why. Looking out over its frigid expanse, I sometimes feel like the entire Garden is in a suspended animation until warmer weather. But, while the Meadow Garden has been icy, it's hardly been put on ice! There's actually quite a lot going on with the Meadow and its residents if you know where to look. Those who are willing to brave the elements and seek out life in the snow will be rewarded with a glimpse of how our native plants and animals adapt—and thrive—in the winter landscape.

One of the most visible effects of winter on the Meadow is that everything looks dead. The stems of dry grasses and desiccated wildflowers sway in the wind, and the trees are bare. Well, at least most of them. But why is that? While much of the Mid-Atlantic is dominated by deciduous trees, winter is truly the evergreens' time to shine. Evergreen conifers will continue to photosynthesize all winter long, thanks to their narrow needles that are less vulnerable to water loss (due to their smaller surface area). Deciduous trees, having generally broader leaves, lose water more rapidly—a big liability in winter weather, when cold winds and weak light make photosynthesis much less profitable. Deciduous trees therefore opt to abandon it entirely, dropping their leaves until favorable conditions in spring make it worthwhile to photosynthesize again. The vibrant colors of fall are in fact a signal of this retreat, as energy production begins to shut down and valuable nutrients are withdrawn into the tree in preparation for leaf drop (or abscission). This movement of nutrients is especially important given that broad-leaved trees have difficulty transporting water and other materials during this time, as their internal "plumbing" starts to freeze up. Coniferous evergreens, on the other hand, have special adaptations that allow them to re-route water flow around blockages, making them less susceptible to the effects of freezing.

Despite these measures, freezing temperatures and water loss continue to be major issues for deciduous and evergreen plants alike during the winter. As living organisms, trees and all other plants need liquid water to survive regardless of whether they are dormant or photosynthesizing. But fortunately, even in the depths of winter, there is always one place where warmth and liquid water can still be found: underground. While the topsoil freezes solid, the earth's internal heat will keep the subsoil warm enough to sustain life all winter long beneath an insulating blanket of frost. What may look (and usually is) dead on the surface is actually alive and well underground. Herbaceous meadow plants store their energy in deep root systems (between 6 and 12 feet) from which they will resprout the following year. Above ground, their dead leaves and stems provide valuable food and habitat for many animals.

Few gardeners would ever dream of planting a field in winter, but breaking frozen ground is no challenge to Mother Nature. The same forces that make the ground rock hard can also break it apart as moisture in the soil freezes and expands. Needle-like ice crystals will create cracks and furrows in the earth's surface as they grow, allowing any seeds that fall into them to be effectively buried when the ground thaws and collapses. This same process—known as frost heave—also plays an important role in keeping the soil well-mixed, putting important minerals and nutrients into the reach of plant root systems.

Whereas the Meadow may appear to us as a desolate field in winter, birds in particular see it as a veritable seed buffet. Throughout the winter, the Meadow is alive with feasting birds who will help spread these seeds far and wide. For migrating birds in particular, meadows like ours serve as important rest stops where they can re-fuel on their long journey south. This is one of the many reasons that we always leave the entire Meadow Garden standing for the winter, mowing it only in late March or early April to leave last season's vegetation standing for as long as we can. This timing allows us to clear off the dead vegetation right before the start of the next growing season, providing resprouting plants with growing room and sunlight while minimizing our impact on overwintering animals.

Even so, we will typically mow between one-half and two-thirds of the Meadow in any given year in order to better mimic the effects of fire and grazing. Mowing is an effective substitute for these natural processes that are necessary to sustain meadows in our region. Without periodic disturbance, the Meadow would be gradually taken over (or ecologically "succeeded") by woody plants. By preventing this succession, we can maintain the structure of our Meadow Garden and give native wildflowers and grasses more space to grow.

Though it may look deserted, there's another important reason why we don't mow the Meadow during winter: because nearly all of its summer residents—with the exception of migratory species like the tree swallow and the monarch butterfly—are still here! While some, like chipmunks and groundhogs, will hibernate in underground dens, many will be variably active throughout the winter. Eastern gray squirrels spend the coldest parts of the winter ensconced in leafy nests (called "dreys") in tree branches or hollow cavities, venturing out to feed on buried nuts and seeds when the weather permits. Others, like the red fox, are active all winter long. Foxes will spend the coldest months of the year excavating their many dens (each pair will have several) in preparation for the birth of new kits in the spring.

While red foxes are capable diggers, they are also thrifty, and will readily appropriate abandoned groundhog holes whenever possible. Visitors to Longwood can see the footprints of our many resident foxes patrolling the paths (and boardwalks) of the Meadow Garden in search of their favorite food: the meadow vole. This prolific rodent is also highly active during the winter, and can sometimes reach population densities of several hundred per acre under optimal conditions. Masters of the subnivean world (from the Latin "sub nives," or "under the snow"), their teeming multitudes will beat a network of little highways (or runways) into the grass that can be seen clearly as the snow melts.

Here, protected from the cold by the incredible insulating power of snow, meadow voles will feast on the exposed back of woody plants as well as any seeds, tubers, roots, and other vegetation that they can find. They are the favorite food of many of the Meadow's predators, including raptors (such as the red-tailed hawk and the northern harrier), foxes, and owls. While seldom seen, the tracks and trails of these secretive winter residents can be seen throughout the Meadow—and often cover its paths within minutes of a fresh snowfall.

But what about the Meadow's insects? While they're decidedly less active during winter than warm-blooded birds and mammals, many dormant insects actually hide in plain sight. For example, visitors to the Meadow Garden will almost always be able to spot strange ball-like growths on the stems of Canada goldenrod. These harmless "apple galls" are actually the home of the goldenrod gallfly, which lays its eggs inside the stem of goldenrod plants. Upon hatching, the larval fly will immediately begin chewing a hole for itself, inducing tissue growth in the stem with its hormone-laden saliva. The gallfly larva will spend a full year inside its purposeful home, protected from the elements, but vulnerable to birds, wasps, and other predators. Other insects, including many moths and butterflies, take a more active role in constructing their winter shelters, spinning silken cocoons, or burrowing beneath the ground.

Some, including mayflies, dragonflies, and other aquatic macro-invertebrates (those that do not migrate, that is) will overwinter as nymphs in streams and ponds. A few insect species, however, can still be seen crawling and flying on warmer days—including the mourning cloak butterfly (which overwinters as an adult in hollow trees) and the banded woolly bear (which is the larval stage of the Isabella tiger moth). All of these overwintering insects, regardless of what life stage they are in, constitute an important food source for other meadow creatures throughout the winter.

As you explore the Meadow Garden this winter, keep a sharp eye out for these and other signs of life. The strategies used by the Meadow’s resident plants and animals to cope with winter weather are many and varied. While this post merely scratches the surface, it should give you some interesting things to look for and think about as you explore the Meadow’s winter landscape. For those interested in learning more about how our native plants and animals deal with winter, I highly recommend checking out a copy of Bernd Heinrich’s Winter World: The Ingenuity of Animal Survival, which can be found at your local library. We also keep a copy of this excellent book in the Webb Farmhouse for all intrepid winter explorers to enjoy.