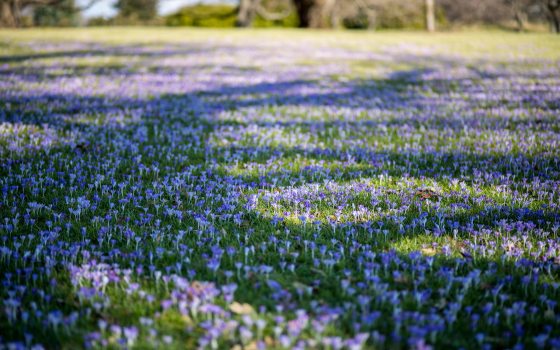 As February transitions into March, those of us in Southeastern Pennsylvania are looking everywhere for signs of spring. This year, the grounds of Longwood Gardens are providing a half million new reminders that spring is just around the corner. Last fall, our gardeners, students, and volunteers completed a massive effort to add 500,000 early spring bulbs to the landscape, and these bulbs are beginning to bloom now!

During the 1980s and ‘90s, our staff members (including a group of graduate students) established plantings of blue squill (Scilla siberica) and glory-of-the-snow (Chionodoxa forbesii) on the Oak & Conifer Knoll in the southwest corner of the Gardens. These early spring bulbs kick off the outdoor blooming season and provide carpets of color across our lawns every year. However, even the best ideas require re-visiting after more than 20 years.

In early 2015, Head Gardener Ed Broadbent, along with Gardeners Jess Whitehead and Sam Hoadley, and Senior Gardeners Mark Mosinski and Kari Getchonis, reconvened the geophyte committee, which was first formed in the ‘90s. After a thorough assessment, the team moved ahead with a new plan for the bulb naturalization project started a generation ago. “We already had a hardy bulb presence,” says Jess. “As the years go by, some things survive, some things don’t, and so it evolves and changes. This was a tune-up.”

The tricky part about this project was timing: Jess and the rest of the team had to wait for the current bulbs to bloom last spring, in order to note their exact location. The team then took detailed pictures of the landscape in bloom and transferred this information to CAD-generated maps. From there, Jess collaborated with Sam to identify and sketch out the spaces in need of revision.

Planting would not take place until fall 2015, and the team had to check off countless other decisions and tasks before the first bulb went in. First, the gardeners had to narrow down what to plant in the landscape, which included factors like animal repellant bulbs as well as the timing of the blooms themselves. “We selected Narcissus ‘Tete-a-tete’ because that was going to bloom early in February or March,” says Ed. “We wanted these to coincide with the existing bulb display on Oak Knoll. Plus, we wanted this early presence in the landscape before the Idea Garden, Flower Garden Walk, or the Visitor Center was in bloom.” In this way, the revisions to this grand space advance the original idea to extend the spring season.

The team also needed time to consider and source the tools that would allow for both the most efficient work and the protection of the well-established trees and plants that dominate the space. Sam spent significant time sourcing the highest quality manual tools for planting the daffodil bulbs. While the landscape is sprawling in this part of the Gardens, electric tools and tractor attachments have too many drawbacks to justify their efficiency. Every bulb would have to be planted by hand—not only to achieve a random, natural look, but also to protect the trees.

When October arrived, the gardening team finally executed its plans. Turf paint translated the paper plans to the landscape—demarcating the general areas that would receive new bulbs and delineating paths for guests to walk. “We tried to leave voids where guests can walk up to and through the plantings without actually walking over the bulbs,” says Broadbent. Over the course of five weeks, a huge team of staff members, students, and volunteers—including volunteers from local corporate groups—invested 1,700 hours of combined labor to plant 500,000 bulbs in Oak & Conifer Knoll. This does not include the additional two weeks of labor that planted 250,000 bulbs in the formal displays such as Flower Garden Walk.

From beginning to end, this undertaking required strict attention to detail. The irony of designing a “natural” or “random” planting scheme outdoors is that the planting itself cannot be performed randomly or haphazardly. Ideally, the bulbs should appear as a reaction to the trees and landscape already present and give the impression that they have always naturally been part of the scene. “As a result, we had to have quality control every step of the way, adjusting as the work was being done” says Jess. Each worker would fill a basket with a random selection of the chosen bulbs, create a plug in the ground, drop in the bulbs, and then carefully replace the original plug. Gardeners supervised the placement of the bulbs to ensure that the revisions on the maps were executed on the ground. Much to the entire team’s relief, the weather generally cooperated throughout the entire process.

While the bulk of the work has been finished since the fall, the gardening team is still waiting to see the “final” results of what is still a work in progress. “We can’t judge by this first year what we really think of what’s there,” says Broadbent. “We might say, ‘You know, we’re a little thin in this area’ and then have to rethink a few spots.” Additionally, because of Oak & Conifer Knoll’s grand size it remains to be seen how the numerous microclimates in the space will affect what has been planted. Various components such as sun, shade, topography, and drainage will determine which spots allow the most bulbs to thrive. “Make the best plans you can and then know that nature is going to do whatever it wants anyway,” laughs Jess. “We did our best to make sure that everything has the best chance of making it in all parts of this area, so the idea is that the vast majority of the new bulbs are going to do great.”

To go along with the new Narcissus ‘Tete-a-tete’ bulbs, winter-aconite (Eranthis hyemalis) provides additional early spring color. “We have a local garden that allows us to collect winter-aconite seed,” says Broadbent. “The seed is collected in the spring, dried out at Longwood, and then dispersed into the landscape. In five to seven years, these seeds will produce a flowering plant.” While this could be achieved in less time by securing and planting tubers, Broadbent has learned from past failures with tubers that seeds will more reliably provide these plants with their tiny yellow blossoms.

Additionally, the team is considering fall-blooming crocus to extend summer colors in Oak & Conifer Knoll. The only question that remains is how many they should plant. Broadbent quickly ticks off the reasons for working on a grand scale: “It wouldn’t be too difficult to inexpensively secure 30,000 bulbs and get them planted in a day. Then I start thinking, ‘Well, maybe we can do 60,000 or 90,000?’ because I’m inspired by how quickly all of this other work was carried out. It becomes too easy to multiply these numbers.”

So many of Longwood’s displays are temporary, coming into bloom and being replaced with new plants as they fade. Ed and Jess both reflected on the pros and cons of creating something that returns regularly on its own. “It’s very rewarding because it’s a permanent display,” says Broadbent. “It’s going to keep maturing and getting better. The crew goes through so much trouble for the Flower Garden Walk and the Idea Garden and those displays come into bloom for a short period of time and then are redone again and again as the seasons progress.”

Perhaps one of the virtues of a more seasonal project is, in fact, its ephemeral nature: if it doesn’t turn out as expected, the team is already prepared to go back to the drawing board next year. “It’s also that much more pressure because you know it’s permanent,” says Whitehead. Guests can check out the new plantings in bloom on Oak & Conifer Knoll now, and each year in early spring for many springtimes to come.