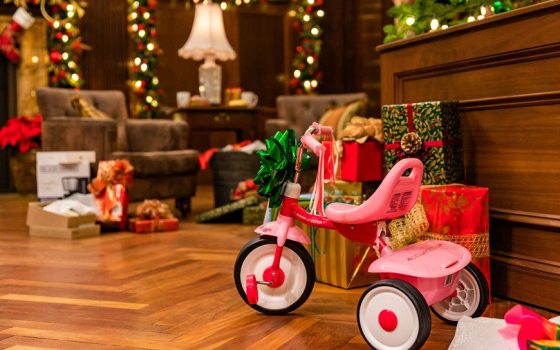 Home for the Holidays

Longwood Gardens has been a treasured home for the holidays for generations of guests since our first Christmas display in 1957, each year providing an unforgettable experience of sparkling beauty and good cheer. While the Conservatory is currently closed, A Longwood Christmas again this year has vibrantly decorated trees and hundreds of thousands of twinkling lights to inspire a joyful holiday mood and warm the hearts of all who visit. Our Christmas display is one rooted not only in beauty, but also in a spirit of giving that has resonated here at Longwood for the last century … and, to us, that spirit can be warmly felt in each lovingly placed ornament and each impeccably grown flower showcased throughout this year’s display.

Longwood founders Pierre S. and Alice du Pont truly exemplified the spirit of giving throughout the year, but particularly during the Christmas season. From 1921 through 1942, the du Ponts hosted an annual lavish Christmas party known as “the Christmas Tree” in the Conservatory for Longwood employees and their families, as well as a separate party most years for senior citizens from nearby Wilmington, Delaware.

They were also thoughtful and generous philanthropists throughout their lifetimes, donating more than a billion dollars (almost 3 billion in today’s dollars) in addition to their valuable time to help advance important causes like education and public health.  Mr. du Pont wrote of his philanthropy in a 1922 letter: “I wonder why so many people hang on to their fortune and property instead of having fun watching the distribution process themselves. I have had much more satisfaction in planning for roads, schools, and hospitals, etc. than in continuing the piling up process.” Of course, Pierre du Pont’s thoughtful planning also ensured that his beloved Longwood Gardens would carry on for future generations to visit and make cherished memories.

In the book Longwood Gardens Christmas by P.S. du Pont Fellow Colvin Randall, Mr. du Pont’s great-nephew Nathan Hayward III describes his uncle and aunt as personifying an “essence of gentle goodness … [We] can only imagine what it was like when a kindly gentleman and his elegant first lady would escape from the formality of a three-piece suit or fur stole, embrace some small child, and like Santa and his Mrs., wish them the merriest of Christmases.”

According to the former children of Longwood, the du Ponts (who had no children of their own) always made the Christmas Tree a memorably magical time for them. They each received their own printed invitation, and on the day of the party—after being greeted individually by Mr. and Mrs. du Pont—were invited to fill a shopping bag with small gifts tied to the lower tree branches. Each child also received two larger gifts chosen just for them, followed by an entertaining vaudeville show, sweet refreshments, and distribution of colorful helium balloons.

When Pierre du Pont opened the Conservatory in 1921, one of its primary uses was as a place for grand entertainment of family, friends, and community members, including the annual Christmas parties. The Music Room, built adjoining the north end of the Exhibition Hall in 1923, was a place for the du Ponts to host more intimate gatherings. A Steinway concert grand piano was kept there, and the console for Longwood’s first organ was housed in the Music Room before its future home in the Ballroom was constructed. While the Conservatory is currently closed, this year’s Music Room Christmas display embodies both the excitement of the du Pont’s Christmas Tree celebrations, and the intimacy of a warm family holiday gathering.

Senior Horticulturist April Bevans designed the Music Room display to create a traditional Christmas morning moment in time. She and her team of hard-working elves delivered the epitome of colorful Christmas nostalgia, with overflowing stockings hung on the fireplace mantel; an 18-foot tall Fraser fir (Abies fraseri) festively decorated in red, yellow and gold; and beautifully wrapped presents. Musical instruments large and small are tucked throughout the room to remind us of the room’s history.

A lovely quote about Mr. du Pont was written in 1925 letter by a Longwood garden party attendee (the quote appears in Longwood Gardens Christmas): “It is one of the great truths that unfortunately most men do not realize in early life that the true pleasure one gets out of living is giving pleasure to others.” Pierre and Alice du Pont seemingly lived by these words, and generations have benefitted from their generosity. A Longwood Christmas continues that tradition of giving pleasure, and it is our sincerest wish that you are warmed and inspired by the beauty and tradition that Pierre and Alice du Pont created.