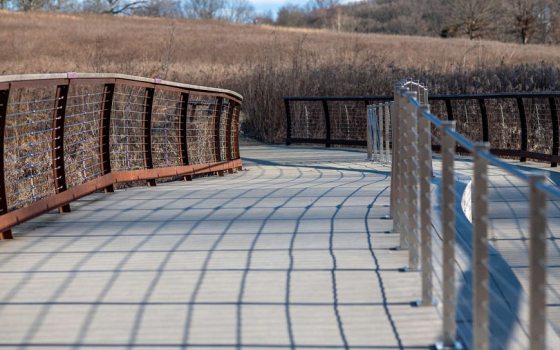 Telling the Inside Story

At a time in which we find ourselves connected to—quite fortunately—one another via wireless technology, it may be hard to remember that we, as human beings, are wired for storytelling and for time spent in nature. Through the powerful exhibition Voices in the Landscape: Deeply Rooted with Storyteller Charlotte Blake Alston, on view both on-site at Longwood and online January 23 through March 21, nationally acclaimed narrator, singer, and librettist Charlotte Blake Alston is looking to bring our connection to storytelling and nature to light as she honors the strength, resilience, and contributions of the African American community through the lens of horticulture and the power of story. Alston’s own story is an incredible one, as are her messages and her voice … which—quite fortunately—resonate with you long after experiencing the exhibition amid the beauty of the Longwood winter landscape.

Raised in Philadelphia, Alston is a highly sought-after storyteller committed to perpetuating the African And African American oral storytelling traditions. Her work and her passion have led to her perform in schools, universities, museums, and concert venues around the world and for such events as the historic weekend opening of the National Museum of African American History and Culture in Washington, DC to both presidential and gubernatorial inaugural festivities. Prior to her artistic career, Alston was an early childhood educator, which has undoubtedly inspired her in present career. While she found her springboard to her current endeavors during her time as a classroom educator, the seed of her storytelling work was planted long before.

“We grew up in a music household,” shares Alston as she recounts her mother’s role as a church organist and that she and her four siblings all began piano lessons around the age of six or seven, soon after each learned how to read. In fact, of all her siblings, Alston was the only one who did not pursue a course of studies in music. “We did family programs and we sang, even thought my father couldn’t carry a tune from the living room to the dining room,” she shares. “My father was a mailman to earn his living, and he literally and figuratively carried a wife and five kids on his back. But he was the one who had a passion for language, for writing, and he would always carve out time for himself to write.”

Alston reflects on sneaking up to her parents’ room to quietly sit by her father’s side as he wrote: “After a while he would start reading aloud what he was reading, which was a lot of works by Black authors and poets. Somewhere around age six or seven he handed me the complete poems of African American poet Paul Laurence Dunbar. He selected a poem for me to read and I read it over and over … when I looked at the writing, I had no difficulty reading it,” shares Alston. “In my head, as a kid, I heard the melody and the rhythm and the articulation pattern of my great aunts and uncles from Virginia. So I read this poem over and over and memorized it, and I think when he saw how quickly I memorized it, a lightbulb went on, and he started writing little comedic monologues for me.” From there, Alston found herself at age seven performing on the “church banquet and tea circuit,” standing in front of audiences and recounting the poems and monologues her father wrote for her.

After graduating college, Alston went on to teach. One day during her first year teaching at Friends Select School in Philadelphia, she found herself on stage, dramatizing a skit her kindergarteners would soon be performing in preparation for an upcoming assembly … and found herself surprised by her colleagues’ reaction to her impromptu performance. From there, the head of the school started sharing with other heads of schools about Alston’s penchant for storytelling and Alston found herself on stage at schools throughout the area. Through word of mouth, she was invited to perform some sets at the Philadelphia Museum of Art and from there, word of her talents continued to spread. “That one year, there was this increasingly intense internal restlessness, shares Charlotte. “I was 41 and it hit me I had probably lived over half my life and what did I want to do with the rest of it. Longevity is not guaranteed. Health is not guaranteed. I thought about what I wanted to do with this interest, this ability I have, this leaning towards stories and telling the arts.”

Upon her realization, Alston decided to step away from teaching, giving herself two years to launch her artistic career and thinking “the worst that could possibly happen was that it wouldn’t work, and that’s really not so bad.” Thankfully, it did work. Today, from her work as host and narrator of The Philadelphia Orchestra’s school and family concerts since 1991 to her many and varied international appearances, Alston finds herself on a multitude of stages in front of a multitude of audiences. Voices in the Landscape serves as her first sound installation … and one we are delighted and honored to share.

Through a series of 10 stops—which can be experienced in-person throughout the Gardens or virtually from home—Voices in the Landscape is a powerful journey and a poignant look at the strength and contributions of the African American community. At each stop, guests in the Gardens can listen to Alston’s words via their phones and be transported with her tales of hope, of resilience, of immeasurable impact. Those experiencing the exhibition online at home can surround themselves in Alston’s words and can enjoy a bonus stop available only online.

While in the Gardens or during the online experience, guests are encouraged to lean into the story of the significance and symbolism of woods and meadows at the Lookout Loft Treehouse. Along the Meadow Boardwalk, take a quiet stroll with Frederick Douglass on the grounds of his property at Cedar Hill, where he would restore his body and spirit among its flowers and trees. In the Conservatory, reflect on the amazing life and work of George Washington Carver and hear an ancient Zulu creation story paired with the oldest plant on Earth—the Wood’s cycad—among other poignant locations and stories.

“I was so inspired by the Wood’s cycad,” shares Alston. “When I walked the Gardens, I stopped at this prehistoric plant and wanted to know its story. A plant that’s been on Earth for thousands of years is named ‘Wood’s cycad.’ The name Wood sounds Anglo to me, so I wondered what might its name have been before Wood ‘discovered’ it … that began to run in my head and the fact that it was uprooted from its original home and traveled across the ocean to these shores. I made a correlation between the backstory of the plant before its discovery and the story of African people … how we had identities before we went into the hull of a ship.”

Throughout the journey, Alston’s voice and talent beautifully shine and resonate, with stories in part inspired by Longwood that also transport us to places far beyond. “We talk in stories. We are wired as communicators to connect with one another,” shares Alston. “What I find with storytelling regardless of its ethnic origins is storytelling speaks to our hearts, our spirits, our souls as human beings. It reminds us of our commonalities within the diversity that is the human family.”