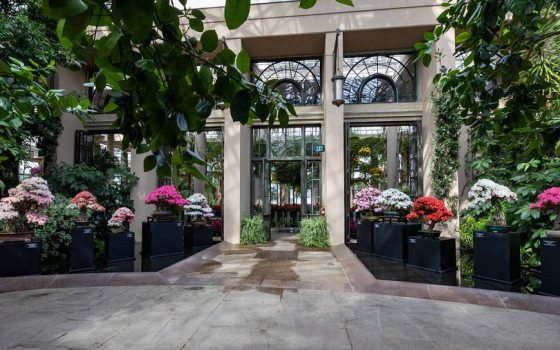 Bonsai is an art form steeped in patience and contemplation, but it’s also a practice rooted in opportunity for engagement and interaction. The true goal of bonsai is nurturing and training a tree in a container to appear as it would in nature … making the way in which the tree interacts with its surroundings paramount in its ultimate expression. To that same end, we want our guests to have the chance to interact and engage with our bonsai … including the 10 stunning azalea bonsai trees with cloud-like, vibrant flowers we’ve just now put on display in our East Conservatory, as part of a new rotating bonsai display. We want our guests to see their beauty and gestures from every angle, to step back and notice how they relate to their surroundings, and to—most of all—have fun discovering the big impact of our tiny trees.

As part of Longwood Reimagined: A New Garden Experience, we’re creating a new outdoor Bonsai Courtyard that will not only showcase our expansive bonsai collection, but also allow guests to engage and interact with our trees in a way they’ve never been able to before. In the new Bonsai Courtyard, trees will be artfully positioned along a series of paths and walkways, so guests will be able to view the trees from varying angles or sit on benches to rest and contemplate the bonsai around them … much like you’re able to do in a fine art museum.

While our bonsai are awaiting their new permanent display home and being cared for in our production greenhouse and nursery facilities, in the meantime we’re proudly showcasing a rotating display of our bonsai collection in our East Conservatory parterres, which enables us to share with you the beauty and diversity of our collection in entirely new surroundings. This park-like setting in the Patio of Oranges features permanent plantings of Mediterranean and sub-tropical flora, complemented by seasonal blooming plants. While the space does feature a soaring ceiling, it also offers intimate areas for quiet contemplation amid a gently flowing stream, waterfall, and two parterres … perfect for display of our bonsai.

Starting this month, we’ve placed a selection of five bonsai trees in each of the two parterres, set against a Fern Floor backdrop. The symmetry of placing five bonsai in each parterre grounds the space and creates a visual stability point with the framing of the Fern Floor behind them. This symmetrical display helps bring your eye downward towards the bonsai, even amid the soaring height of the Patio of Oranges ceiling. We’ve started our rotating display with 10 beautifully flowering azalea bonsai, selected for their variety of flower types, tree sizes, and tree styles to build out a dynamic composition that reflects the expansive world of Japanese Satsuki azalea hybrids. We anticipate having these azaleas on display for two to three weeks and will then continue to rotate new tree selections into the display.

Among the trees we’ve selected to kick off the display is our Kaho Satsuki azalea hybrid. Donated to Longwood in 2017, training on our Kaho Satsuki azalea hybrid began in 1968 by Kunio Kobayashi, a world-renowned Japanese bonsai artist and owner of Shunka-En Bonsai Museum in Japan. The azalea is approximately 75 years old and the tree is of the informal upright style, featuring large blooms with various white, pink, and red flowers. It’s also potted in a Sara Raynor pot, an established American bonsai potter. We selected this tree for display as it maintains its visual impact in a large space. The azalea species does well in a large range of lighting conditions and offers a range of seasonal interest with its evergreen foliage and beautiful flowers, which typically bloom in mid- to late May. What’s more, this tree serves as an excellent example of a traditional bonsai form in its proportions and stylization, including the taper of its thick to thin branches moving from the base of the tree to the apex, as well as the layout of its branch pads.

Also chosen for initial display is a Kinsai Satsuki azalea hybrid, on loan from The Kennett Collection and also trained by Kobayashi starting in 1970. Featuring firework-like blooms of red flowers, this azalea is about 50 years old is of the informal upright style and potted in a Terahata Mazan Japanese container. Its evergreen foliage and beautiful red flowers—which offer a nice contrast to the softer hues of our other azalea flowers—make a big impact.

You’ll also see our beautiful Sachi-no-Hana Satsuki azalea hybrid in our initial display. Also on loan from The Kennett Collection, the tree is potted in a container by European potter Isabelia, a kiln that makes handmade pottery on behalf of the Bonsaimuseum Isabelia in the Czech Republic. The tree’s training began around 1960 and it was acquired from Rockiju-en, a nursery in Kanuma City, Japan. At approximately 60 years old, the tree is of the informal upright, exposed root style; this form is created by growing the azalea’s roots in long tubes. During the growing months, the soil is removed in small increments to expose the roots. The roots then harden off and thicken and the same process is repeated over many years. This tree’s unique roots and scale offer much visual interest and showcase one of the unique growing techniques for bonsai.

Displaying a rotating selection of our bonsai in the East Conservatory allows for a different type of engagement than what was possible in our previous Bonsai Display space. In the former Bonsai Display, the bonsai could be viewed in a more linear, centralized space. In the Patio of Oranges, the lush, ever-changing surroundings allow for more vantage points of each tree, as well as more color and texture surrounding the bonsai, which will beautifully complement the rotating trees we display in the parterres. The lower light of the Patio of Oranges setting, when compared to the previous Bonsai Display conditions, can allow for more dramatic viewpoints and perhaps even prolong the flowering of some of our bonsai, particularly our azalea bonsai.

There’s much opportunity in showcasing our bonsai in our East Conservatory. I’m looking forward to seeing firsthand how elements of each tree—from the gesture of each branch to the vivid hues of flowering specimens—interact with their surroundings. Most of all, I’m looking forward to seeing how you, our guests, engage with the bonsai in this new space, experiencing them in a whole new way in the East Conservatory. We’ll be sharing a variety of bonsai in the parterres over the coming months, showcasing the diversity of our collection amid these beautiful surroundings.

Editor’s note:  Explore the fascinating world of bonsai with Kevin by registering for our new, fully online, self-paced Beginning Bonsai class. At your leisure, study the care and culture of bonsai, learn techniques for designing and maintaining these sculptured treasures, learn about the history of Longwood’s storied bonsai collection, and discover the tools of the trade for own bonsai success.