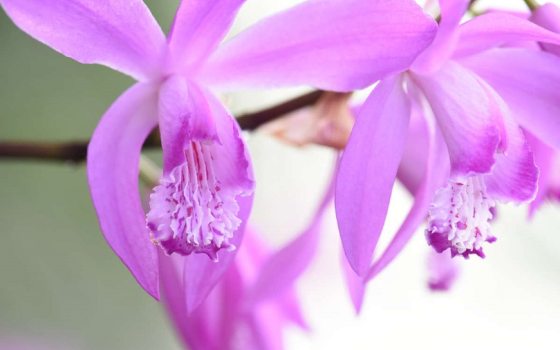 Guests visit Longwood to indulge themselves in the beauty created by the ever-changing, colorific displays of perfectly grown plants at the peak of their ornamental appeal. Although beauty is the primary reason why we grow many of the plants you see at the Gardens, in many instances the beauty of these plants go far beyond their looks. Some of our most beautiful plants have intricate botanical curiosities, associated anecdotes, and ethnobotanical importance that can often be overlooked, as these qualities can be difficult to share with the context of display. These stories vary from the expected to the unexpected and are best told through the lens of the variety of our plant collections here at Longwood, our plant exploration program, the places in which the plants originate, and the cultures they so beautifully impact.

The field of ethnobotany—the study of how a region’s plants are used by the local culture and people—is a fascinating topic and one that considers much more than a given plant’s aesthetic appeal. Orchids, for one, are a favorite plant group for many (including Longwood’s founder), and for good reason, given their gorgeous colors and rich variety—they’ve been a cornerstone of the displays and plant collections here at Longwood since the 1920s. The beauty of orchids, however, goes far beyond their appearance, as they also have extensive ethnobotanical and medicinal uses. Perhaps no other genus of plants is so valued for their ornament yet contributes so much to the realm of traditional medicine. Orchids feature prominently in traditional medicines from cultures around the world and are still used widely in Asia for this purpose. In China, hundreds of orchid species have been used medicinally to treat a range of ailments spanning from pain relief to healing, to headache, and more serious ailments such as rheumatism, epilepsy, and various chronic issues.

On a Longwood plant exploration trip to Cao Bang province in April 2019, we witnessed the scale of the demand for Dendrobium officinale, as plants harvested by local collectors in the surrounding jungles were stuffed into old rice bags and sold as medicine. Our Vietnamese hosts explained that much of the demand for these orchids was coming from China, where there has been extensive research to quantify and classify the medicinal properties of orchids. Such medicinal demands for orchids, along with habitat loss, and the collection of orchids for garden use and sales has led to many orchids—in Asia and around the world—becoming rare and, in some cases, critically endangered. As a result, many orchid species have become symbols for the importance of biodiversity conservation, as well as the subjects of intensive botanical and horticultural research the world over.

Through various research efforts in China, Japan, and other Asian countries, plant scientists have sought to create protocols for farming ethnobotanically important species and reducing the poaching of plants in the wild. In some cases, these protocols are already in motion. On a 2018 plant exploration trip to China, we saw cultivated fields of the well-known mid-Atlantic garden plant known as the “hardy orchid” (Bletilla striata), being farmed as a row crop in rural western Hubei Province. In China, this species is called Pe-chi, which translated into English means “white chicken leg” in reference to the similarity of in appearance of the swollen underground tubers to chicken legs. What is largely considered to be a garden novelty in the western world is often used as an eastern-world remedy for a wide range of ailments including wound healing, anti-inflammation, hematemesis, and many other ailments.

While we often might think of orchids as occurring only in the tropical regions of the world, orchids also grow here in the United States, with many in our very own backyard. There are at least 60 types of orchids native to Pennsylvania that are part of more than 220 species native to North America north of Mexico. Some of these orchids have large, showy flowers well-known to wildflower enthusiasts and, like many charismatic orchid species, have become symbols for local plant and habitat conservation.

Long before our present consideration of these orchids, these plants were known to various Native American cultures for their healing properties, as their fragrant roots have historically been used to treat headaches, flu, and other ailments. Such healing properties are primarily attributed to the moccasin flower, known scientifically as Cypripedium acaule, but are also attributed to other native North American Cypripedium species. However, it should be noted that populations of essentially all lady’s slipper orchid species in the United States and throughout the world are declining and thereby important conservation subjects; they should never be harvested from the wild.

Outside of the world of medicine and ornament, perhaps the most widely used orchid is vanilla. While there are many species of vanilla orchids, the vanilla spice comes from the dehydrated, fermented capsules of Vanilla planifolia and closely related species. Most cultivated V. planifolia today goes back to one single origin of the species from Papantla now in the state of Veracruz, Mexico, where the Totonac people gathered and produced vanilla harvested from the wild. Today, vanilla cultivation is spread throughout tropical regions of the world, with Madagascar serving as the largest producer of the spice worldwide. Vanilla is grown in Longwood’s orchid collection for its unique vining habit, extraordinary flowers, and as a tool to educate guests about the importance of orchids beyond their beauty.

Orchids are a fantastic, illustrative example of the ethnobotanical importance of plant species across the globe and in our backyards … but they’re just one example of how many plants influence and inform cultural practices throughout the world. For these plants, their beauty is not only in the eye of the beholder, but also in their practical, ethnobotanical, and cultural uses enjoyed by so many … making these plants truly iconic.