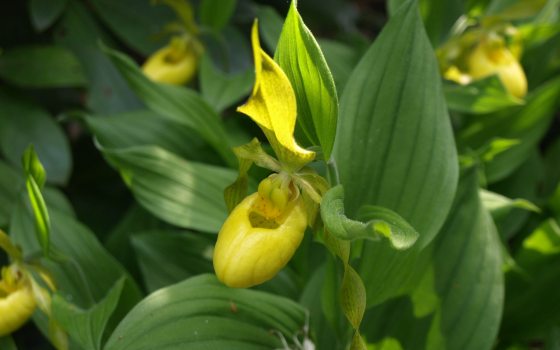 When you think of endangered species and conservation programs, you may think of our nation's zoos and aquariums and their work with wildlife preservation. Native flora may not come immediately to mind, but in Pennsylvania alone, the US Department of Agriculture lists almost 300 plants as endangered or threatened. Pennsylvania is home to nearly 60 species of native orchids. Some are among the showiest and most charismatic members of our native flora, but most are rare and threatened in the wild. Climate change, invasive species, habitat loss, and a booming white-tailed deer population have decimated many orchid populations in Southeastern Pennsylvania and across the region. To combat these issues, and to provide critical information about the propagation and growth of native orchids in cultivation, our Research Team at Longwood Gardens is developing a conservation program.

We are seeking to answer fundamental research questions, build a collection of plants to supplement our already world-renowned orchid collection, and engage in restoration efforts by providing seedlings back to the natural lands where the original seed was collected. As a starting point for this program, three different genera (groups) have been chosen: Cypripedium (lady’s slipper orchids), Platanthera (fringed or bog orchids), and Spiranthes (ladies’-tresses). Each group is rare for different reasons, presents unique propagation challenges, and flowers during different seasons.

Lady’s slipper orchids are among the most well-known and beloved of all native orchids and have some of the most recognizable flowers of all native plants. Formerly more abundant, but still rare in Southeastern Pennsylvania, the greater yellow lady’s slipper (Cypripedium parviflorum var. pubescens) has become very rare in Chester County and only two remaining populations still exist. Populations have suffered from habitat loss, an overabundance of white-tailed deer, and invasive species pressure. One of these populations, located at a Brandywine Conservancy property not far from Longwood Gardens, consists of only a handful of individual plants growing in an area heavily invaded by winged burning-bush (Euonymus alatus) and Asian bittersweet (Celastrus orbiculatus), and a large white-tailed deer population.

Given the precarious circumstances of these plants, we were granted permission to collect seeds from the site. Seems simple? Not at all! Propagation of native orchids is no trivial task. All orchids have dust-like seeds that have developed specialized relationships with mycorrhizal fungi. Mycorrhizal fungi are ubiquitous, ground-dwelling fungi that form associations with the roots of many plant species. In the wild, these fungi invade the orchid seed, enact seed germination, and supply the developing seedling with the energy it needs before the first leaves are produced and the plant can make its own food.

In cultivation, there are three methods for growing these orchids from seed, but we use two of them. The first is when the seed is harvested in an immature state, about 50 days after pollination. The developing capsule (the “fruit” of the orchid) is sterilized, cut open, and the seeds carefully removed and placed in test tubes containing nutrient-rich agar medium. By harvesting the seeds from the capsule early, some of the requirements needed to germinate are foregone and the seed continues to develop into a seedling. This is the preferred method, because the second method is even more difficult. For the second method of propagation, mature seeds are first treated with a weak bleach solution, and placed in vitro, or in test tubes, on a nutrient-rich agar medium. Despite being very small, the outer layers of orchid seeds are really tough, and this may inhibit seed germination.

Seed propagation protocols have been developed for our native lady’s slippers; however, each different plant population has a strong likelihood of reacting differently to a given protocol due to subtle differences in plant genetics. Therefore, seed samples from each population still undergo preliminary research to establish protocols for the specific population. So far we have been successful using both methods for propagation! We have seedlings growing, but will have to wait three to six years for the first flowers. If you want to see flowers before then, visit our Hillside Garden, where the greater yellow lady’s slipper has been growing since 1963, and comes into bloom every year in early May.

For some species, such as the purple fringeless orchid (Platanthera peramoena), only anecdotal reports of successful seed germination exist, suggesting that the seed has never been successfully germinated. We received permission to collect seed from the last-known remaining population of this species in Northern Delaware and are attempting to demystify the seed germination requirements by sowing the seeds in different media and subjecting them to varying temperatures. If we are successful, then we may have the chance to grow one of the showiest orchids in our native flora! This species blooms during the latter half of July, boasting robust spikes of soft purple flowers to nearly four feet tall. The flowers also attract various species of swallowtail butterflies. Like the greater yellow lady’s slipper, this species has become rare due to habitat loss, and white-tailed deer and invasive species pressure.

Case’s ladies’-tresses (Spiranthes casei) is one of the rarest Pennsylvania native orchids. Very little is known about seed germination requirements and cultural requirements, and this plant also happens to grow in a fracking region of North Central Pennsylvania where populations may be at risk. The species favors habitats of dry, sunny roadsides along remote forest roads, and have been impacted by roadwork for fracking operations. To help with the preservation of this species, we were contacted by the Pennsylvania Department of Conservation and Natural Resources Bureau of Forestry (PA DCNR).

In November 2015, we traveled to collect seeds from extant populations and were able to make multiple seed collections from different areas of the State Forest. We brought these back to our lab and have been experimenting with seed bleaching and medium requirements. These experiments have shed considerable light on the needs of this species and we have devised preliminary protocols for seed germination and in vitro growth of seedlings. This summer, we will attempt to transfer seedlings to the greenhouse and experiment to find the ideal potting mix, and, through work with one of our partners, reintroduce the necessary mycorrhizal fungus to these plants. If we are successful, we will give seedlings back to the forestry department for replanting at natural sites.

As you can see, conserving these important plant populations is complex and challenging. We are hopeful that our many efforts at native orchid conservation will continue to be successful. We want to play a role in the restoration of these important plants across the region, and also bring these rare gems to our Gardens to share their beauty with our guests.