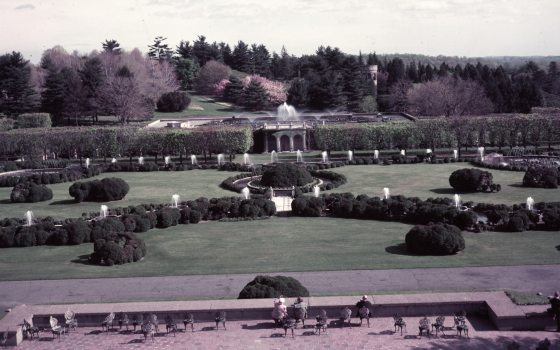 The pinnacle of Pierre S. du Pont’s love for gardening is set to reopen next summer to the delight of thousands of eager guests. Meticulous planning went into the revitalization of the Main Fountain Garden, with much consideration given to preserving the legacy of Mr. du Pont and the property he purchased in 1906. In addition to saving the arboretum that the Peirce brothers started in 1798, Pierre became the steward of a large collection of boxwood that was planted among the trees leading to the Peirce home.

Not only did Mr. du Pont care for the boxwood collection he inherited, he began to acquire boxwood specimens from the surrounding area, giving the Gardens an instant feel of maturity. His love for boxwood became well-known and enthusiastic homeowners were quick to boast about their top-quality specimens in numerous letters to Mr. du Pont. John Johnson, Longwood’s grounds superintendent for 47 years, illustrates this sentiment:

“I remember one time Mr. du Pont got a letter from a lady down in Millsboro, DE. She sent him measurements of her boxwood, and he sent me down to measure. He told me, if it was what she said it was, to buy it. It was what she said, so I bought the whole lot, and it was placed in summer around the garden, in front of the conservatory there, at the fountain basins.”

Plants came from as close as Kennett Square and as far away as North and South Carolina, but perhaps the largest and most coveted boxwood came from Lancaster County, PA, where it had been growing since 1720. Measuring 12 feet high and 80 feet in circumference, this massive specimen required the expertise of the Lewis & Valentine landscape company from New York, who specialized in moving large trees and shrubs. A tremendous feat for 1928, the relocation required the guise of night to avoid traffic, telephone wires to be removed, and tree limbs cut to accommodate the 13-foot-diameter rootball on its trek. The total cost of moving and planting this one boxwood was $8,250, or around $100,000 in today’s currency.

Once most of the boxwood was installed, Pierre used the outline of the boxwood hedges and larger specimens as a template for the fountains and supporting canals. Great care was taken to ensure the fountain infrastructure did not interfere with the boxwood, and French drains were installed to remove excess water. Because of the measures he took to acquire the most spectacular specimens, the amount of money he invested in their planting, and the care he took to preserve them, we can clearly understand the importance of this genus in Pierre’s garden designs.

To further cement his admiration for ordinary boxwood, Pierre’s travels to gardens like the Villa d’Este in 1913 validated boxwood as a building block of the Main Fountain Garden. Many classical European gardens use boxwood heavily in their designs and Pierre certainly noted the prominence of this plant during his extensive travels.

The undulating, billowing shape of the boxwood in Pierre’s Main Fountain Garden contrasted with the formal, French-inspired allées that gave structure to the design. Like eyeliner, boxwood accentuated the main features by adding softness around the fountain basins. In the revitalized Garden, we are restoring Pierre’s original vision by recreating the roundness and rolling aspects of the boxwood in contrast to the symmetry and straight lines created with allées of Tilia cordata ‘PNI 6025’ Greenspire®. Instead of defining the whole view, the boxwood force the observer to look into the “eyes” of the Main Fountain Garden.

In order to preserve the aesthetic of the original design, we had to address numerous horticultural issues. The first order of business was to thoroughly consider using boxwood rather than plants like Japanese holly (Ilex crenata) that were installed after a severe snowstorm decimated the prized boxwood specimens in 1958. The use of Japanese holly in the Main Fountain Garden was a temporary solution, and despite replicating the boxwood design elements, these plants lacked the heritage and history that boxwood provided. To continue that tradition, a team of horticulturists and engineers came up with solutions for soil compaction and fertility, drainage, shaping, and pruning. We secured a supply of clean, disease-free plants, and established a protocol to protect our Gardens from boxwood blight.

We've made subtle changes to ensure that the Main Fountain Garden adheres to the values Mr. du Pont held in high regard. The allée of Norway maples has been replaced with linden trees, and new technology has been implemented to ensure the garden thrives for another 100 years; yet the boxwood is one element that remains the same. Despite the threat of the boxwood blight pathogen (Calonectria pseudonaviculata), the Garden will retain its fundamental design principles and continue to provide guests with an experience they could only replicate if they were to visit the European gardens so cherished by Mr. du Pont.