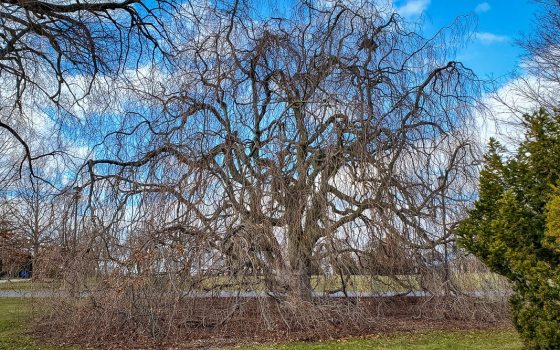 Large, stately trees that are simply majestic in the landscape, Fagus sylvatica or European beech, are deciduous hardwood trees that offer shelter and food to wildlife. While Fagus sylvatica are native throughout the forests of Europe, Longwood is the proud home of two specimens on view that represent a strikingly impressive form of Fagus sylvatica, and whose beautifully undulating lines are perhaps best appreciated during the winter months after their leaves have fallen:  Fagus sylvatica ‘Pendula’. These elegant weeping European beeches not only feature a fascinating form and branch structure to admire during this time of year but are also linked to some very interesting individuals and history.

While the exact date of arrival to North America is unknown, Fagus sylvatica ‘Pendula’ was known to have been planted in Hyde Park, New York in the early 1800s by David Hosack, the founder of the first botanic garden in America. In 1853, it was described in Thomas Meehan’s book, The American Handbook of Ornamental Trees, as a "fine weeping variety" and in 1872 as “unlike any other ornamental tree of the pleasure ground---and there are so few living trees of a good age and distinctive massive habit, that, when seen, it strikes the beholder with a feeling almost akin to reverence,” in The Horticulturist. In his Manual of Woody Landscape Plants, a very common horticulture reference guide, author Michael Dirr says, “I have never seen one I didn’t love.”

What makes the weeping European beech just so intriguing? Its appeal is largely rooted in its unique shape, as well as its unique propagation abilities. The tree’s tent-like structure develops from main branches that grow more horizontally, and side branches that hang vertically with a wavy effect that is best appreciated in winter when its form is not hidden by the foliage. Sometimes mature horizontal branches can sweep to the ground and root themselves in a process called layering, a type of propagation in which roots form on a stem while still attached to the parent plant. The branches of plants with a weeping habit can reach the ground and roots can form at the point where the shoot touches the soil. Not many trees can naturally do this, as not many trees’ stems touch the ground.

Longwood Gardens has two impressive specimens of Fagus sylvatica ‘Pendula’ that guests can view. The first can be seen once entering the Gardens through the Visitor Center, thanks to its location outside of the Open Air Theatre, opposite the Cow Lot. This beloved tree was donated by Nancy du Pont Reynolds Cooch in January 1975. Mrs. Reynolds Cooch was a long-time member of Longwood’s Advisory Committee, from May 1969 until her death in 2015. In October 1974 she offered the Gardens a 25-foot-tall, 10-inch trunk diameter weeping European beech specimen. Today this beech measures 41 feet tall and 57 feet wide with a 32-inch trunk diameter.

The most visible of Longwood’s weeping European beech and maybe one of Longwood’s most recognizable trees is the specimen that is planted along the northbound side of US Route 1. This 50-foot-tall, 84-foot-wide tree, with a 46-inch trunk diameter, was received from Kingsville Nursery of Kingsville, MD and planted in January 1966. Kingsville Nursery and owner Henry J. Hohman were world-famous for propagating and growing unusual trees. Hohman, who ran the nursery for 53 years, was known as an expert plantsman, specializing in plants with rare horticultural forms and won The Garden Club of America’s Medal of Honor, which is awarded for outstanding service to horticulture, in 1966.

These two trees are the not the only weeping European beeches that Longwood has ever owned. A very special specimen currently located in West Goshen Township, PA was once owned by Longwood. In 1967, S. Hallock du Pont gifted the land on which a very old Fagus sylvatica ‘Pendula’ lives to Longwood. This property, once known as the Fern Hill property, was purchased by S. Hallock du Pont to save the tree. In 1974, Longwood donated the property (and thereby the tree) to West Goshen Township to be maintained as a park. The tree is one of West Goshen’s heritage trees and is celebrated each Arbor Day.  Although the tree has lost its central trunk due to the nature of the weeping European beech, it has successfully layered, in that the limbs have rooted into the soil and new stems have sprouted.

No two Fagus sylvatica ‘Pendula’ specimens are the same, as there is much variation in trunk shape and branching habit among these beautiful trees … yet they are all strikingly beautiful. True to its name, as Pendula is Latin for “pendant” or “hanging”, Fagus sylvatica ‘Pendula’ is the perfect tree to ponder during the winter months, when its unique, undulating lines are able to be best seen and appreciated. The next time you’re here at Longwood, take a moment to take in the shape of our spectacular specimen that welcomes you along Route 1, and once you’ve come through our Visitor Center, pause and ponder the intricacies and significance of our Open Air Theatre weeping European beech amid our winter landscape.