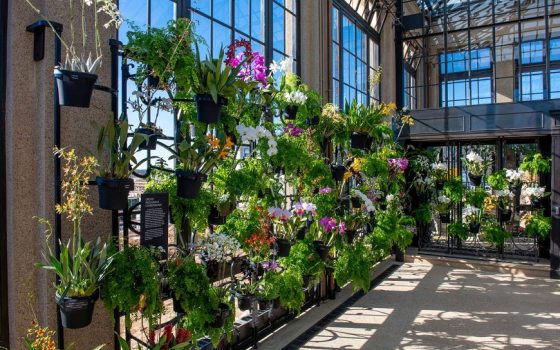 If asked to picture an orchid, what kind of flower comes up in your mind’s eye? With 25,000 species of orchids worldwide, these unusual plants have developed staggering diversity in order to survive in a variety of environments—and Longwood’s vast orchid collection reflects that diversity, showcasing orchids from far-flung jungles to cool mountain ecosystems and more around the world. Across the globe (and here at Longwood!) orchid flowers are recognized for their unique beauty, and many species of orchids are recognized as the national flower, or floral emblem, of foreign states and countries. Let’s take a trip abroad and explore which orchids that locales from Guatemala to the Seychelles have chosen to recognize and celebrate in their currency, their culture, and more … and discover when those revered orchids are in bloom here at Longwood.

The national flower of Guatemala tells an international tale of orchid fanatics. In 1933 Mrs. Letitia Southerland, the American President of the International Flower Show, wrote to Guatemalan President Jorge Ubico to give thanks for a donation of Guatemalan orchids that were exhibited for the first time at the show. She noted that Guatemala did not have any official floral emblem and suggested the white nun orchid (Lycaste virginalis)—which is part of the Longwood orchid collection—for this honor. A year later, it was formally recognized as the national flower, and is considered to symbolize the peace, purity, and fertile wealth of this country. Here at Longwood, this orchid generally flowers from September to January. In the wild, Lycaste virginalis is known to grow on the slopes of volcanos and throughout the Chiapas mountain range in Mexico and Guatemala.

Lycaste virginalis is known in Spanish by the common name “la monja blanca”, meaning “the white nun”, which refers to the floral column that looks like a small figure dressed in white and bent in prayer. This Spanish common name dates back to the 18th century, but the indigenous history of this orchid goes back much further! According to Edgar Alfredo Mó, an orchid researcher and fluent speaker of the indigenous Q’eqchi’ Maya language, Mayan communities refer to this orchid as “saq ixq”, or “white woman”. The white woman orchid has been cultivated in southern Mexico since the Aztec empire; records show that similar orchids were used to pay taxes under the ruler Moctezuma Ilhuicamina from 1440 to 1482. Just as orchid flowers were used as a form of currency back then, today we can find the image of the white woman orchid emblazoned on Guatemala’s 50 cent coin.

Moving further south, the Republic of Costa Rica boasts more than 1,300 discovered species of orchids. About 20 percent of those are endemic to the country, meaning they do not grow naturally in any other part of the world. On June 15, 1939 the Republic of Costa Rica’s Secretary of State for Development and Agriculture proposed Guarianthe skinneri as the national flower to represent the abundance and elegance of nature.

The botanical Latin name of Guarianthe skinneri honors the indigenous history of the orchid as well as recognizes the history of colonization in Central America. The genus name Guarianthe derives from the now-extinct indigenous Mangue language, wherein “guaitil-“ means “tree”. The root “gua-“, meaning “tree”, is still common in many Central American indigenous languages spoken today, and refers to the epiphytic nature of these wild orchids. The specific epithet skinneri honors George Skinner who was an English trader and amateur botanist who lived in Guatemala and sent plants back to Europe for study.

In Costa Rica, most folks know this orchid as “guaria morada”, or “purple guaria”. The purple guaria is a popular choice to decorate churches during Lenten and Holy Week, and oral legends speak of the flower’s gentle fragrance as a sign of good luck. The Costa Rican national flower was further honored by being integrated into the design for Costa Rican currency, the 5 colone note. This orchid flowers prolifically from January through April, and in 1972 the Costa Rican government declared that the second week of March would be known as Costa Rican Orchid Week because it coincided with peak blooming time for the purple guaria. Here at Longwood, this species flowers abundantly in April and May.

As we cross the Atlantic Ocean, we can explore even more nationally recognized orchid flowers. The African island nation of Seychelles recognized Angraecum eburneum, called “orkid payanke” in Seychellois, as their national flower in the 1990s.

Seychelles is home to about 30 species of orchids, and this particular species has been overharvested in the wild and can be difficult to find growing naturally. In 2018 this flower made national headlines because The Duchess of Sussex, Meghan Markle, wore a bridal veil embroidered with the national flower of Seychelles in recognition of their membership with the British Commonwealth. It’s also illustrated on the 50 rupee note and on many stamps.

Let us head eastwards towards India, where orchid conservation efforts are key to preserving biodiversity. The Indian state of Meghalya specially selected the lady’s slipper orchid (Paphiopedilum insigne) as their floral emblem. Meghalya contains subtropical and lowland tropical environments that are rich in orchid biodiversity, boasting nearly 350 discovered species. Traditional and generational knowledge stewarded by the three native tribes of this Indian state have allowed for indigenous conservation efforts to protect two sacred forests that contain the highest counts of orchid biodiversity. Human interaction within these two forests is prohibited. While Paphiopedilum insigne is abundant in the commercial world it is rare to find healthy populations in the wild, which is why indigenous conservation efforts are so important! Within the Longwood collection, our Paphiopedilum insigne plants are in bloom December through March.

In Southeast Asia, countries like Indonesia also recognize the importance of indigenous flowers and beauty in biodiversity. On World Environment Day on June 5, 1990, former Indonesian President Suharto selected three native flowers to represent the country’s national flower, rarest flower, and their flower of charm. Phalaenopsis amabilis, called the moon orchid or “anggrek bulan” in Indonesian, takes the title as Indonesia’s flower of charm. It was chosen for its widespread abundance throughout the country, and for its remarkable beauty--the moon orchid is even printed on Indonesian stamps. The shape and structure of the Phalaenopsis flower, with five combined petals and sepals, is symbolic of Indonesia’s five philosophic guiding principles. Here at Longwood, our Phalaenopsis generally flower from winter through summer!

Home to more than 1,800 species of orchids, Australia is our final continent to visit. The Australian state of Queensland is the only state to recognize an orchid as their floral emblem. In 1959, as the government prepared for the state’s Centenary, a poll was sent to the citizens to choose their own floral emblem. Overwhelmingly, the Cooktown orchid (Dendrobium bigibbum) won the popularity contest! The common name Cooktown orchid refers to the northern town where the first orchid of this species was discovered in 1852. Not only is this species native to the state of Queensland, but it is easy to care for and is one of the showiest of all Australian orchids. The Cooktown orchid has been featured on multiple Australian stamps dating back to 1968 and more recently, in 1998. Cooktown orchid specimens in the Longwood collection can be seen blooming in August and September.

From North, Central, and South America to Africa, Asia, and Australia, we’ve explored nationally revered orchids on every continent where orchids can be found. As symbols of national pride and unity, orchid flowers have been featured on currency, stamps, and all manner of official state emblems. Longwood’s diverse orchid collection reflects the international diversity of orchids celebrated around the globe … and each orchid we explored here can be viewed in our orchid collection at various times throughout the year. Now that our Orchid House has reopened, we are excited to share the international sights and smells (and stories!) of our incredible collection with you and your family.