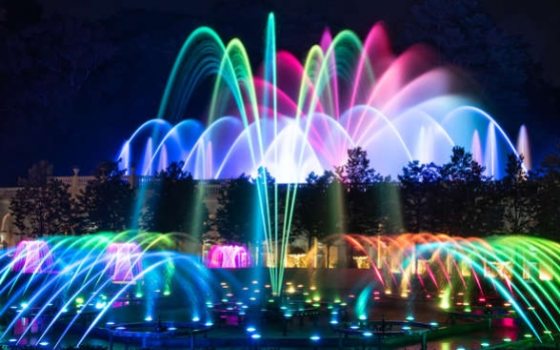 Editor’s Note: This blog post was originally published on August 17, 2018.

Longwood’s fascination with water as a performance element originates with our founder, Pierre S. du Pont. Captivated with fountains, especially illuminated fountains, from the time he was a young boy, du Pont installed his first fountain—the Round Fountain, nestled at the center of the Flower Garden Walk—within a year of his 1906 purchase of Longwood, followed by the 1915 debut of the Open Air Theatre fountains and 1927 opening of the Italian Water Garden and enlarged Open Air Theatre fountains.

In 1931, du Pont unveiled his crowning achievement in lighting water with the Main Fountain Garden, controlled by the first of Longwood’s four Main Fountain control systems utilized throughout the years. “It was a hands-on control board, like an airplane cockpit. ... The controller—the electrician—improvised the show as he went along,” shares P.S. du Pont Fellow and fountain choreographer Colvin Randall. Our original 1931 system controlled the Main Fountain Garden’s 724 lights in five filtered glass colors allowing for white, red, blue, green, and yellow illumination. The controller utilized a switch to increase fountain height and movable throttles to change the colors, using dimmers with the fastest dimming rate of 30 seconds and the slowest at one minute, which gradually changed the color of each fountain stream.

The only Longwood fountain choreographer who has designed performances using three of our four programming systems, Randall has designed breathtaking shows with the 1966 theater board, the 1984 computerized controls, and today’s cutting-edge Syncronorm computer program—a sophisticated fountain control system with three-dimensional visualization that allows a designer to view the show as it’s designed in real time. The options and possibilities afforded by the Main Fountain Garden’s robotic jets, LED lighting, and Syncronorm control system are truly endless. “Before, it was all incandescent,” shares Associate Director of Performing Arts Brady Gonsalves, who serves as one of Longwood’s fountain choreographers. “It was original lighting, so each fountain, each water stream, had a dedicated colored glass light. But now with LED technology, there literally are millions of color combinations.”

The advancement of fountain control technology aside, our fountain choreographers’ artistic abilities and creativity are the backbone of our stunning performances, which take time, patience, and constant fine-tuning to achieve. “My first show probably took in the ballpark of over 200 hours to create. You’re looking at multiple hours for a minute of actual finished show,” shares Gonsalves.

Director of Performing Arts Tom Warner notes how “the choreographers really are listening to the music and, much like a dance choreographer would … they’re coming up with visions in their head and they can make the lights dance just as well as the fountains,” Warner shares. “When you get down to it, it’s a performance.”

Learn more about our fountain performance design as Randall, Gonsalves, and Warner share their creative process in the video clip below.