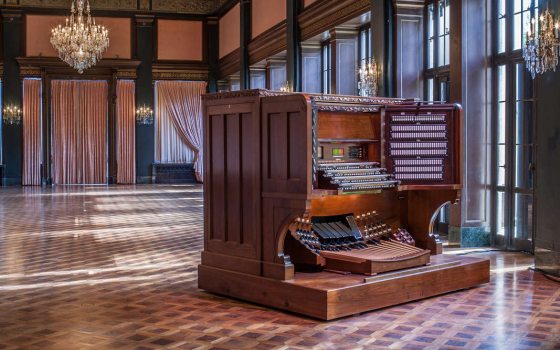 To the Tune of Perfection: Updating The Longwood Organ

Even in peak condition, pipe organs are like gardens: they need tending. In a garden, maintenance involves watering, weeding, pruning, and training. For any pipe organ—including The Longwood Organ—such care translates into tuning, cleaning, and periodic mechanical adjustment. Just as with any garden or exhibit at Longwood, the goal is to have the organ in peak tune and mechanical condition at all times.

With 10,010 pipes divided into 146 ranks, The Longwood Organ was completed in 1930 and remains in our Conservatory to this day. After undergoing a seven-year restoration process beginning in 2004, during which it was completely rewired, re-leathered, and refurbished, the organ was brought back into regular use in 2011. Since that time, its 10,010 pipes have been heard in daily automated demonstrations, seasonal Christmastime sing-alongs, Sunday afternoon concerts, special evening presentations, Open Organ Console Days, and the Longwood Gardens International Organ Competition, returning for its third iteration this coming June. For an instrument that has undergone such a rigorous restoration, why does it still require regular maintenance?

The organ’s restorers, Spencer Organ Company of Waltham, Massachusetts, have cared for the organ since the 2011 completion of the restoration project. A crew visits Longwood three to five times annually, generally before major events. In the past year, the instrument was prepared before the summer 2018 Organ Academy, and again before the November 2018 joint recital of Peter Richard Conte and Jeremy Filsell.

Astute observers will notice that, from time to time since the seven-year restoration, further modifications have been carried out. In this respect, the organ is not unlike our smartphones, whose software or hardware needs to be periodically updated to incorporate the latest features. At first, the organ’s electronic transmission system (the network that links the console to the pipes) was upgraded. Incrementally, the combination action (the memorized buttons that allow players to recall, immediately, new groups of stops) has also been updated. The latest project, which took place in January 2019, was geared to simplify and enhance the combination action.

Most of those efforts are concentrated inside the console. The latest upgrade included a new computer that permits more control over features that previously had to be managed separately by the organist. This latest version also connects wirelessly to an iPod and iPad, with additional features such as a tuning app that allows the tuner to sound pipes remotely. The portable devices add controls that otherwise would have to be squeezed onto the console, which is already bursting with switches, buttons, and tabs.

The latest work necessitated rewiring all of the console’s stop tablets and controls. Richard Houghten and his team from Milan, Michigan (who installed the console back in 2001), spent almost three weeks in January taking apart and putting back together thousands of wires in painstaking fashion. The finished result is like perfect stitchwork in its detailed organization, even though hidden within the console’s wood cabinetry.

The Longwood Organ will be prepared before David Briggs’ performance on March 22, 2019. A crew will also be on hand during the Longwood Gardens International Organ Competition, held June 18-22, 2019. With competitors’ access to the organ tightly time-controlled prior to and during this competitive event, even the slightest issue cannot be allowed to impede on players’ prep time. Since Longwood installed climate control in the organ chambers in 2005, the tuning is more stable than ever before. Nonetheless, certain pipes, such as the powerful vibrating reeds, benefit from touch-ups that require a few minute but skilled taps here and there to bring them back into perfect tune.