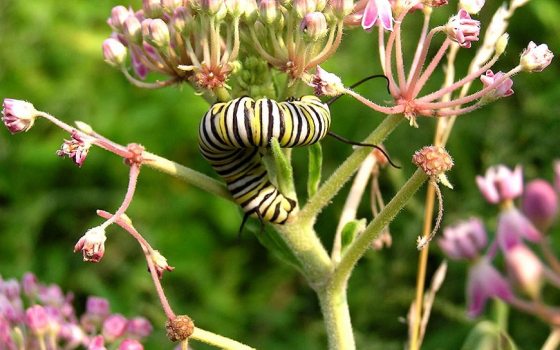 The Season (and Reason) for Native Plants

For many, the epitome of the gardening season arrives with the long days of summer. Flowers of countless garden favorites abound this time of year and among them are several of our most cherished, useful, unusual, and rare native plants. The emphasis on using native plants in the landscape is a trend throughout the greater world of American horticulture that has gained interest and momentum in recent years for a variety of reasons, including the fact that native plants help support pollinators and ecosystem health, conservation, the fight against invasive or potentially invasive exotic species, and many more. At Longwood, native plants—including milkweeds, rosinweeds, phlox, woody plants, and many others—are featured throughout the Gardens ... most prominently in Peirce’s Woods, which reaches its peak in the spring, and in the summer and fall Meadow Garden, which features the highest concentration of native species.

The most prominent and colorful plants of the summer season are the herbaceous plants, or forbs, such as the common milkweed (Asclepias syriaca)—one of the most conspicuous plants of the roadside.  While not startling in flower color, its coarsely textured, large leaves and axillary pompoms of flowers make for a unique, unmistakable display followed by curious horn-shaped fruits (known botanically as follicles). This species occurs in disturbed areas throughout the region and can be found in different parts of our Gardens. It is an important plant for native pollinators and insects, particularly butterflies and moths, who use the plant as larval food. Although an important plant for its ecosystem services, its garden use should be tempered, as it can truly become “milkweed”—spreading far, wide, and aggressively in the tended garden setting.

Other garden milkweeds include the well-known “butterfly weed”, Aslcepias tuberosa, which can be seen in the Meadow Garden with flowers that range from orange to yellow and nearly red beginning in late June. It is a Pennsylvania native plant that should be in every garden for its vibrant flower colors, ability to attract droves of pollinators, and adaptability to droughty gardens.

There are many other milkweeds suited for garden use.  My personal favorite is the stunning A. purpurascens, with its rich, purple-pink flowers in June; similar, but shorter stature compared to A. syriaca; and less aggressive garden presence. Less well-known in gardens is Asclepias viridiflora, the green comet milkweed, that boasts axillary clusters of bright green flowers in July and August. What it lacks in flower color is more than made up for in ecological services. Even among the milkweeds, this species is a favorite of migrating monarchs, and is nearly always the first species where their caterpillars can be found. If you have wet or damp soils, consider Asclepias incarnata, the swamp milkweed. There are many more native milkweeds and nearly all deserve further attention from gardeners, conservationist, and restoration biologists, but can be of limited availability at garden centers since all milkweeds do not grow well in containers.

In addition to their well-known beauty and ecological function, milkweeds also represent an important link to the botanical history of Chester County. Historically, Chester County was the most floristically diverse county in Pennsylvania, based on records of species collected here since European settlement.  One of the most unique discoveries was made in 1898 when famed botanist and author of A Flora of Chester County Hugh Stone found the rare Asclepias rubra, red milkweed, flowering in the valley west of Downingtown. Historically this species was found in five Pennsylvania counties, but this is the only record from Chester County. A. rubra has not been seen in Pennsylvania since the 1930s and is now believed to be extirpated (extinct) from the state, as well as rare throughout its entire range, which extends from southeastern Pennsylvania to east Texas. Working with botanists in Delaware, seeds were collected from one of the closest known populations in November 2019 and given to Longwood’s Research and Conservation team with the hope of propagating them and introducing them to the Meadow Garden. The seeds are germinating now and should be ready to plant in the Gardens next spring.

Another highlight among native plants are the rosinweeds, members of the genus Silphium, which are perennials related to the better known sunflower (Helianthus annuus). One of the best examples of this genus in the garden are the towering specimens of Silphium perfoliatum, the cup-plant along the Flower Garden Walk. Its common name comes from the adjoining leaf bases that clasp the stem and form a cup-like structure that captures water after rain. The flowers appear in terminal clusters and each resembles a small sunflower. All rosinweeds are especially attractive to gold finches, which feed on the seeds. Nearly all Silphium species are garden worthy, but best when given ample space, as they can become aggressive in garden settings.  The Research and Conservation division at Longwood is evaluating several rarely cultivated species for garden usefulness, including the rare sticky rosinweed (Silphium glutinosum), which is naturally found in only one Alabama county!

There is hardly a more American genus than Phlox. Nearly all of the 65 or so species are native to the US, with one species occurring across large expanses of Siberia and the Far East. Of these 65, about 25 species can be found throughout the eastern US. Phlox paniculata, or border phlox, is the best known of the group for its conical inflorescences of fragrant flowers that typically begin around the 4th of July.  This species is intensely popular throughout temperate regions of the world and in the last 200 years over 8,000 cultivars have been selected!  Unfortunately, many of them succumb to powdery mildew, but ‘David’, ‘Delta Snow’, ‘Jeanna’, and ‘Texas Pink’, to name a few, are very resistant.  All phloxes are great for attracting butterflies and moths in the garden and are especially favored by clearwing moths (Hemaris thysbe).

Many woody plants are also at their finest in summer. One of the best rhododendrons for our climate, Rhododendron maximum, or rosebay, is planted at various locations throughout the Gardens, and produces terminal trusses of light pink flowers from late June into July.  In addition to being native to Pennsylvania, it is among the toughest, as well as most drought- and heat-tolerant of all rhododendrons, and adaptable to a variety of garden conditions. A beautiful relative of the rosebay is the lesser-known plum-leaved azalea, Rhododendron prunifolium. This deciduous azalea features prominently in Peirce’s woods where its July through August flowering period is the swan song of the azalea season. Although native to a small area of Alabama and Georgia, it is perfectly cold hardy throughout Pennsylvania.

While as many as 17,000 different types of plants are native to the US., and almost 3,400 types of plants are native to Pennsylvania, only a handful of them are widely used in garden settings … and even fewer grace garden center sales tables. We encourage you to enjoy the beauty of the many native plants found throughout our Gardens (we grow more than 500 different types of plants native to Pennsylvania here at Longwood!), and hope that they serve as a source of inspiration and education about the complexities of the natural world we live in.