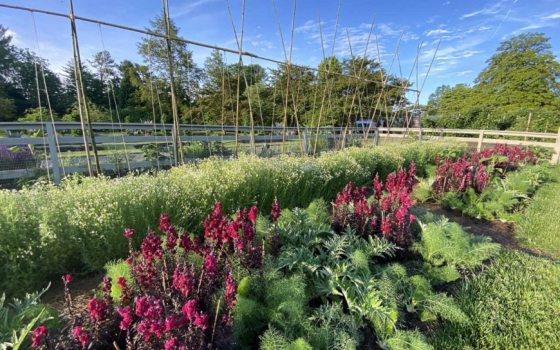 How to Grow Early Spring Vegetables

After February’s never-ending snow, I’m looking forward to what March will bring for the Ornamental Kitchen Garden as we sow a wide variety of vegetables both outdoors in the garden and indoors in our greenhouse. If timed carefully, the vegetable gardener can reap the rewards of frost-tolerant spring vegetables—peas, broccoli, kale, arugula, cabbage, spinach, carrots, radishes, scallions, cilantro, and lettuce, to name a few—before even thinking about planting heat-loving crops like tomatoes or peppers. The type of vegetables that prefer to grow in the spring are similar to those that thrive in the fall. These crops languish in the heat of our summers, usually going to flower and seed, or developing an unpleasant taste or texture once the weather warms. They don’t mind a little chill at night, which means they can be planted in the garden even earlier than one might think … and will be ready to harvest by the time you’re planting your summer crops. The early bird gets the first harvest when it comes to spring planting.

The key to successful spring planting is knowing when and how to sow your crops. Some can be “direct sown,” or planted right into your garden soil, while others prefer to get a jump on the season indoors. Most legumes, root crops, and herbs prefer to be direct sown. Peas and spinach can be planted as soon as the soil can be worked in March, followed by radishes, beets, carrots, dill, and cilantro a couple weeks later. To sow seeds directly in the garden, draw furrows into the soil surface where you want to sow your seed, then drop seeds into the furrow at the appropriate spacing. Refer to your seed packet for information on seed spacing and depth. The rows of seed should be covered with soil and firmed by hand or with a hoe to ensure good seed-to-soil contact. In Longwood’s Ornamental Kitchen Garden, we use lines of string to mark where we have sown seed, keeping the rows moist until the seeds have germinated.

Meanwhile, early March is also a great time to start spring crops indoors. Timing is everything here. The goal of starting your own vegetable transplants is to grow healthy young plants that are mature enough to withstand outdoor conditions without letting them overgrow their containers. Plants left in their trays too long will become rootbound and nutrient-stressed, making them vulnerable to transplant shock when planted in the garden. Vegetable starts available at garden centers often fall into this category, as they usually have been sitting on shelves for weeks, possibly deprived of water and nutrients. Such severely stressed young plants are not set up to be successful in your garden, so starting your own vegetable transplants is usually a better way to go.

Kale, broccoli, cauliflower, onions, fennel, and lettuces are excellent crops to start indoors in March. Simply plant your seeds in a fine-textured seed-starting mix in cell trays or flats. A soil mix for germination usually consists of peat moss and fine perlite. Egg cartons are a common household substitute for cell trays. These crops require full sun, so keep your starts in a sunny south-facing window if you don’t have a greenhouse or sunroom to keep them in. After four to six weeks, most of these crops will be ready to plant into the garden in mid-April.

Shortly following an initial round of spring sowings, most summer crops can also be started indoors from mid- to late March. Tomatoes, peppers, and eggplant take six to eight weeks from seed and will be ready to transplant in May. Cucumbers, zucchini, squash, and melons grow very quickly, ready to transplant after just three weeks. Sow them indoors in late April for May transplanting. Alternatively, these squash family crops are sensitive to transplanting and perform better when directly sown into the garden after the danger of frost has passed in May.

Be sure to “harden off” all transplants for their last week or two in trays. Because the indoor environment has a consistent temperature and calm conditions, vegetable starts need to be acclimated to the more variable conditions of the outdoors. This is done by placing plants in a sunny spot outside for increasing periods of time each day. They should be brought inside if a hard frost or severe weather is forecasted. After some time outside, your starts are ready to be planted in the garden. Keep them watered until they are established, and with some regular maintenance you will have a long and productive gardening season.

Looking for an easy reference guide for when to plant your spring vegetables in our region? Look no further!

Editor’s note: Looking to grow even more in your home garden? Register for our new online, self-paced Vegetables, Herbs, Fruits, and Nuts Online course, and learn how to identify and incorporate a number of edible selections in your garden.