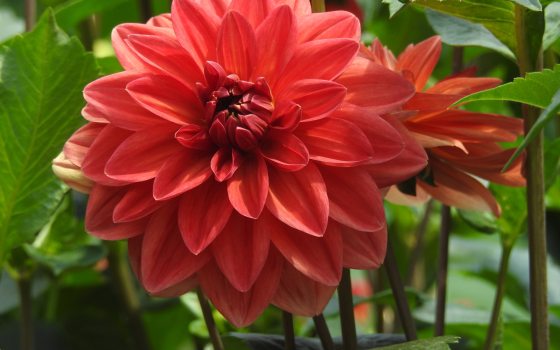 If you’re looking to augment your garden with late season blooms at a time when most perennials begin to fade (usually blooming right up until the first frost), consider dahlias. Dahlias come in many colors, shapes, and sizes, and because of their variety, can be incorporated into many garden landscapes. Dahlias are also beautiful in the home, as they make excellent cut flowers.

A member of the aster family, the dahlia is related to the chrysanthemum and sunflower and features eight sets of chromosomes, which allows for their varied flower forms—21 forms, to be exact. The American Dahlia Society recognizes dahlias in three groups according to purpose: garden-type dahlias, exhibition dahlias, and border or container dahlias.

The American Dahlia Society recognizes 15 different colors or color combinations, 21 flower forms, and six sizes of dahlias. Dahlia plants range in height from 15 inches to more than 6 feet tall; and while some dahlia flowers are less than 2 inches wide, others can grow to more than 10 inches in diameter. The dahlias with the largest flowers are often referred to as dinner plate or giant dahlias.

Official dahlia classification identifies dahlias by flower form. These classifications include miniature ball (small ball-shaped blooms that range from 2 to 3.5 inches in diameter), stellar (long and narrow petals with pointed tips that create a star-like shape), waterlily (delicate cupped petals with rounded tips that surround a closed center bloom), and orchid (a single row of expressively rolled petals arranged in a flat plane that surrounds an open center), among many others. You have plenty to choose from when it comes to dahlias, as there are thousands of varieties available worldwide.

Getting Started with Dahlias

Like chrysanthemums, dahlias start blooming in early August when the days get shorter. They prefer full sun, less humid conditions, and cooler nights. If your garden experiences very hot weather, you may consider misting the plants, but avoid heavy watering. Consider providing some shade to help prevent dahlias from fading in color.

Bright and bold, dahlias are certainly rewarding to grow and can be planted in many garden settings. If you have limited garden space or would like to augment a deck or porch, they can fare very well in containers. It’s important to know, however, that while they’re resilient and fun to grow, dahlias require quite a bit of labor, since most should be staked, due to their hollow stems, and can fall victim to common pests, including spider mites and thrips.

Before planting dahlias, it’s best to put some thought into where they would thrive best in your garden. They can be grown in mixed beds, herbaceous borders, or as a dedicated dahlia display. If you’d like to try them in a border, keep in mind that some dahlia cultivars, such as ‘Mystic Fantasy’, can develop into bushes 3 or more feet across and 4 to 5 feet high, and must have adequate space for proper growth and be properly staked. If you’re looking for a more modest cultivar or would like to incorporate dahlias as massed groups in a mixed border, consider dahlias with ball, waterlily, or pompon flower forms.

Native to Mexico, dahlias grow naturally in frost-free climates. They grow from tubers, which should be planted in the spring when there is little chance of frost, usually around the time one would plant a tomato; planting tubers about 4 to 8 inches underground—at least in our area (planting depth differs by zone)—helps keep them protected. Tubers can be started indoors about a month before planting time, then placed in full to part sun in well-drained soil. Consider labeling them or keeping track of which dahlia is which; this will keep them organized when it’s time to dig up the tubers.

After a season of dahlia enjoyment, you must dig up the tubers as they will decompose if left in the ground over winter. While dahlias grow naturally in climates that do not experience frost, their tuberous nature enables them to survive periods of dormancy. Thus, gardeners in temperate climates can successfully grow dahlias as long as the tubers are stored in cool, frost-free conditions over the winter.

Dahlias’ hollow stems require that most forms be supported by some form of staking as they grow. Ideally, those stakes should be placed in the ground before the dahlias are planted in the spring, so the tubers are not disturbed. Use a single metal rebar, multiple bamboo stakes, or sturdy tomato cages for staking.

Once dahlia plants reach 10 inches tall, you’ll need to pinch the tips of the main shoot to encourage branching as they grow. Pinching and grooming allow dahlia plants to branch out and produce beautiful blooms.

Gardeners should treat dahlias as annuals. After the first frost, it’s important to dig up the tubers and store them over winter, labeling each plant for easy identification.

A good rule of thumb is to cut the stems within 4 inches of the ground once the foliage starts to lose its color or is killed by frost. Then wait a week before digging the tubers, giving them time to develop next year’s sprouts, or “eyes.”

Dig carefully about 8 to 10 inches from the stem. Gently lift the tubers from the ground and allow the entire clump to air dry for a few days, while protected from rain and frost, which toughens their skin for winter storage.

After allowing the tubers to dry, you can divide them in the fall or wait until spring. Be sure each divided tuber has a piece of the crown with an eye. Found on the dahlia crown, eyes are raised circular areas where the tuber connects to the stem. Some dahlia varieties have eyes that are easier to see than others. As long as you have a piece of the stem, you will most likely have an eye that develops.

Trim back the stems to 1 inch and gently place the tubers into pots or bins filled with sand, sawdust, or vermiculite. If you are putting multiple tubers into one container, layer them so they don’t touch each other. Store the containers in a cool (40- to 50-degree), dark place and check them monthly to make sure they’re not rotting (which means they’re too wet), or wrinkling (which means they’re too dry). If a tuber is rotting, remove the rot immediately to avoid contaminating other tubers. If a tuber is wrinkling, moisten the material in which the tuber is stored.

We’re proud to be the site of The American Dahlia Society’s 2018 National Show, which we are hosting with The Greater Philadelphia Dahlia Society on Saturday, September 22, and Sunday, September 23. During the show, you’ll be wowed by the variety of dahlia forms in our Conservatory, with thousands of spectacular blooms displayed in single and three-bloom exhibits, baskets, floral designs, and vases.

In celebration of the dahlia, our horticulturists have outfitted the Trial Garden with many dahlia varieties. The Trial Garden’s 12 southern beds display most of the 21 different forms and unnamed varieties, and the northern beds display aesthetic combinations of dahlias and companion plants. As in years past, our Flower Garden Walk is also a dahlia hotbed, and a great place to find inspiration for incorporating dahlias into your own garden.