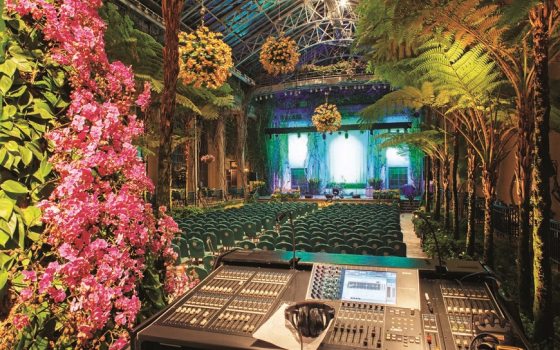 Starting this month, live music returns to the splendor of our Conservatory—and we are honored to bring to you a fantastic lineup of artists that includes several recent recipients of 2022 Grammy Award nominations. From the endlessly innovative Nordic world music stars Dreamers’ Circus to the powerhouse vocals of Venezuelan artist Nella to the distinctive musical voice of pianist Simone Dinnerstein, the sounds of world, classical, jazz, and organ music (including some Longwood debuts!) will very soon be filling the ever-changing beauty of our Conservatory with our 2022 Performance Series—and we invite you to join us.

After wowing our audience in 2019, young Danish trio Dreamers’ Circus returns to our Exhibition Hall on February 3, bringing with them outstanding musicianship and an adventurous take that has brought the band to the forefront of the Nordic folk and world music scene. With five albums to their name thus far—including Blue White Gold (2020), awarded Album of the Year by the Danish Music Awards—Nikolaj Busk on piano and accordion; Ale Carr on Nordic cittern; and Rune Tonsgaard Sørensen on violin draw inspiration from the deep traditions of regional folk music and reshape them into something entirely new—and entirely remarkable.

Speaking of young, impressive talent, organist Katelyn Emerson graces our Ballroom on February 25, making her Longwood debut with an exciting program spanning the 14th through 20th centuries. Named a leading young organist in the inaugural “20 under 30” class by The Diapason, Emerson is internationally renowned for her thrilling performances, her impressive musicianship, and her innovative organ playing. Emerson has received top awards in the American Guild of Organists’ National Young Artists Organ Competition, Musashino International Organ Competition (Japan), International Organ Competition “Pierre de Manchicourt” (France), and Mikael Tariverdiev International Organ Competition (Russia)—and on February 25 will treat us to Fantasy and Fugue on the chorale "Ad nos, ad salutarem undam" by Liszt, among other selections, on the 10,010-pipe Longwood Organ, the largest Aeolian organ ever constructed in a residential setting. We are thrilled to welcome her here for her Longwood debut—and we can’t wait to see what she accomplishes next.

Performing on March 3 is a highly decorated artist celebrated for her distinctive musical voice and recently named 2022 Grammy Award Nominee for Best Classical Instrumental Solo. With 10 albums that have all topped the Billboard classical charts, American pianist Simone Dinnerstein is a huge star in the classical musical world, called “an artist of strikingly original ideas and irrefutable integrity” (The Washington Post) and heralded by her commitment to share classical music with all, often performing at non-traditional venues and to audiences who don’t often hear classical music. And she’s committed to the future of music. Dinnerstein founded Neighborhood Classics—a concert series open to the public and hosted by New York City Public Schools to raise funds for their music education programs—and created a program called Bachpacking, in which she takes a digital keyboard to elementary school classrooms, helping young children get close to the music she loves. During her March 3 performance here at Longwood, Dinnerstein will share material from her latest album release, including two of Schumann’s masterpieces: Arabseque and Kreisleriana—it’s sure to be a thrilling evening.

Originally slated to make their Longwood debut in the spring of 2020, Noa with Gil Dor are instead making their long-awaited debut here on March 5. An internationally renowned artist of Yemenite origins, Noa is, quite simply, a force of nature both on and off the stage, especially when it comes to her commitment to peace between Israelis and Palestinians. An Israeli-born and New York-raised singer and songwriter, Noa has served as Commander of the Order of Merit of the Italian Republic, Goodwill Ambassador to the UN, and a Global Leader of Tomorrow, among many awards for her artistry and commitment to peace. On March 5, Noa performs with her long-standing musical collaborator and guitarist Gil Dor, featuring selections from her most recent album Afterallogy, as well as pieces from her Quincy Jones-produced program Letters to Bach, a 12-piece selection of Bach’s instrumental music with Noa’s contemporary lyrics and messages. Together with Dor—accomplished musician and co-founder of the Rimon School of music—Noa has released 15 international albums; has performed for three Popes and from Carnegie Hall to the White House; as has shared the stage with such legends as Stevie Wonder, Andrea Bocelli, and Sting. Noa’s strongest influences from the singer-songwriters of the 60s, combined with her Yemenite roots and Dor’s strong background in jazz, classical, and rock, have created their powerful, unique sound that you just have to experience in-person to truly fathom.

There is so much to say about Nella. Not only is she the 2019 Latin Grammy Award Winner for Best New Artist; the 2022 Latin Grammy Award Nominee for Best Traditional Pop Vocal Album; and the 2022 Latin Grammy Award Nominee for Best Pop Song (with Javier Limón) … she’s also the epitome of distinctively soulful sound, thanks to her powerhouse voice combined with the folklore roots of Venezuela and Andalusian inspirations. Nella brought the house down when she performed at Longwood in October 2019 and has since signed with Sony Music Records and released her new album Doce Margaritas … so she’ll have even more to share with us this go ‘round on March 25 in our Exhibition Hall. Nella’s talents are indeed multifaceted; she was recruited by Academy Award winner Asghar Farhadi to join the A-list cast of his film Everybody Knows, alongside Academy Award winner Javier Bardem, Ricardo Darín, and Academy Award winner Penélope Cruz. Nella performed songs written by Javier Limón exclusively for the screenplay. Experience the excitement here on March 25.

With April comes our latest performance by Longwood Gardens Principal Organist Peter Richard Conte, as he showcases the intricacies of the Longwood Organ with Symphonie-Passion, Op. 23 (Dupré) and Conte’s transcription for organ of Rossini’s The Barber of Seville (Overture). Also the Wanamaker Grand Court Organist—the fourth person to hold that title since the organ first played in 1911—as well as organist-choirmaster of St. Clement’s Church, Philadelphia, and frequent collaborator and soloist with The Philadelphia Orchestra, Conte is highly regarded as an innovative, skillful performer and arranger of organ transcriptions—and his April 8 performance at Longwood will be no exception.

Our 2022 Performance Series, and all the artistry it brings to our spectacular Conservatory, is music to our ears … and we look forward to welcoming you to experience the magic of performing arts here at Longwood.