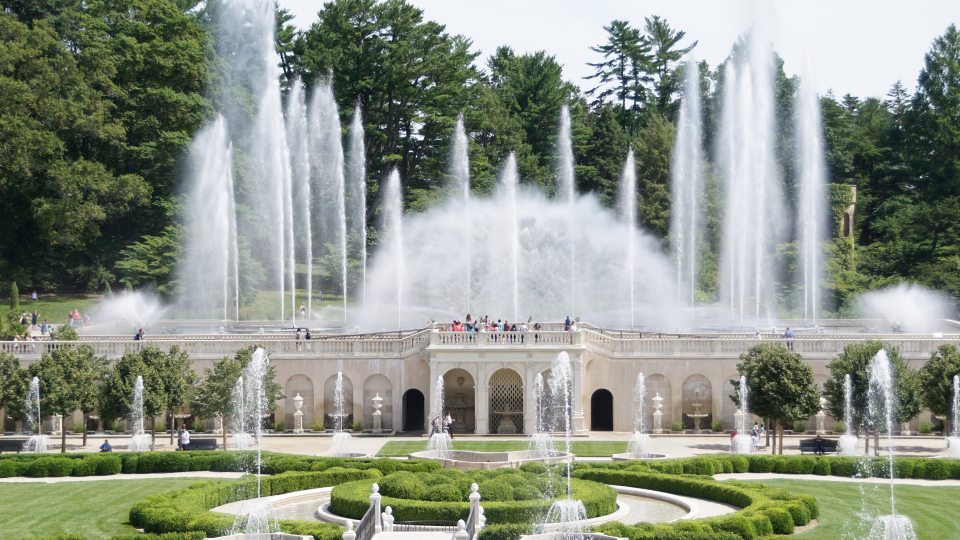 The Main Fountain Garden is the culmination of the legacy and vision of our founder Pierre S. du Pont (1870-1954), combining classic garden design with extravagant theater, astounding choreography, a spectrum of color, musical accompaniment, and, on special occasions, fireworks!  As the water rises and falls, dances and sways, you might feel as though an impressionist painting has come to life. European-inspired architecture and hand-carved Italianate limestone stonework and sculptures provide an impressive structure to this unforgettable, world-class formal garden.

The Main Fountain Garden has been mesmerizing our guests for more than 90 years. Neoclassical terraces and fountains capture the spirit of Pierre’s vision for beauty, grandeur, and showmanship. Expertly clipped boxwood hedges frame the fountains and architecture, highlighting the symmetry and flow of the space, while lush lawns and Italianate limestone sculptures add depth to the view. Reflecting the French Baroque inspirations of Pierre’s original design, hand-pruned allées of littleleaf linden trees provide a pristine canopy for strolling (and cooling off) on warmer days. Especially refreshing at any time of year is the Grotto, added during our award-winning restoration of the garden in 2017. Concealed behind the Loggia, it adds an element of surprise and discovery, transporting visitors to an otherworldly moment of peaceful contemplation.

The Main Fountain Garden’s original fountains were in use from 1931 until the kickoff of our expansive renovation in 2014. At that time, we implemented brand-new infrastructure housed mostly underground, featuring 1,400 feet of tunnels that include state-of-the-art mechanical systems that run the hydraulic operations, geothermal wells, multiple separate reservoirs, and 5 miles of pipes that support 35,000 gallons of water that courses through them daily.

Longwood Gardens has always been a place devoted to shared memories and togetherness. Providing an unequaled guest experience is at the forefront of our mission—along with thoughtful and innovative stewardship of the land, our buildings, and our commitment to so many of the garden’s original, historic elements. For us, the Main Fountain Garden represents the epitome of why we are here: the celebration of beauty, in all its lasting and evolving forms.

Please note: The water features of this garden can be enjoyed from mid-April until late October. The fountains have been turned off for the season and will reopen in spring 2023. The Grotto water features continue to run year-round, weather permitting. 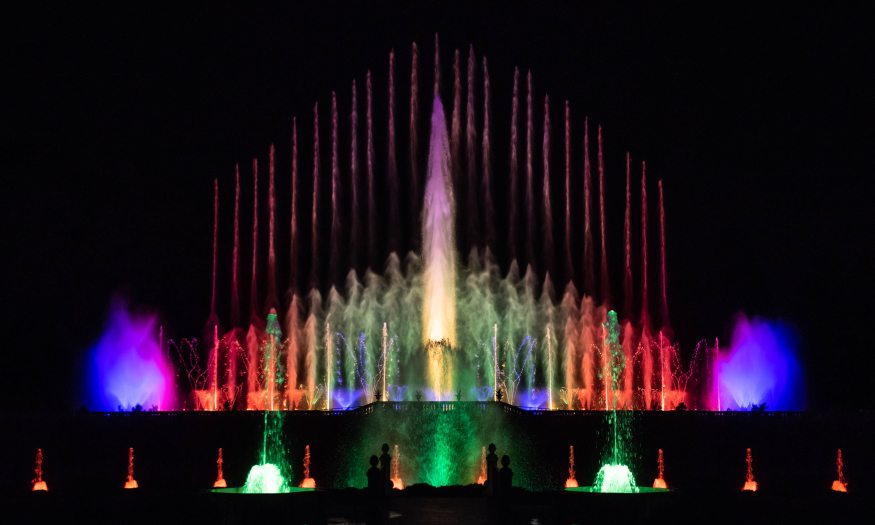 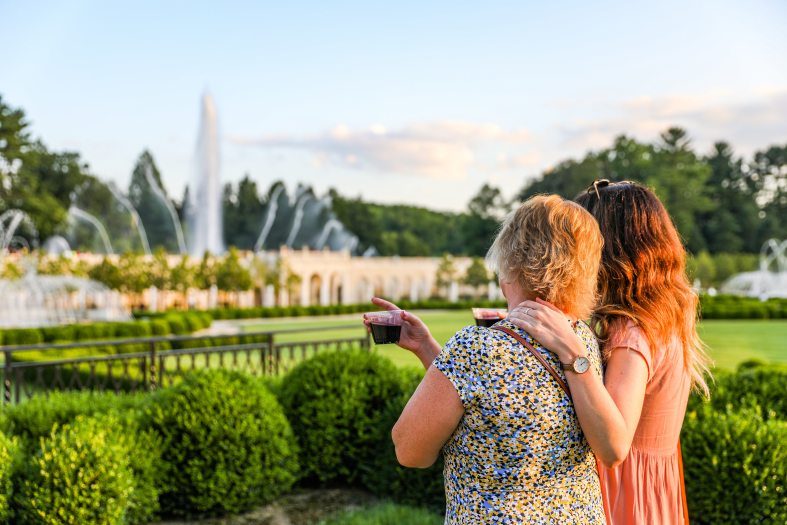 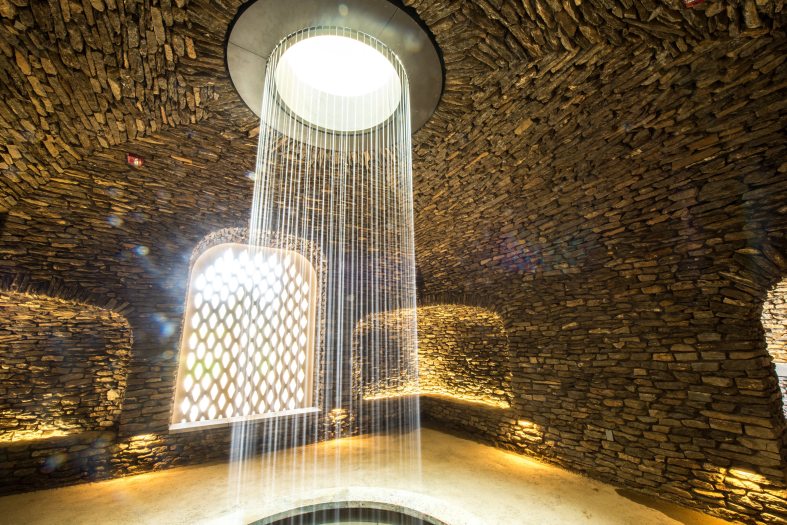 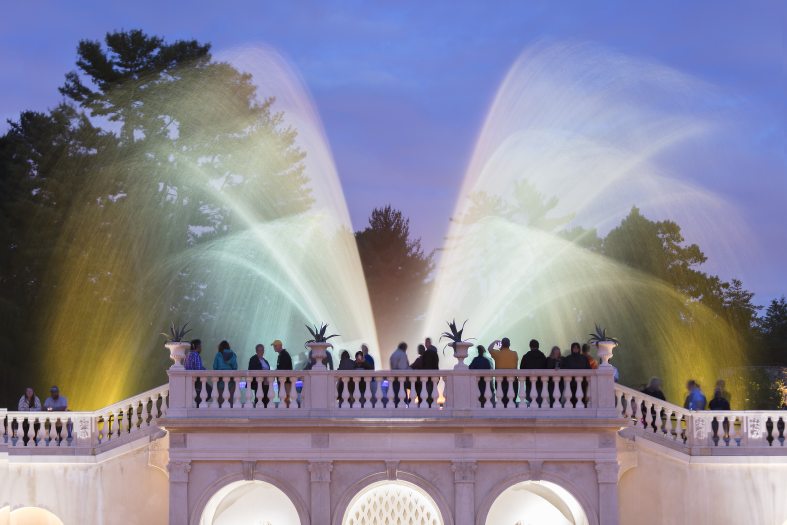 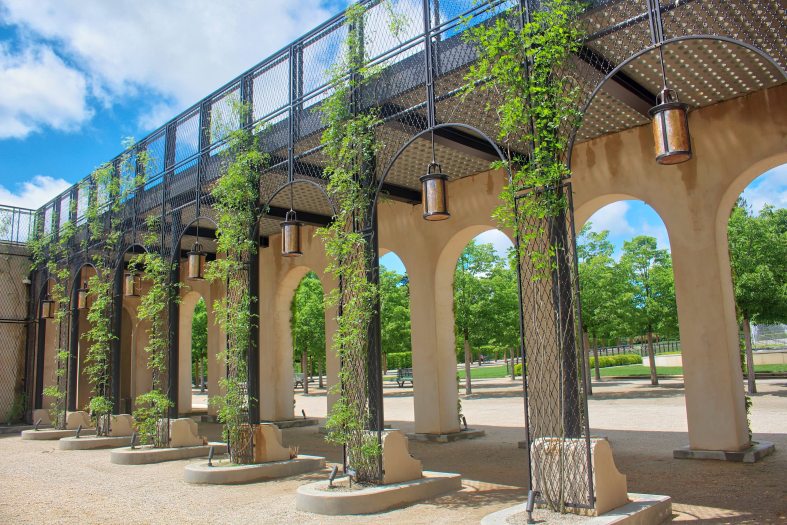 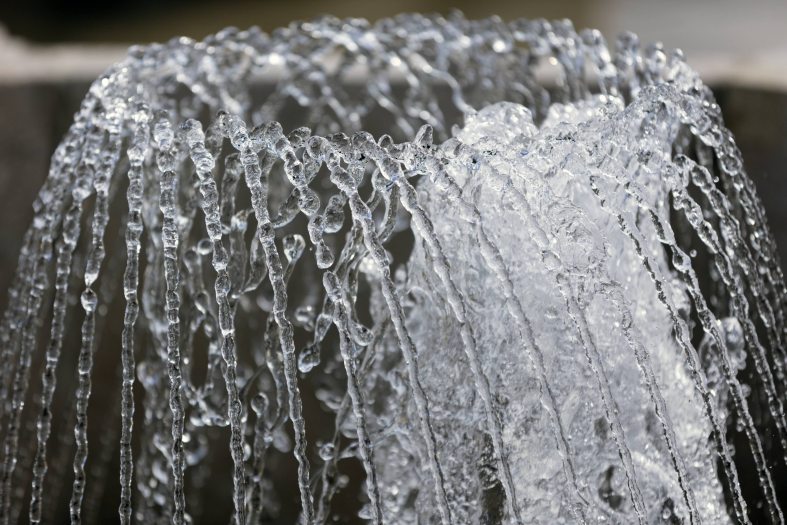 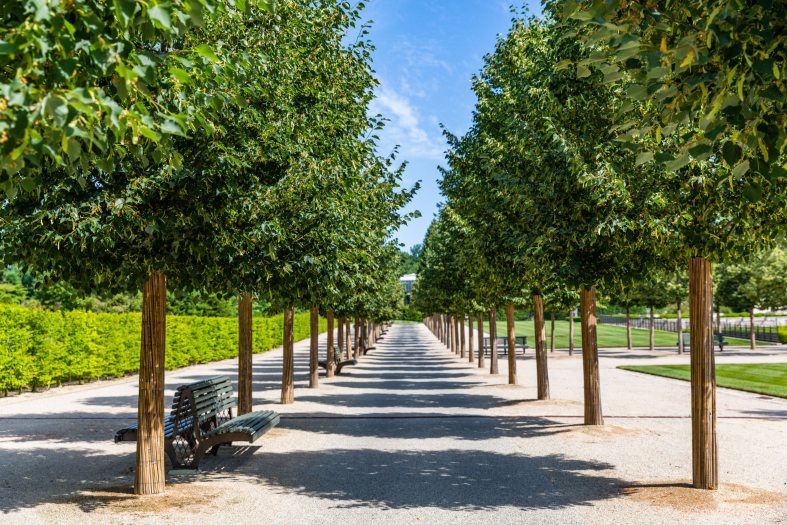 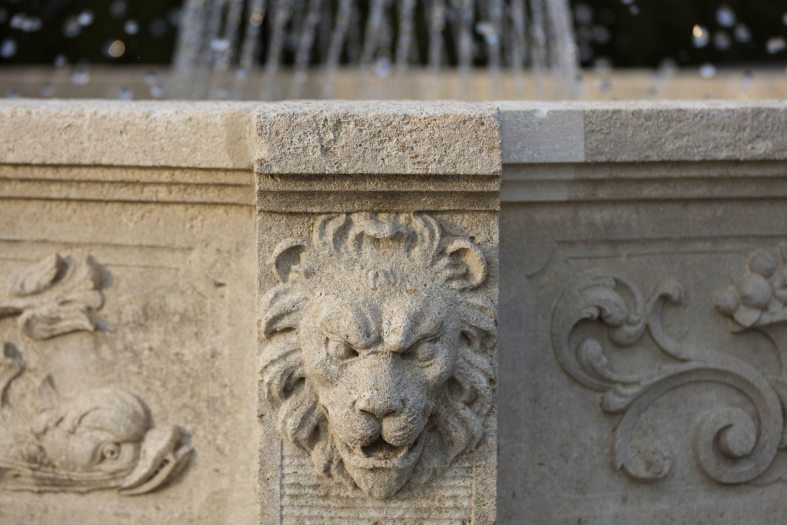 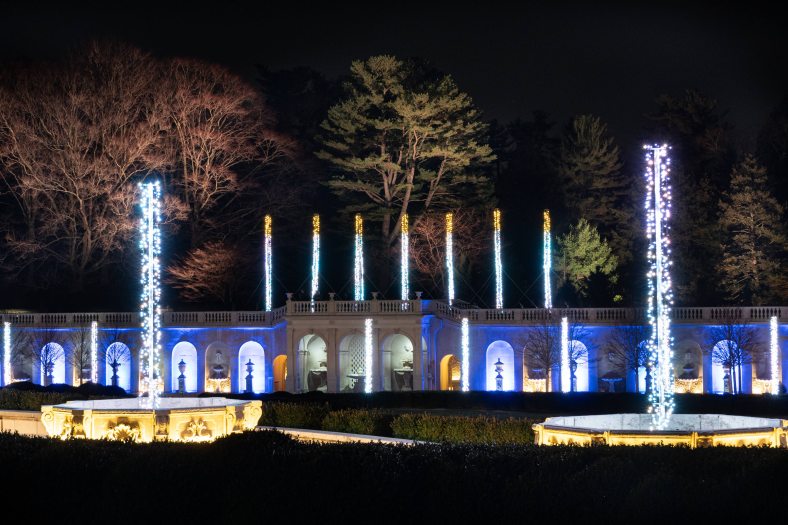 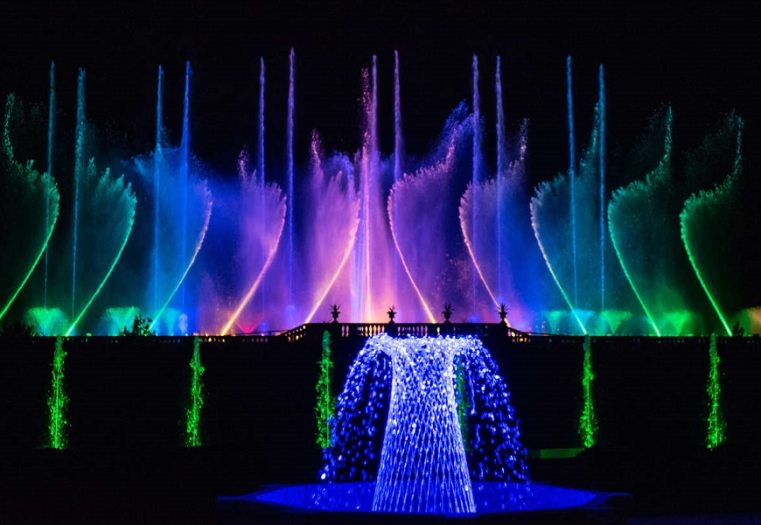 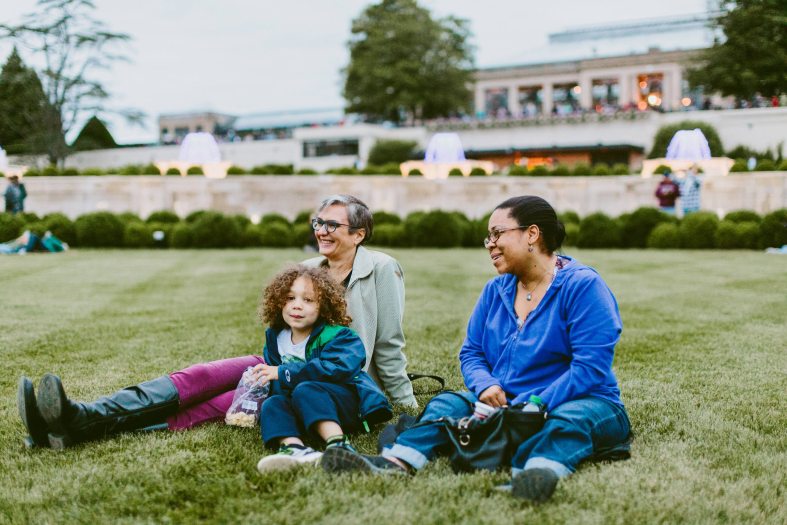 The seeds for the majestic Main Fountain Garden were planted when Pierre was 23 years old, while visiting the Columbian Exposition of 1893 in Chicago. While there, he was captivated by the great fountains, with their impressive feats of hydraulics and majestic beauty. In the years after he purchased the Peirce farm, his vision began to take shape. Visits to the legendary gardens and fountains of the Royal Palace at Versailles, France and the Villa Gamberaia near Florence, Italy, impressed him greatly. In 1921, after many of Longwood’s first fountain gardens had been designed, he looked east to the cornfields–with a great plan in mind.

By 1928, canals, circular pools, and a rectangular basin were added to the landscape, along with 380 fountainheads, a recirculation system of 18 pumps, and adjoining reservoirs. In total, the system held an impressive 675,000 gallons of water. Though the Main Fountains were turned on in 1931, the 5-acre garden was not completed until several years later. Limestone carved into decorative flowers, fruit, and water creatures were shipped from Italy by the Florentine firm Olivotti, helping to impart an old-world elegance to the industrial exuberance of Pierre’s design. The Main Fountain Garden, combining Italian ornamentation, French grandeur, and World’s Fair showmanship, became an engineering marvel of the most beautiful kind. The completion of the fountains marked the end of major construction during Pierre’s lifetime, completing a journey that began with his purchase of a 206-acre farm back in 1906, with the goal of saving a historic arboretum of trees.

After the passing of our founder, from the late 1950s until the 1990s, the Main Fountain Garden continued to evolve. Technological advancements and maintenance to the fountain’s infrastructure continued. In 1980, we debuted fireworks, adding yet another spectacular element to the fountain performances. Over 80 years after Pierre’s hydraulic masterpiece debuted, the stonework, fountain nozzles, and plumbing had begun to decay. The grand design was ready for a reinvention—one that kept the spirit and legacy of our founder alive, while looking forward to the future of Longwood Gardens. In 2014, New Heights: The Fountain Revitalization Project began. Spanning six years, it was the largest restoration project we’d ever undertaken. New fountains, new features, new seating, and improved accessibility were the end results of our massive efforts, spanning multiple teams and hundreds of people invested in preserving the vision of our founder, while ensuring that Longwood would continue to deliver the world-class experience for which we are known. 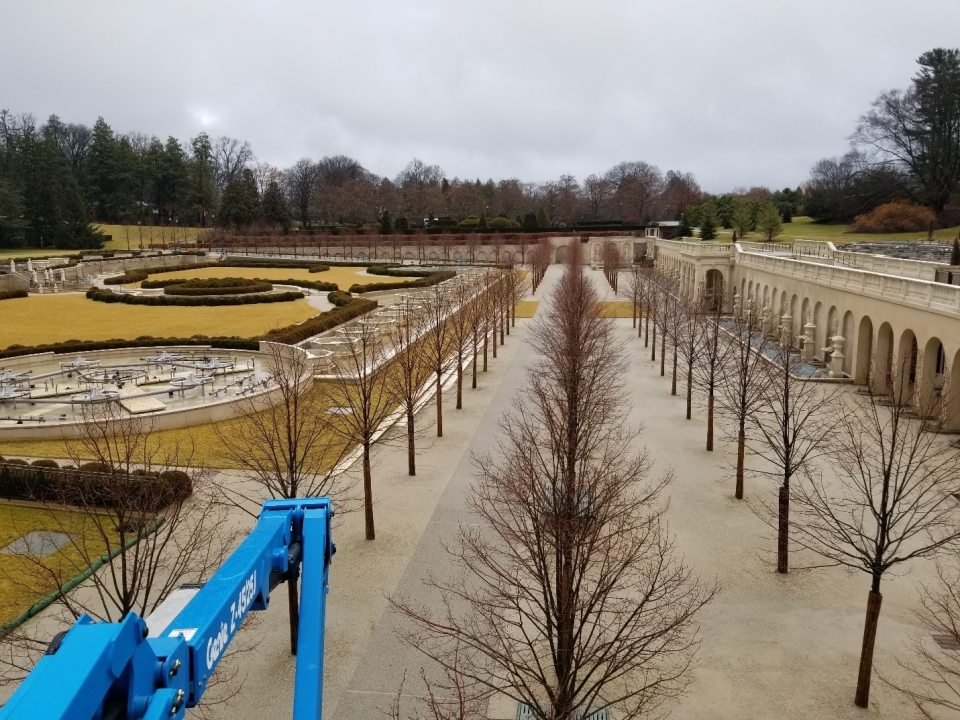 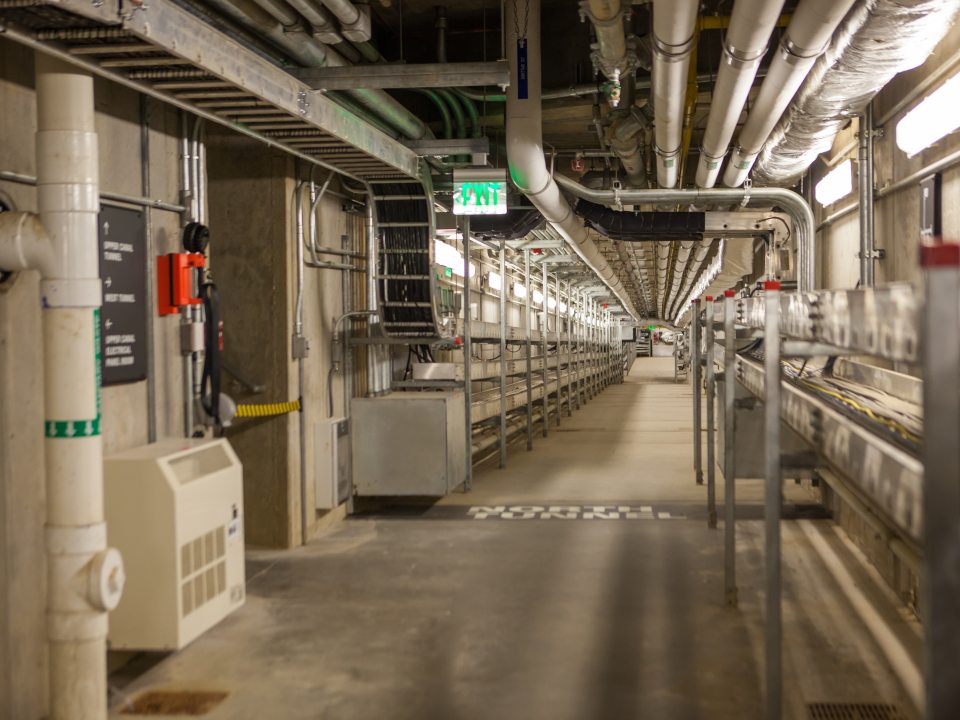 By Katie Mobley with Raymond Mackey, on May 7, 2019
Making Our Fountains Dance 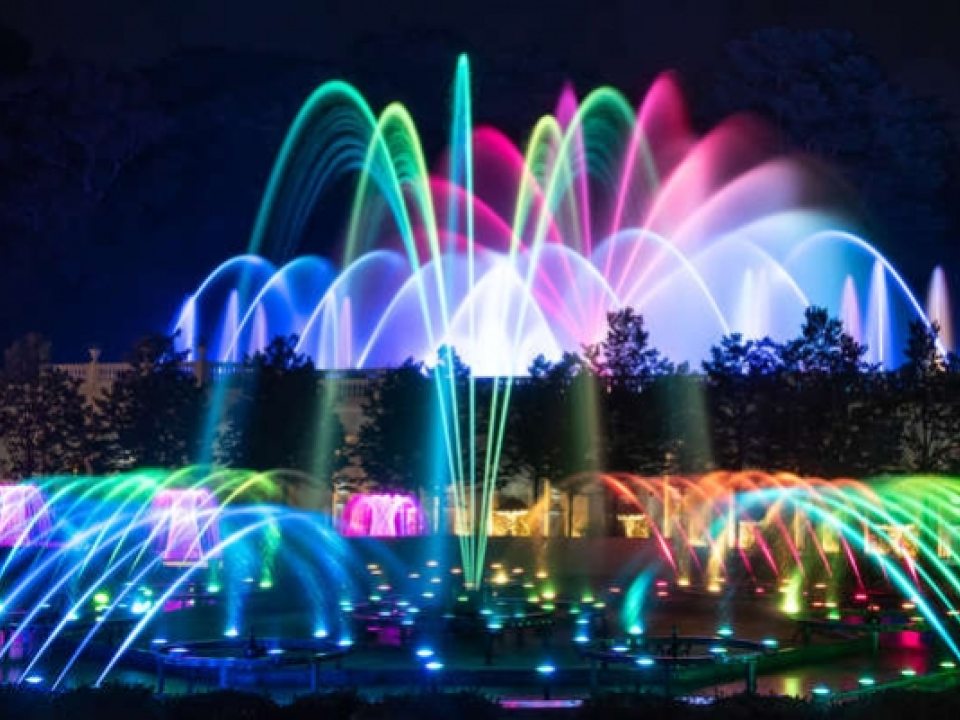