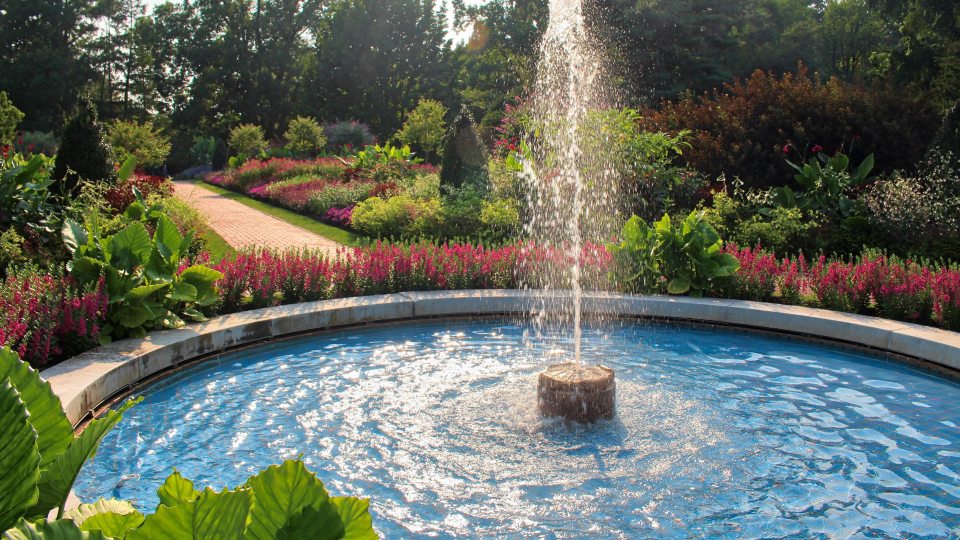 From April until the first frost, Flower Garden Walk comes alive with 600 feet of dazzling hues and botanical forms. One of our most popular (and most photographed) spaces, this was Longwood’s very first garden, designed by founder Pierre S. du Pont (1870-1954) soon after he purchased the property. Looking for more inspiration? Head south at the Round Fountain (another Longwood first!) down the stairs to the Compartment Gardens where the Square Fountain, spring-blooming wisteria and peonies, and more await your arrival.

Like all of our gardens, Flower Garden Walk takes a tremendous amount of behind-the-scenes work to achieve a constant display of harmonious color and design. During peak seasons, we change out 95 percent of the existing flowers, making way for exciting twists to our horticultural vision. Beginning in April, sweeps of 125,000 tulips, daffodils, ornamental onion, foxglove, fritillaries, Spanish bluebells, and more come into bloom. Summertime brings favorite annuals combined with grasses, native perennials, and showy tropical foliage and flowers. As the days shorten, our gardeners replace out-of-season plants with fall-blooming goldenrod, sage, chrysanthemums, and asters that remain in the garden through frost. It’s a lot of fun seeing it come to life and evolve, and nothing makes us happier than seeing our guests snap pictures of their loved ones in front of the blooms.

As you wander this area of Longwood, don’t forget to look up and enjoy an array of grand, stately trees, including a magnificent allée of 27 towering bald-cypresses (Taxodium distichum), planted by the Peirce family in the 19th century as well as Pierre many years later. Depending on where you start your stroll, you can have a quiet conversation upon the Whispering Bench to the east, or find yourself a shady seat at Dogwood Plaza on the western terminus of the walk.

Ever amused with surprising his guests, Pierre added three small specialty gardens, each surrounded by hedges of arborvitae and connected by hedgerow corridors, in 1908. These room-like spaces allowed for a sense of intrigue and delight as guests explored the area surrounding Flower Garden Walk. The legacy of the garden rooms continues today, featuring an updated selection of specimens and varieties for all of our guests to discover. After visiting the Round Fountain, follow the brick path south to see the beauty of these horticultural gems.

Please note: The Round Fountain has been turned off for the season and will return mid-April 2023. 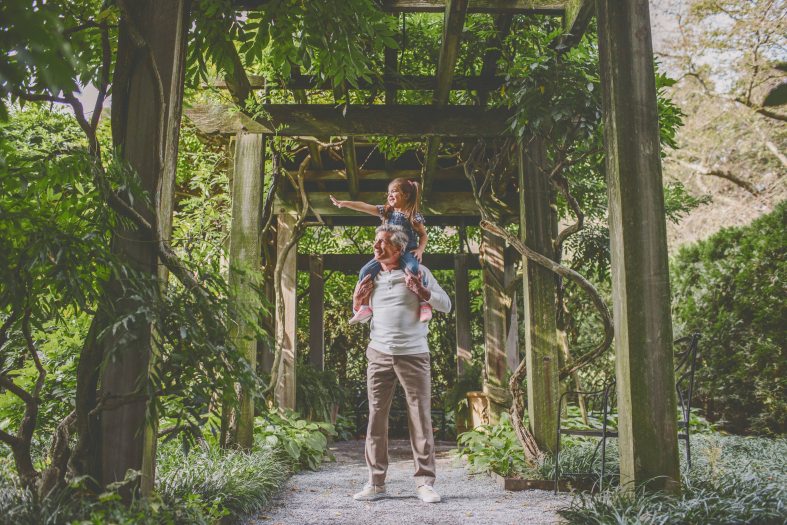 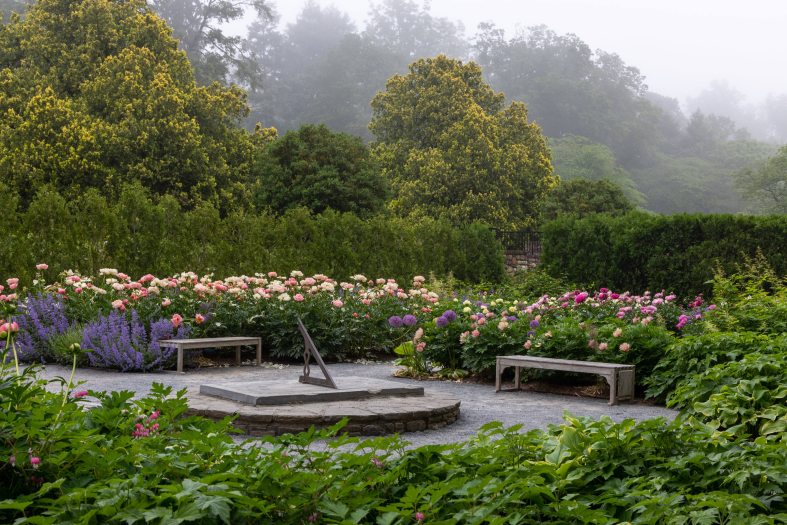 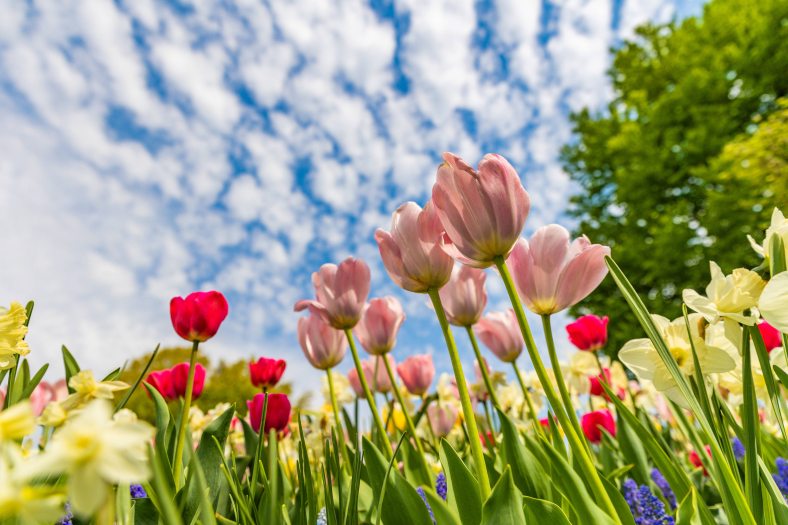 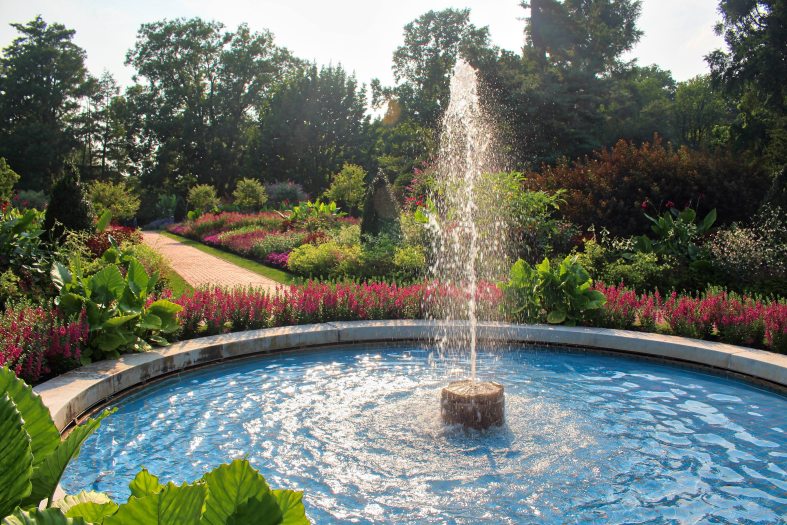 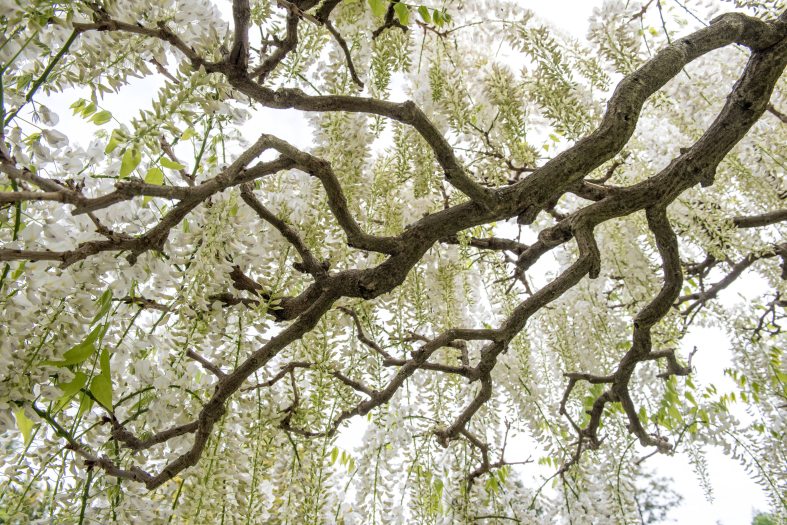 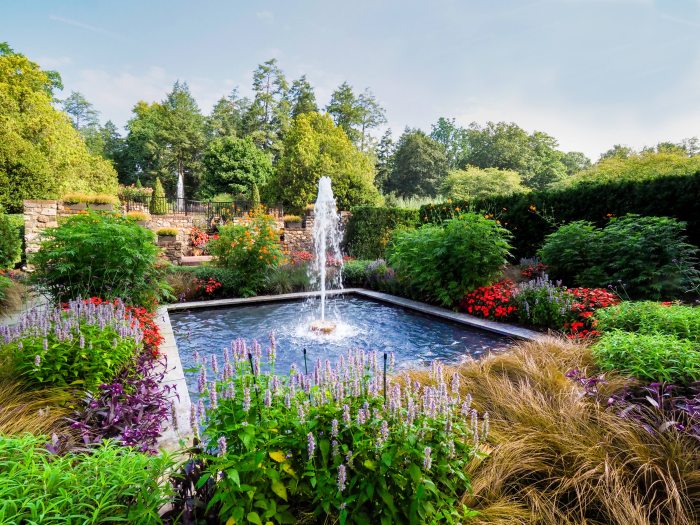 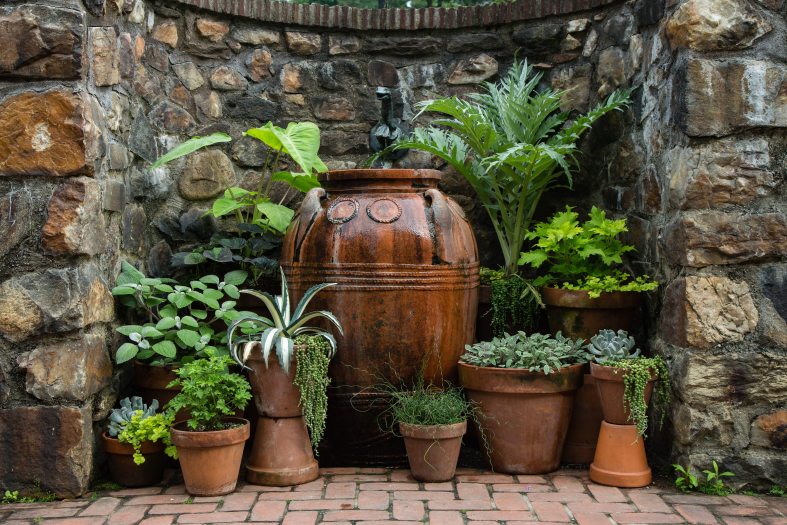 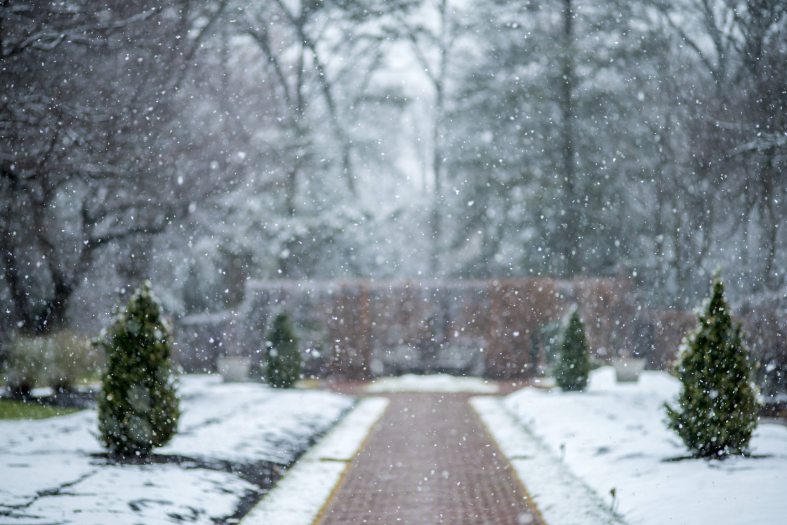 Enclosed on all sides by arborvitae, our Wisteria Garden is a space of botanical contradictions. The delicate fragrance and sensual beauty of the decades-old vines belie their gnarled, intensely invasive nature. We do appreciate a challenge, however, and the meticulous pruning and constant maintenance of the heavy limbs has resulted in tiered tree forms, allowing for a languorous, draped effect when the blooms come to life in May.

Initially planted with roses (and later with peonies) by Pierre, this garden was redesigned by Thomas Church in 1976, and has since featured lavender, purple, and white varieties of Japanese wisteria (Wisteria floribunda). Mark your calendars for May; it’s really not to be missed.

With the exception of a bit of restoration work, this garden has remained largely unchanged since its installation in 1908. The Square Fountain started its life at Longwood as a quiet reflecting pool placed just so, creating a mirror-like reflection of the trees, the hedge, and the sky as one descended the stairs into the sunken garden. Today you can enjoy intricate planting patterns and an ever-changing array of spring bulbs and summer annuals, as well as a fountain jet, which provides a soothing soundtrack to the experience.

Please note: The water features of this garden have been turned off for the season and will return mid-April 2023.

A short walk west of the Wisteria Garden and the Square Fountain is our “secret” garden room, where you’ll find a space abundant with peonies in shocking shades of pink, coral, and fuchsia. From mid-May through June, enjoy the blooms of eight cultivars of single-flowered varieties. Look for herbaceous cultivars Paeonia ‘Coral Charm’ as well as the gorgeous intersectional P. ‘Canary Brilliants’. Surrounded by a variety of perennials that bloom from spring through fall, this garden is ever-charming. A few of our team’s favorites include spring beauty Allium ‘Globemaster,’ with its giant orbs of purple, and the summer-fruiting highbush blueberry (Vaccinium corymbosum ‘Bluejay’). Always in season is the sundial in the midst of the garden, which lends a whimsical air to this cherished area of Longwood.

Soon after he took residence at his new property, Pierre began working on his plans for entertaining (and wowing) his guests at Longwood. During the winter of 1906–07, he designed his first formal garden, planted down the slope to the south of his residence. It was the perfect spot for the installation of an expansive garden landscape, perhaps foretelling the grand scale of his vision for future projects. Included in his design: a 600-foot linear walkway, hundreds of flowers, and of course, a fountain. He described this garden as the “old-fashioned type,” with nostalgic cottage-garden flowers, rose-laden trellises, a birdbath, and even a shiny gazing ball. In 1908 he added three enclosed garden rooms (now known as the compartment gardens), and in 1910 the Whispering Bench, which is still enjoyed by visitors today.

Pierre’s wife, Alice Belin du Pont, shared his passion for horticulture, and was influential in the creation of several design moments in Flower Garden Walk. The blue border, inspired by a family friend, was created with her guidance. Many of the garden’s notable perennial varieties, including daylily, phlox, peony, and rose, were likely added with her recommendation. Alice was particularly enamored of iris—a former Longwood gardener remembered that once, Alice paid $50 for one iris tuber.

Following Pierre’s death in 1954, the design of Flower Garden Walk evolved as we established more color over a longer season. We introduced annuals, bulbs, biennials, and long-blooming perennials, and height, texture, and color combinations were carefully planned to create a garden that presented Pierre’s vision for “sensational displays of exemplary horticulture…for the pure enjoyment of the visitor.”

In the 1970s, landscape architect Thomas Church collaborated with our teams to design the patio and sitting wall that connect Flower Garden Walk to the Open Air Theatre. In 1977, landscape architect Sir Peter Shepheard was hired to design a 35-foot brick wall, a grass median, and the planting of a European hornbeam (Carpinus betulus) hedge to frame the bench, thus better defining the space that leads into Peirce’s Woods. 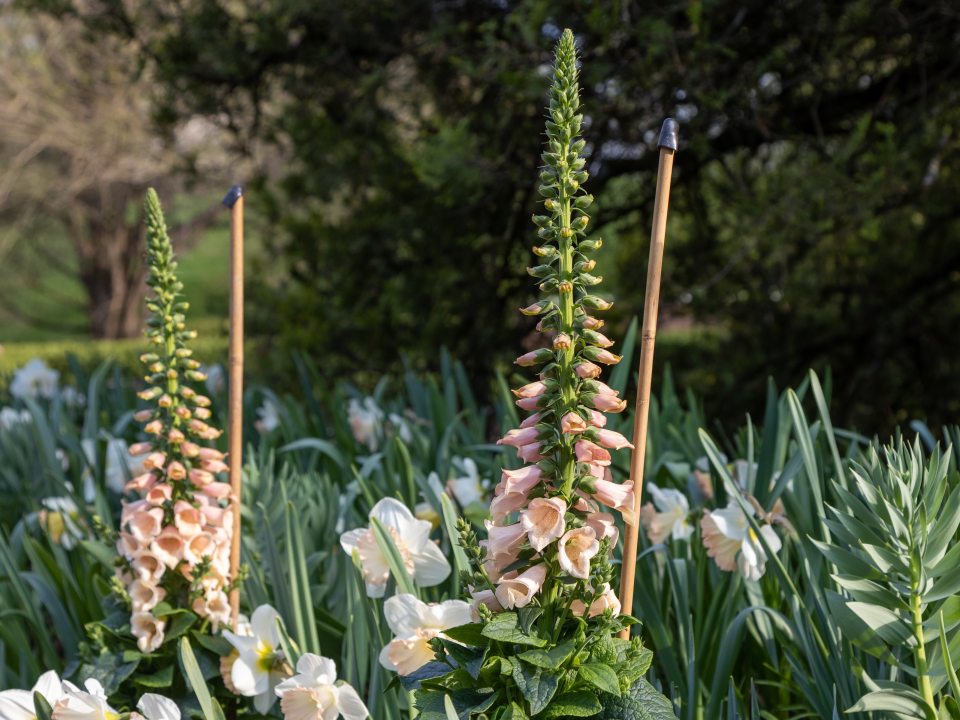 The Height of Care
By Katie Mobley, on April 29, 2021
Growing Dahlias at Home 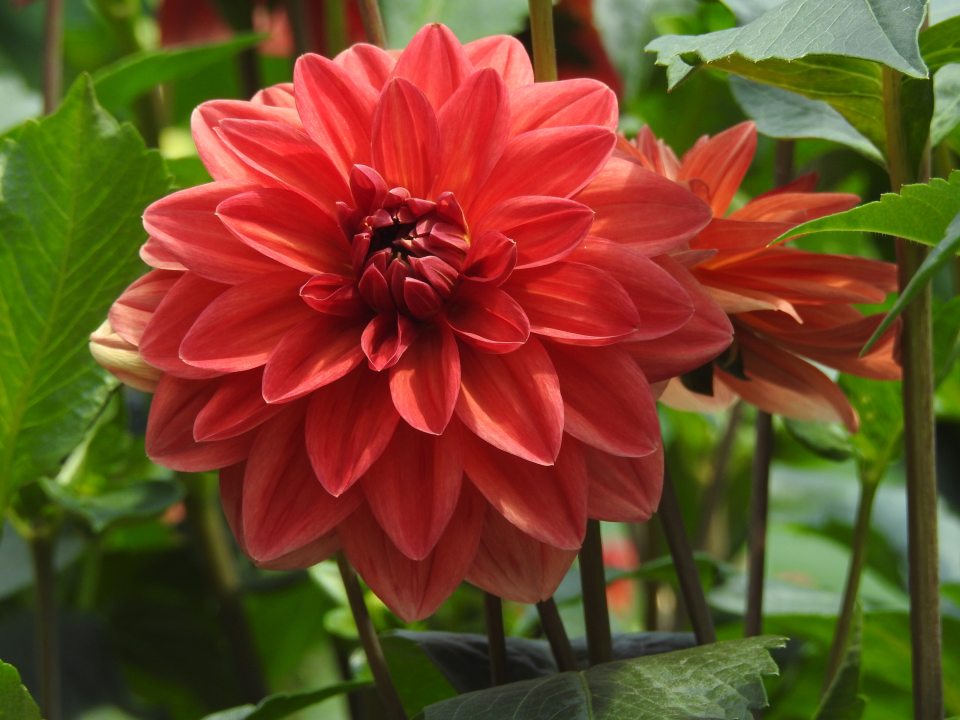 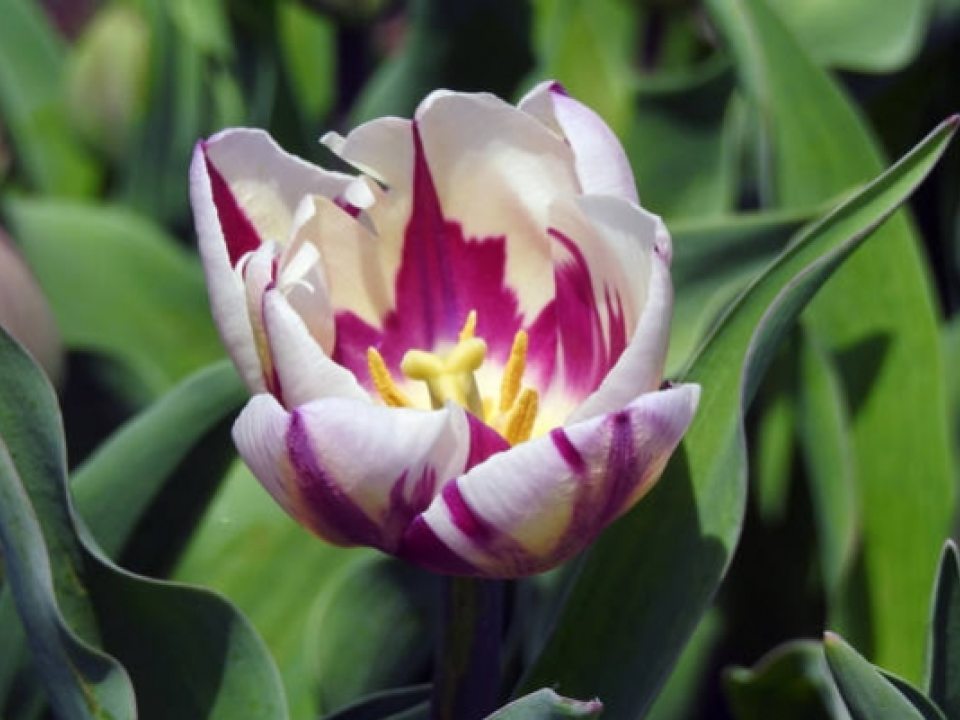 A Tale of Beauty, Rarity, and Mania 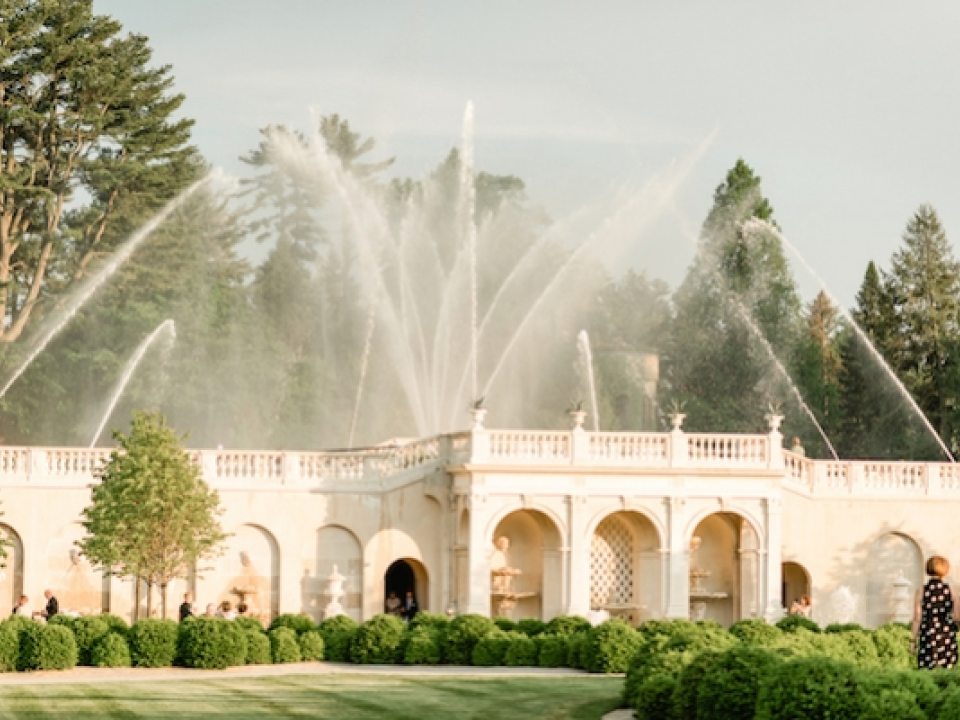 A Flourish of Fountains 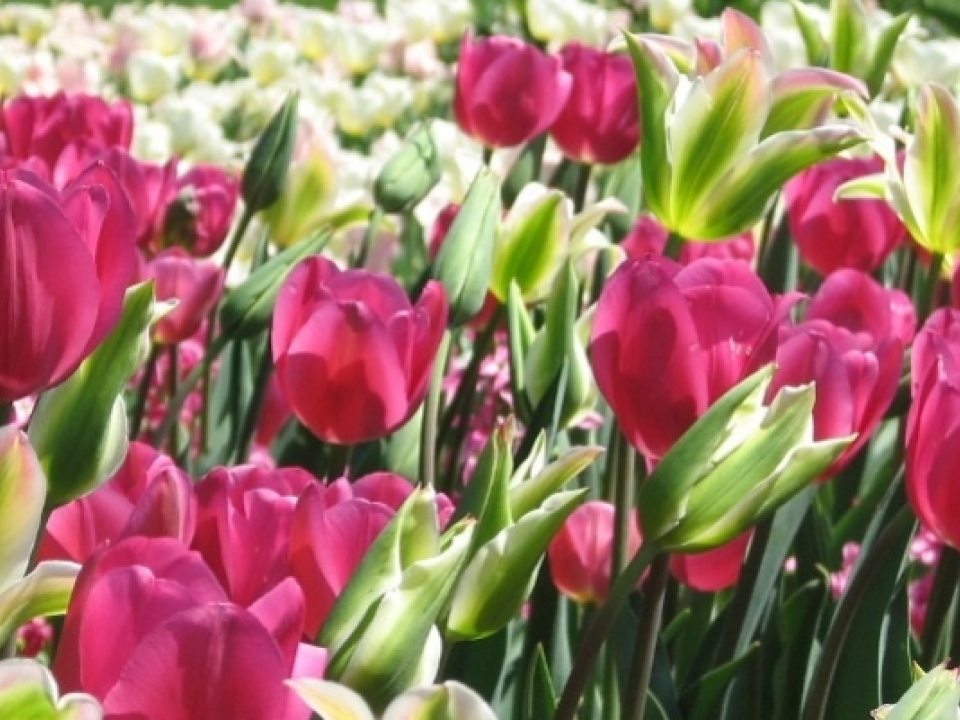