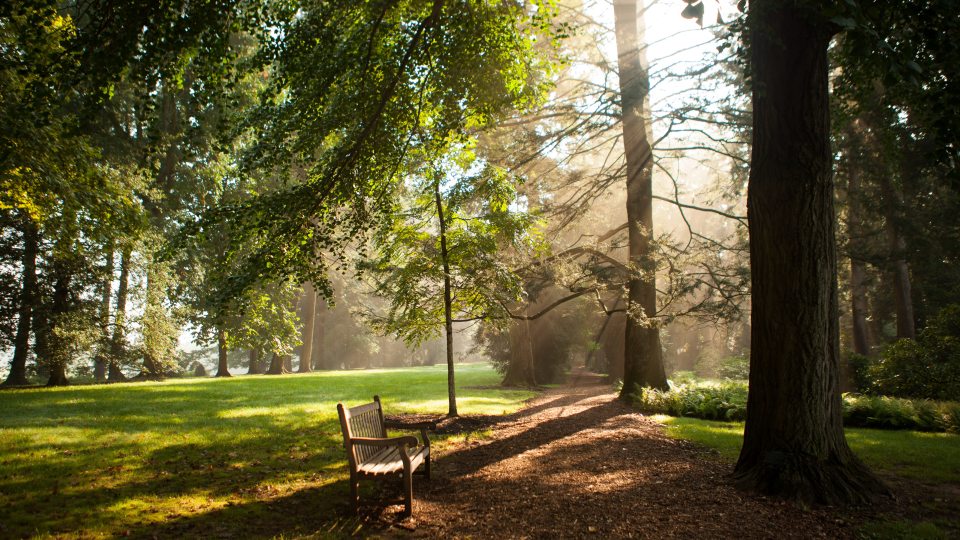 Step back in time as you explore Peirce’s Park, where the story of Longwood Gardens begins. Home of two notable allées of stately and spectacular trees, this area was restored by founder Pierre S. du Pont (1870-1954) following his purchase of the property in 1906. Look for stunning displays of woodland wildflowers from spring through fall as you marvel at soaring specimens, many of which are more than 100 years old.

In addition to the impressive botanical history of the area, there is more beauty to behold, nestled in the woods at the east of the park: the Sylvan Fountain, constructed by Pierre in 1926. Laid out in a semicircular shape with five water jets, the water system for the fountain is part of a larger system that also circulates through the Italian Water Garden. Throughout the spring, geophytes, rhododendrons, and bottlebrush buckeyes add horticultural interest to one of the more tranquil spots at Longwood. Come fall, hundreds of autumn-blooming crocus complement the fall color in the canopy above.

In 1990, landscape architect Sir Peter Shepheard designed new paths to be laid out through Peirce’s Park and Peirce’s Woods. His efforts to enhance guests’ journeys also improved the connection to the adjacent landscapes. Winding paths that reach the southern edge of the meadow provide new viewsheds into Peirce’s Park, emphasizing the open, scenic nature of this space. Additionally, Shepheard's efforts underscore the ongoing design ethos throughout Longwood, which emphasizes the relationship between formal and informal, providing a more fluid segue to the linear layouts of Flower Garden Walk and the Italian Water Garden.

Please note: The Sylvan Fountain is closed for the season. 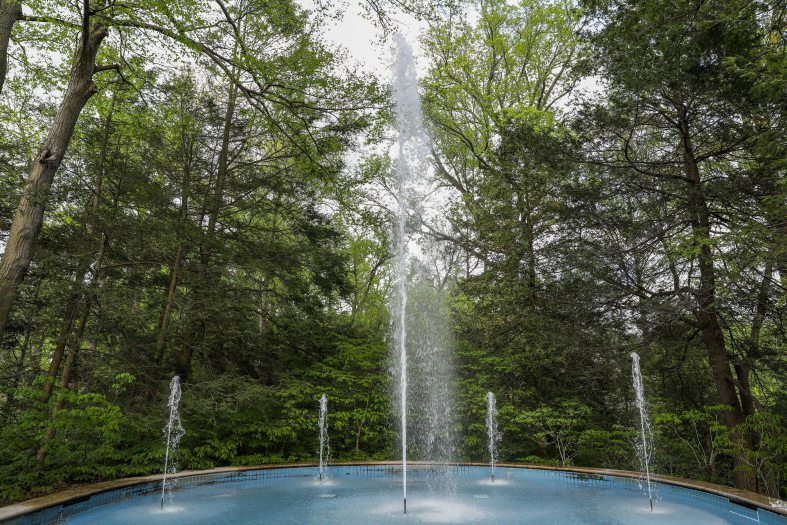 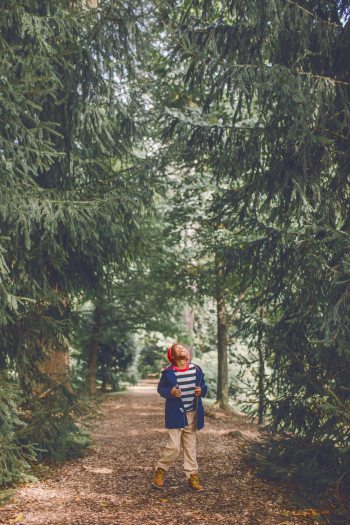 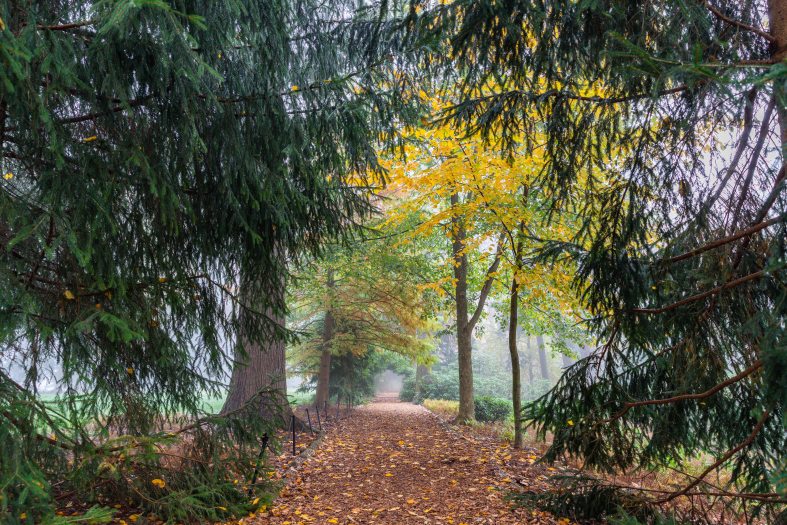 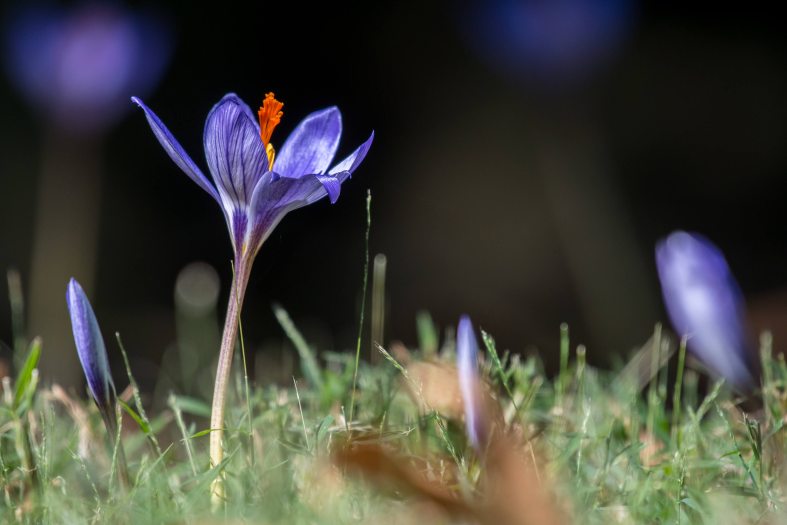 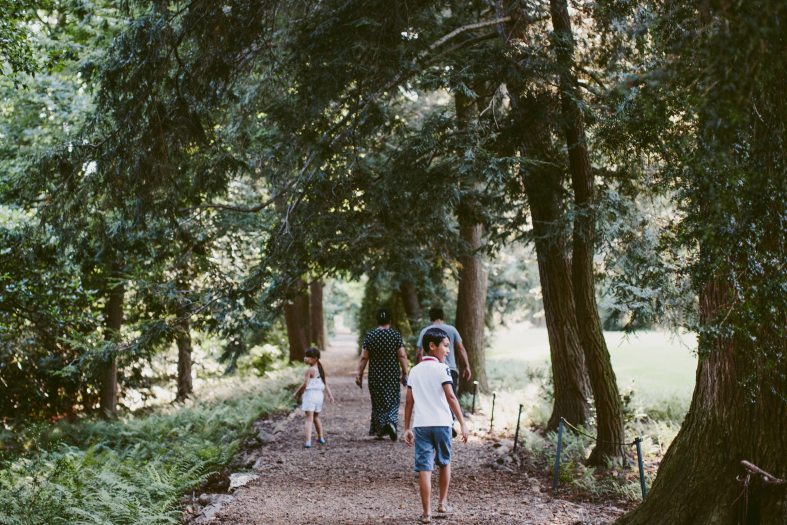 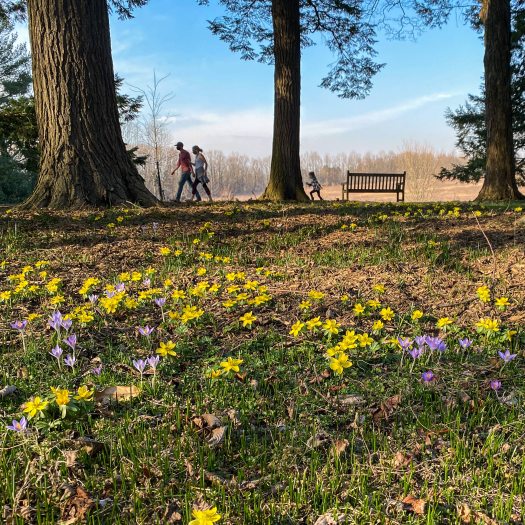 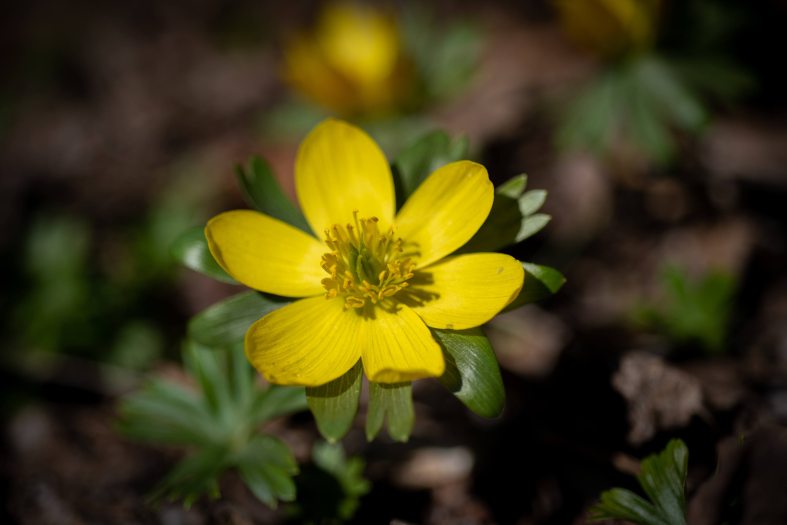 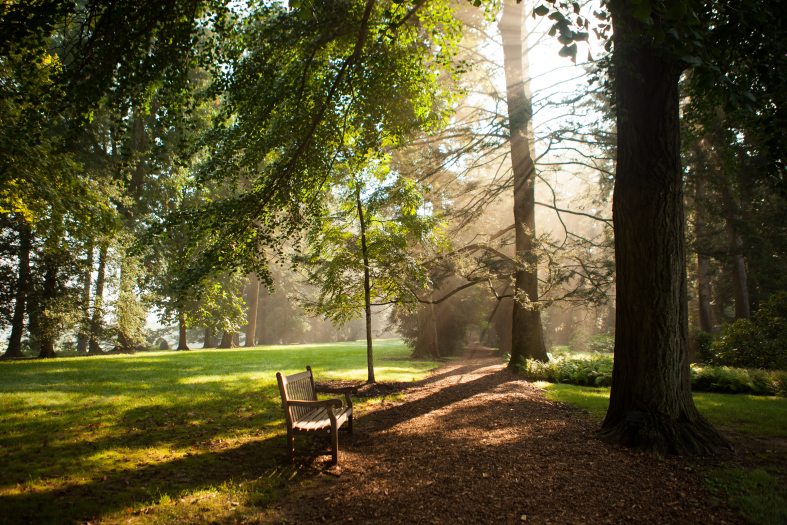 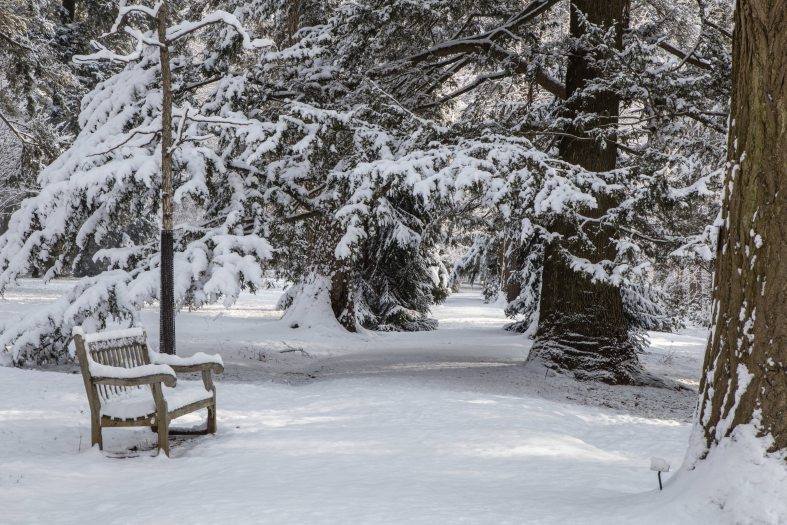 When William Penn granted Quaker George Peirce the right to purchase just over 400 acres in East Marlborough Township in the year 1700, he couldn’t have known he was setting a horticultural legacy in motion.

In 1805, Samuel and Joshua Peirce, farmers and the twin great-grandsons of George, inherited 189 acres of the original land. At the time, Philadelphia was known for botanical and horticultural excellence, due in large part to Quaker society’s support of the study of natural science, as well as the vogue for gardens among prominent gentlemen of the time. The brothers Peirce were passionate about collecting, and, at the time, their property was known as one of the most comprehensive and respected collections of plant material in the country. Few records exist regarding their rare and unusual collection of trees and shrubs, but native species were likely collected in the wild—horseback trips took the brothers as far as the Catskills of New York and the swamps of Maryland for their plant material. Rare, exotic species may have come through a network of Quaker plantsmen, including botanist, plant dealer, and cousin to John and William Bartram, Humphrey Marshall. One of the most interesting and notable trees they included in their collection was the Franklin tree (Franklinia alatamaha), collected by John Bartram in 1765 near the Altamaha River in Georgia. Today, all Franklin trees in cultivation are propagants of the specimens brought back by Bartram.

The trees that they planted in a double colonnade, or allée, east of the farmhouse, set the foundation for the spatial and visual relationships that we enjoy in Peirce’s Park today. Many of the trees you see were planted by the brothers themselves, augmented by Pierre over time.

In 1851, Joshua’s son George inherited the property and added new plant and tree selections to the arboretum, opening the land to the local community as a pleasure garden known as Peirce’s Park. For decades it was immensely popular with families and horticultural enthusiasts who gathered there on hot summer days to explore and enjoy the scenic view.

For the 25 years after George’s death in 1880, ownership of the land was dispersed, and little care was given to the arboretum or the park. In 1906, then-owner Lydia V. Bevans signed an agreement with a Lancaster lumber company for the harvest of the century-old trees, putting the future of Peirce’s Park in peril. With hopes of saving the arboretum, Pierre acted quickly for ownership of the property, then comprising just over 202 acres. He soon made it clear that he wanted to do more than just save the arboretum: He wrote to a friend of his intention to “have a great deal of enjoyment in restoring its former conditions and making it a place where I can entertain my friends.” The legacy of horticulture was established by the Peirce family a century prior, and Pierre, with his passion for plants, entertainment, and the latest innovations, restored the promise of Longwood’s future. 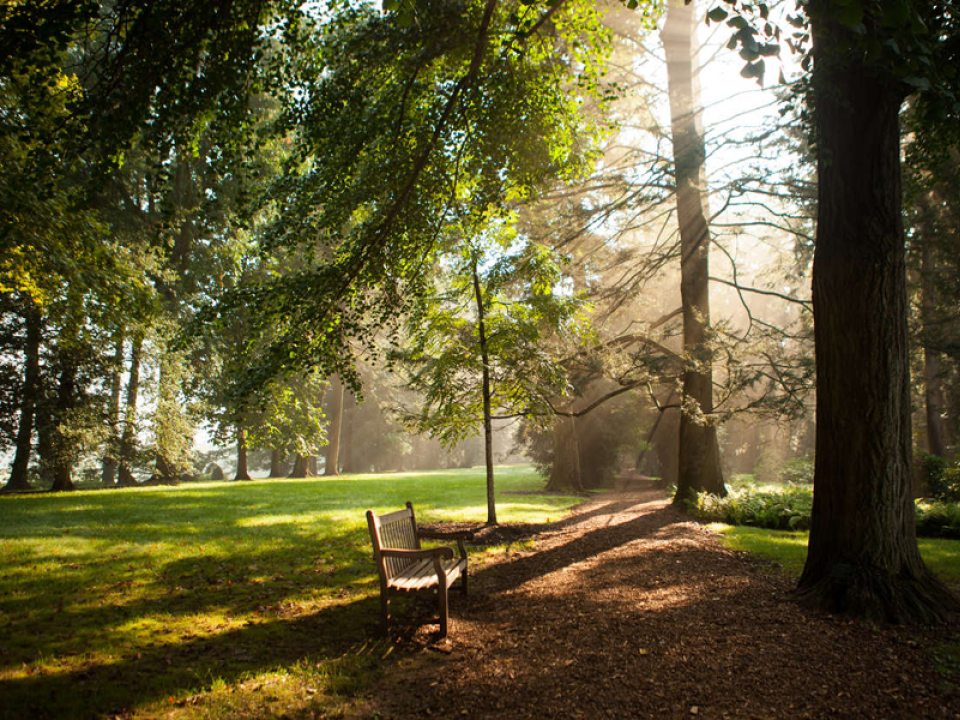 By Shawn Kister and Katie Mobley, on January 13, 2020
A Tree with a Story to Tell 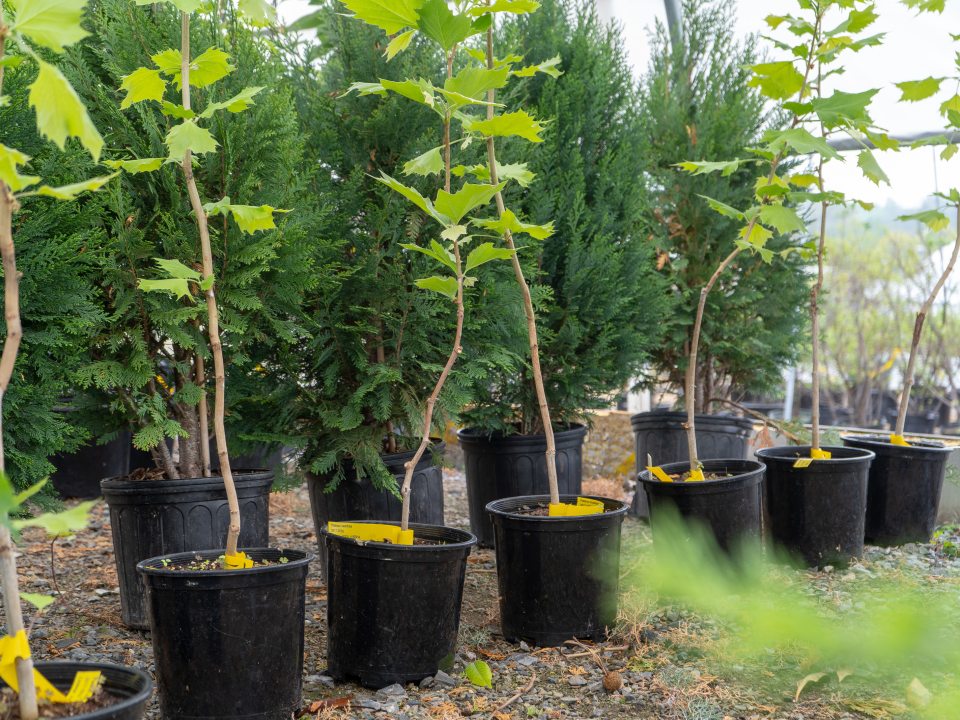 A Tree with a Story to Tell 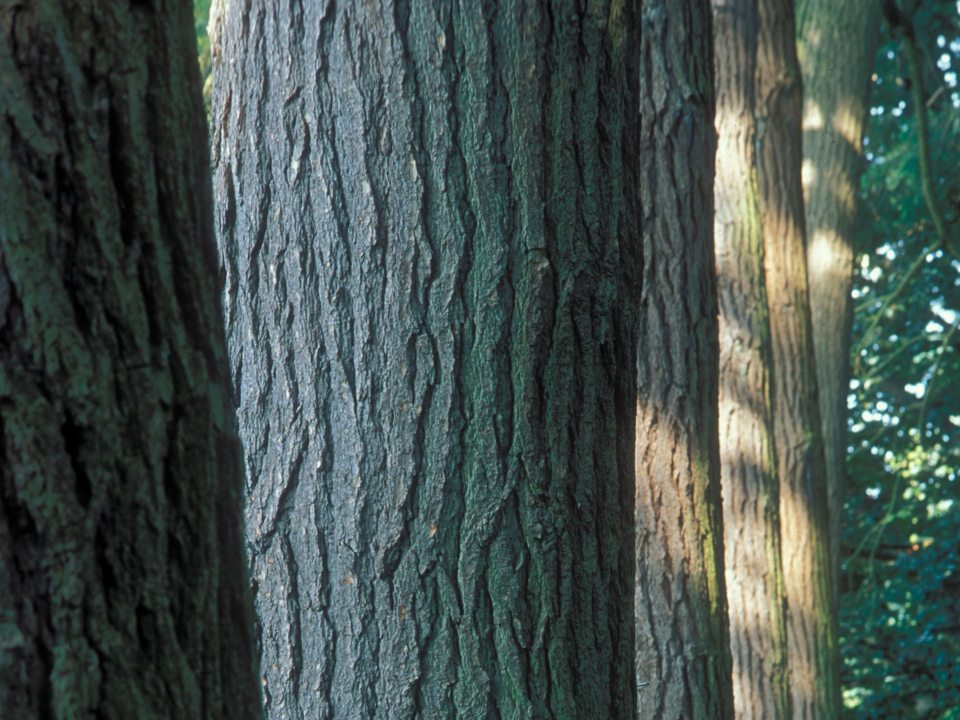 The Lore of Our Trees